Addendum: Please note that this car does in fact have a three-speed manual transmission. Therefore, it should not be referred to as a Powerglide transmission.

In 1955, Chevrolet released its new, reliable, and powerful small-block V-8 engine and, in so doing, created what would become an automotive legend. The V-8 powered Bel Air provided significant value for the $3,170 base price and revolutionized the “low-price” market space. An immediate success, the Bel Air became the best-selling American car of 1955, with nearly 771,000 examples produced.

Chevrolet’s Bel Air was the top series and included everything standard on the lower priced models, plus a lot more comfort, convenience, and styling enhancements. The series added richer upholstery fabrics, horizontal chrome strips on the sides of the front fender and doors, and Bel Air script, just to name a few. The 1955 Chevrolet Bel Air Convertible came in a number of exterior and interior colors, both solid and two-tone. Although there were a wide assortment of body styles and models to choose from, less than 10% of production cars were Bel Air convertibles, thus making them the most desirable and sought after Chevrolet of that year.

This exquisite Shoreline Beige over Gypsy Red convertible is presented with the 265 horsepower powerpack V-8 with a four-barrel carburetor and a three-speed manual transmission with overdrive. It has many options, including power steering, power brakes, an oil bath air cleaner, power window washers, a power seat, power windows, a power convertible top, a Wonderbar radio, a tissue holder, seat belts, an electric light dimmer on the dash, dual working spot lights and mirrors, a full chrome package, fender skirts, a Continental kit, wire wheel covers, and an illuminated parking brake. The folding top appears to hardly been used and fits perfectly, as do the outstanding upholstery and door panels. Similarly, all of the trim and chrome fit exceedingly well on the straight body. It has been completely and professionally restored with the body off the frame, and it is in nearly new condition, with under 1,000 miles logged since completion. 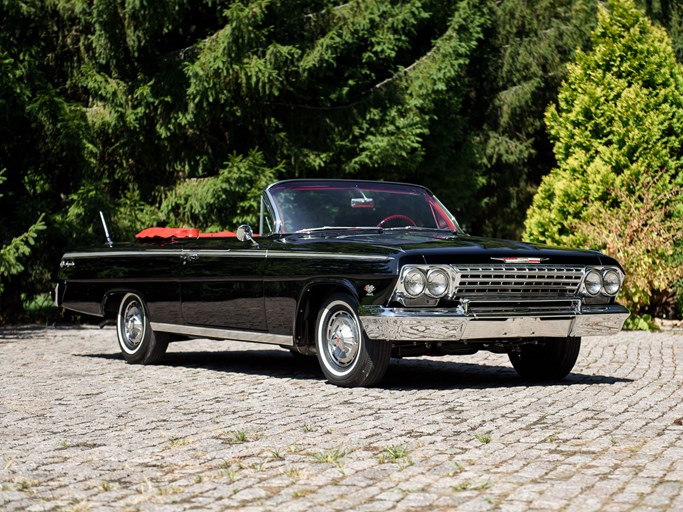