WATCH VIDEO A FIRST IN F1 HISTORY REAWAKENING OF A CHAMPION
Chassis No.
Engine No.
25A-01
FX038-01
Please note that this lot is sold on a Bill of Sale.
□ TEMPORARY IMPORT (UK)

By any standard, McLaren-Mercedes MP4-25A-01 is a highly significant chassis in the 70-plus year history of the FIA Formula 1 World Championship. In the hands of Lewis Hamilton, already a Driver’s Championship-winner with McLaren-Mercedes in 2008, it claimed victory at the 2010 Turkish Grand Prix; notably, it was also driven to the podium by his teammate Jenson Button, 2009’s reigning Driver’s Champion. Arguably the best team of drivers in the field with a competitive car at their disposal, they were amongst the frontrunners for the 2010 World Championship and had many years of competitive racing in Formula 1 ahead of them.

The car offered here, chassis number 25A-01, was the first MP4-25A built for the 2010 Formula 1 World Championship and would see use with both Hamilton and Button over the course of nine separate races held on three separate continents. A Formula 1 car raced by two World Champions in period is a truly rare thing, and with Lewis Hamilton now the most successful Formula 1 driver of all time, its significance becomes even more profound.

A HAMILTON MASTERCLASS IN MALAYSIA; 2ND IN CHINA

This chassis’ first race was with Lewis Hamilton at the Malaysian Grand Prix, the third round of the season. After the McLaren team misread the incoming wet weather during qualifying for the Malaysian Grand Prix, Hamilton was left with a distant 20th on the Sepang grid. Undaunted, Hamilton quickly showcased his prowess as a driver from the start, flying through the field to reach 10th by the fourth lap. Over the course of the following three laps, Hamilton successfully passed Vitaly Petrov for 9th, then continued to charge through the field. Chassis number 01 finished 6th—an incredible 14 places ahead of where he qualified—ably showcasing Hamilton’s raw talent as a driver.

Two weeks later in China, Hamilton was back behind the wheel of MP4-25A-01, ultimately finishing a close 2nd behind teammate Button in tricky damp conditions. His run to the podium from 6th place on the grid was aided by his claiming of the race’s fastest lap on lap 13. The result was the first 1-2 finish for English drivers since the 1969 Monaco Grand Prix, won by Graham Hill ahead of Piers Courage.

On its third outing, Hamilton gave MP4-25A-01 another top-five finish, this time on the harborside streets of Monte Carlo. From a team perspective, the finish was disappointing, as it meant Mercedes-McLaren dropped from first to 3rd overall in constructor’s championship behind Red Bull and Ferrari, respectively. McLaren-Mercedes needed a stronger finish in two weeks’ time at the Turkish Grand Prix—and Hamilton would deliver.

Turkey was next on the 2010 calendar, and the trip to the challenging Istanbul Park proved fortuitous for Hamilton. As in Shanghai, he qualified on the front row. Starting from 2nd on the grid behind Red Bull’s Mark Webber, the Australian held a lead of just 0.4 seconds over Hamilton and chassis number 01 by the end of the first lap.

Attempting to take the lead on both the third and fourth lap at turn 12, Webber retained the top spot and the pair both made a pit stop during the 16th lap. Hamilton’s pit crew had trouble fitting the car’s right-rear tyre, resulting in Hamilton falling to 3rd place behind Sebastian Vettel. Coming out of the pits, it was a Red Bull and McLaren-Mercedes fight for the top four spots, with Jenson Button behind Hamilton and Vettel, and Webber in the lead. During the 39th lap, Vettel caught Webber and the pair made contact, sending both Red Bulls off the track and thus propelling Hamilton into the lead and Button to 2nd place.

Team tactics dictated that Hamilton would retain the lead, yet Button had ideas of his own. Despite being passed on the 48th lap, Hamilton quickly regained the lead and took the chequered flag. This was Hamilton’s first win of the season and the 12th win of his Formula 1 career. Button crossed the line 2.6 seconds later in 2nd, with Webber 3rd. Hamilton’s win returned the team to the top spot of the constructors’ championship, leading by just one point over Red Bull, and put Hamilton 3rd in the drivers’ championship. This was no doubt a day for both Hamilton and McLaren-Mercedes to celebrate.

That seminal Turkish victory would be Hamilton’s final race in MP4-25A-01, as Button stepped into the racing-winning chassis for five further Grands Prix starts in Singapore, Japan, Korea, Brazil and, finally, Abu Dhabi. Those races produced four further top-five finishes, concluding in style with a send-off podium in Yas Marina.

There it would remain until its restoration to as-raced specification in 2019, after which it would be sold from the factory. In the intervening years, meanwhile, Hamilton’s unprecedented record of success—and his legacy beyond motorsport—only continued to grow.

A PIVOTAL CHASSIS FOR THE WINNINGEST DRIVER IN F1 HISTORY

Now a seven-time Formula 1 World Champion and 2021 Laureus Athlete Advocate of the Year, Lewis Hamilton is rightly respected as an icon in the world of racing, and one of the greatest athletes in modern sport. Moreover, Hamilton has become a force across multiple arenas—a talented fashion designer, skilled musician, Hollywood tastemaker, champion for environmental change, and social activist.

Following in the footsteps of athletes like Jesse Owens, Venus and Serena Williams, and Muhammad Ali, Hamilton has broken down racial barriers in his sport and used his influence to bring important issues close to his heart to the global stage and, seeking to make the world a better place. With an active social media presence, Hamilton can interact directly with his fans to champion issues close to his heart, giving him influence and impact like no other Formula 1 World Champion before him.

None of this, of course, has come at the cost of his consummate skill behind the wheel. Now tied with Michael Schumacher’s seven World Drivers’ Championship titles, Hamilton has in fact surpassed Schumacher’s record of race wins, poles, podiums, and total points—despite having competed in fewer races than Schumacher to date.

It is particularly meaningful, then, that Hamilton had his first wheel-to-wheel battle with Michael Schumacher in this very chassis during the only season in which their careers overlapped. En route to his 2nd-place finish at the 2010 Chinese Grand Prix, Hamilton encountered Schumacher on lap 15. He and the German Formula 1 great would have a thrilling battle over the coming laps, with Schumacher skilfully fending off Hamilton’s attempts to overtake until Hamilton successfully pulled ahead on lap 26.

In this car, one can witness the evolution of Hamilton’s career into the calculating strategist beloved by Formula 1 fans today; MP4-25A-01 is thus rightly viewed as a tool that helped strengthen and solidify Hamilton’s place in motorsport history.

Importantly, this is no mere piece of signed memorabilia or a show car suitable for display only: Thanks to the support of McLaren Racing Heritage and Mercedes AMG High Performance Powertrains (HPP), it is now presented in ready-to-drive condition.

It should come as no surprise that returning chassis MP4-25A-01 to track-readiness demanded expert care and close attention to detail; indeed, its restoration was a challenge best handled by its original constructor. Maintained in storage since the completion of the 2010 Formula 1 season, the car was restored by McLaren Racing Heritage in 2019.

The scope of the work included a complete teardown of the car, after which all safety-critical items were inspected, X-rayed, tested, and replaced as needed. The engine was sent to Mercedes AMG HPP for a “health check”; all fuel systems were rebuilt, and all perishable components were replaced at this time. A track test was performed following the conclusion of these tasks to confirm proper operation.

Ahead of this ground-breaking auction, MP4-25A-01 was again thoroughly inspected by McLaren Racing. Work spanning 2020 and 2021 included the removal of all bodywork, as well as the floor of the car, and the examination of its front and rear wings and all safety-critical componentry. Mercedes AMG HPP reviewed the engine once more, and the car was started up following the replacement of all fluids. After the refit of all bodywork, a geometry check was performed.

The result of this scrupulous care is an icon of motorsports history that still possesses its track-ready potency and ferocity. MP4-25A-01’s restoration and subsequent maintenance has retained the patina the chassis earned during the 2010 season, preserving its as-raced aura.

A UNIQUE PIECE OF HISTORY, AN UNREPEATABLE OPPORTUNITY

In perhaps the most thrilling first for fans of both modern motorsport and vintage racing, the still-potent performance of the McLaren MP4-25A-01 will be shown on-track immediately after F1’s first Sprint Qualifying Race at Silverstone on Saturday, 17 July. Not simply part of a static lot, this example will be operating as intended—at high speed, with a professional driver at the wheel, around an F1 circuit on an F1 race weekend. Certainly, it is a ground-breaking and uniquely a dramatic way of displaying the abilities of chassis 25A-01. Coupled with what could be the largest auction audience in history with potentially up to 140,000 fans in attendance, the moment will be one as equally significant as the car itself.

A massive technological achievement, with its innovative aerodynamics and futuristic materials, the McLaren MP4-25A-01 is a product of British ingenuity paired with a German powertrain. Proof of its on-track prowess over the British Grand Prix weekend will be an emotional homecoming for many Formula 1 fans.

For the ultimate motorsport enthusiast, this Lewis Hamilton grand prix-winning McLaren-Mercedes is not just the first sale of its kind: It is a piece of automotive memorabilia that would be impossible to replicate—an opportunity that is, like the incredible trajectory of Hamilton’s astonishing, ongoing Formula 1 career, unrepeatable in the truest sense. 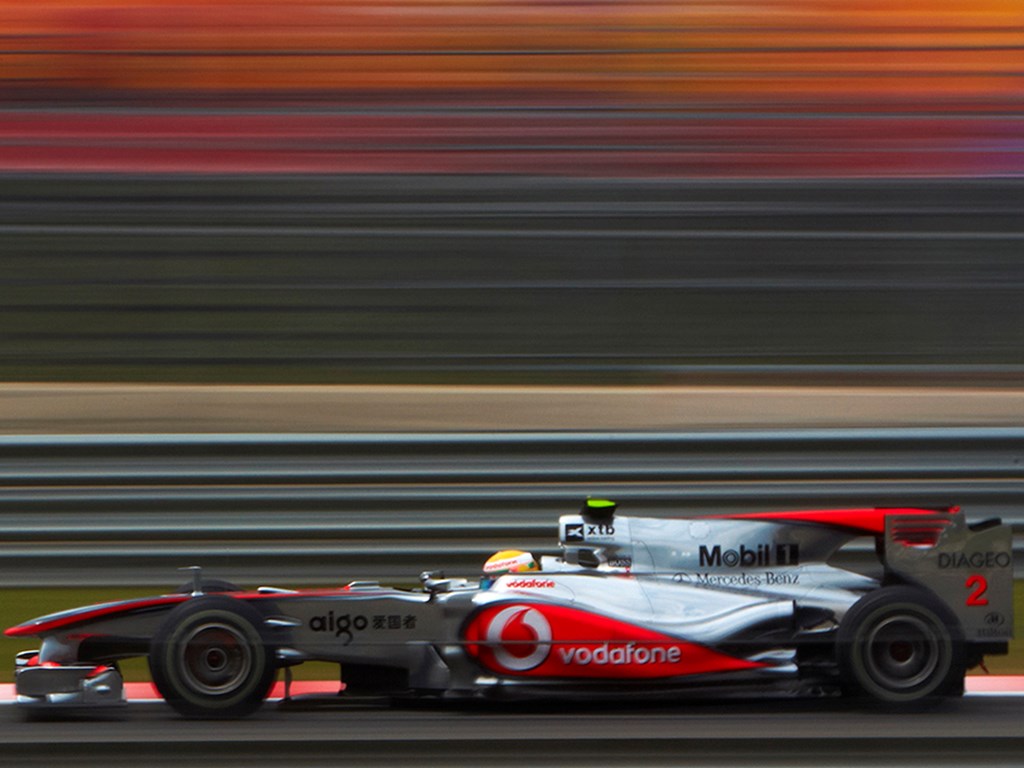