Chassis No.
ZA9AB01E0RCD39068
Serial No.
068
Engine No.
063
Addendum: Please note that an import duty of 2.5% of the purchase price is payable on this lot if the buyer is a resident of the United States. Please note the title for this lot is in transit. A 4-6 week delay is expected.

Resuscitating a dormant marque of legendary renown is one of the most difficult and intriguing pursuits that occasionally transpire in the automotive sector. Expectations are so high, and scrutiny is so overpowering, that few such ventures can overcome the odds and ultimately deliver on their promise. And yet despite the inherent difficulty of such a pursuit, the cars created under such circumstances are often some of the most beguiling of automotive jewels—indelibly unique thanks to their ephemeral blueprint.

This paradigm was particularly evident in the story of Italian entrepreneur Romano Artioli, who in the late 1980s acquired the trademarks to the hallowed Bugatti with plans to manufacturer a world-class supercar under the identity of one of Europe’s most celebrated prewar manufacturers. Unfortunately, Artioli’s efforts were sunk by the notorious early-1990s collector car market crash, ultimately dooming his Bugatti Automobili to financial ruin. But despite the company’s untimely demise, the Italian Bugatti’s core product—the explosively powerful and aesthetically arresting EB110—is justifiably regarded as a worthy successor to such classic prewar Bugatti models as the Type 35, Type 46, and Type 57 SC.

Relentlessly developing his dream atop the crest of the late-1980s economic surge, Artioli even commissioned his own factory, a stylish modern facility whose scale amply testified to the man’s ambition. Although the Bugatti Automobili concern was founded in the Modena municipality of Campogalliano, within the noted automotive hotspot affectionately known as Motor Valley, it is likely that Ettore Bugatti, himself, would have appreciated the grandeur and technical sophistication of Artioli’s architecturally imposing facility.

As impressive as the new Bugatti headquarters were, the campus was ultimately outshined by the cars produced there, the EB110 GT and its more potent uprated sibling, the EB110 Super Sport. Commemorating the 110th anniversary of Ettore Bugatti’s birth, the EB110 was built on a chassis originally conceived in aluminum by the great Paolo Stanzani, and later reimagined in carbon fiber by Nicola Materazzi, the former chief engineer of the Ferrari F40. Carbon fiber has since become an industry standard in the build of modern supercars, highlighting just how ahead of its time the EB110 was.

It is furthermore notable that construction of the advanced carbon fiber frame was contracted to the French aerospace concern Aérospatiale, ensuring the levels of tolerance and quality control for which the aviation industry is highly regarded. The advanced composite material was chosen because the originally planned material, aluminum honeycomb, was ultimately deemed to be too flexible for an ultra-high-performance mid-engine machine. This chassis was clothed in striking bodywork that had been developed from a concept design by the legendary stylist Marcello Gandini and reimagined in production form with refinements by Giampaolo Benedini (an architect related to Artioli).

The EB110’s motive power was provided by a distinctive 3.5-liter quad-turbocharged 60-valve V-12 mated to a six-speed manual transmission. A finely tuned all-wheel-drive system, yet another foreshadowing of today’s supercar technology, helped tame the V-12’s 553 horsepower while ensuring that the EB110 would be as tractable as it was trackable. The proprietary mill was capable of launching the EB110 from standstill to 60 mph in just 4.4 seconds, with a top speed of 212 mph. As the storied motor racing veteran Phil Hill gushed after testing the model for Road & Track, “You can cruise at over 200 mph like you’re on an ordinary road. It’s just an outstanding car.”

Delivering world-class performance packaged in aesthetically refined yet sporty coachwork, the EB110 was built in a modest quantity that included approximately 85 examples completed to GT specifications. Prized by both marque collectors and supercar aficionados, the model has evolved to encompass a very special cachet—viewed as a unique mid-point between Ettore Bugatti’s original concern and today’s Bugatti S.a.S.—without which no Bugatti collection can truly be deemed to be complete.

Benefitting from a short ownership chain of a handful of doting collectors, and attention from some of the world’s most respected EB110 specialists, this Bugatti is a particularly noteworthy example of the celebrated Campogalliano supercar. According to the research of Johann Petit’s Bugatti EB110 Registry, chassis number 068 is approximately the 51st of 85 examples built to GT specifications, and it was completed as a second-series car equipped with a revised cooling system and a modified rear bumper.

Ordered in May 1994 by the dealer Zdenek-Auto on behalf of a client in the Czech Republic, the Bugatti was finished in Bugatti Blue paint and appointed with an interior upholstered in dual-tone gray leather in a non-standard special-order configuration. After being delivered to the first owner in August 1994, the EB110 was frequently enjoyed on the open road while being consistently maintained.

In 2001 the Bugatti was sold to its second owner, another enthusiast residing in the Czech Republic, and he immediately submitted the car to the specialists at Dauer Sportwagen in Nuremberg, Germany—the company responsible for the Le Mans-winning Dauer 962, and the officially licensed continuation builder and servicer of EB110 examples following Bugatti Automobili’s receivership. At this time the original engine number 090 was replaced by the motor currently installed, engine number 063, a correct GT-specification motor. The car was also fitted with the revised rear fascia panel it now wears, featuring a centrally-placed Bugatti logo.

The EB110 GT remained in the Czech Republic through 2012, at which point the car was exported to Italy and exhibited at the Auto e Moto d’Epoca concours d’elegance in Padua. Sold to a noted Italian collector, 068 enjoyed the company of numerous flagship supercars until the collection’s offering by RM Sotheby’s in late 2016.

After being presented at the London Concours d’Elegance in June 2017, the Bugatti was sold in 2018 to an enthusiast based in Denmark before more recently passing to the consignor, who soon submitted the car for servicing to B Engineering in Emilia-Romagna, the current rightsholder to EB110 production and official marque-endorsed maintenance; over $12,000 was invested in the maintenance of the Bugatti at this time. Documented with service invoices from Dauer and B Engineering, this mildly used Bugatti displays 31,930 kilometers (~19,840 miles) at cataloguing.

The beautifully presented EB110 GT should steal the heart of any supercar enthusiast or Bugatti collector. Ideal for presentation at concours d’elegance or enjoyment of its groundbreaking high-performance engineering and design envelope, it is sure to deliver visceral thrills at speed. It ably epitomizes the undeniable success of Romano Artioli’s short-lived dream, a muscular thoroughbred emitting the panache and style for which Le Pur Sang has become a thing of legend. 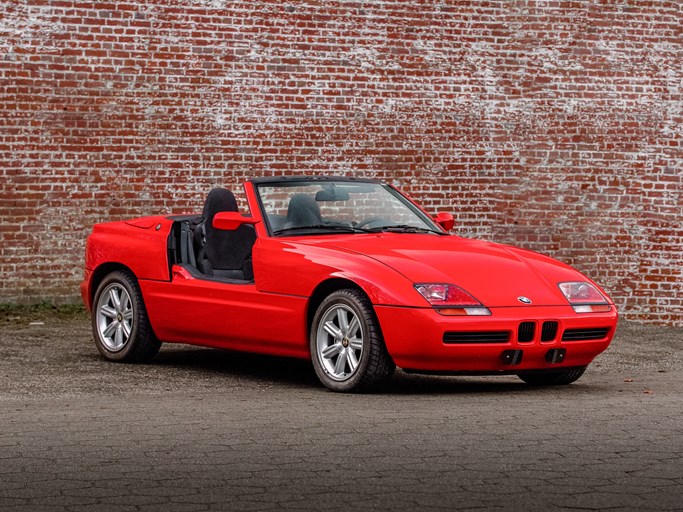