The original GT500 was created by legendary race car constructor Carroll Shelby in 1967 at the behest of Ford, who wanted to show that their restyled Mustang model was still a performance pony as sporting as it looked. But now, the Shelby-tuned Mustang needed a big-block. Ford supplied all the new structural components to Shelby, who mated them to a 1965 GT350 R mule chassis and dropped in a fresh 428-cubic-inch Police Interceptor V-8 engine. The result was, quite simply, a match made in heaven. 2,048 examples were produced solely for 1967, and it outsold Shelby’s contemporaneous, track-focused GT350 by nearly double.

Though not the first time that Ford and Shelby have collaborated on a successor to their famous GT500, the current sixth-generation example presented here is certainly the quickest and most powerful—and quite possibly the best-looking. Revealed by Ford in January 2018, this newest GT500 is powered by a 5.2-liter supercharged V-8 engine producing a conservatively rated 760 horsepower and 625 pound-feet of torque. In laymen’s terms, the GT500 is the third-most powerful production vehicle ever built in North America after Dodge’s SRT Hellcat Redeye and SRT Demon. Power is routed to the rear wheels via a stout Tremec seven-speed dual-clutch transmission. Extensive carbon fiber aerodynamics, six-piston Brembo brakes, a Torsen rear differential, and an adaptive Magneride suspension system keep the GT500 grounded under full acceleration. With many unique styling and performance elements throughout, this new Shelby model is a fitting successor to the original GT500 blueprint.

This 2021 GT500 offered here is a thoughtfully specified example finished in the striking shade of Grabber Yellow with optional High Gloss Ebony “over-the-top” stripe and matching side stripes. The interior features a sporty pair of Recaro seats wrapped in Ebony leather with Gray Alcantara inserts. Thanks to the fitment of the optional Carbon Fiber Track Pack and Technology Package, this GT500’s cockpit also benefits from a Bang & Olufsen premium sound system, Touchscreen navigation display, and Alcantara-wrapped steering wheel which fronts an exposed carbon fiber gauge cluster. The rear seat has similarly been deleted in favor of a solid shelf. The most impressive feature of the desirable Carbon Fiber Track Pack is a staggered set of exclusive 20-inch exposed carbon fiber wheels wrapped in Michelin Pilot Sport Cup 2 tires.

Presented today showing fewer than 24 miles on its odometer at time of cataloguing, this exquisite GT500 is accompanied by its original delivery accoutrements. Purchase of this lot includes registration for GT500 Track Attack performance driving experience hosted by Ford Performance Racing School at Charlotte Motor Speedway in Concord, North Carolina (travel and accommodations not included). 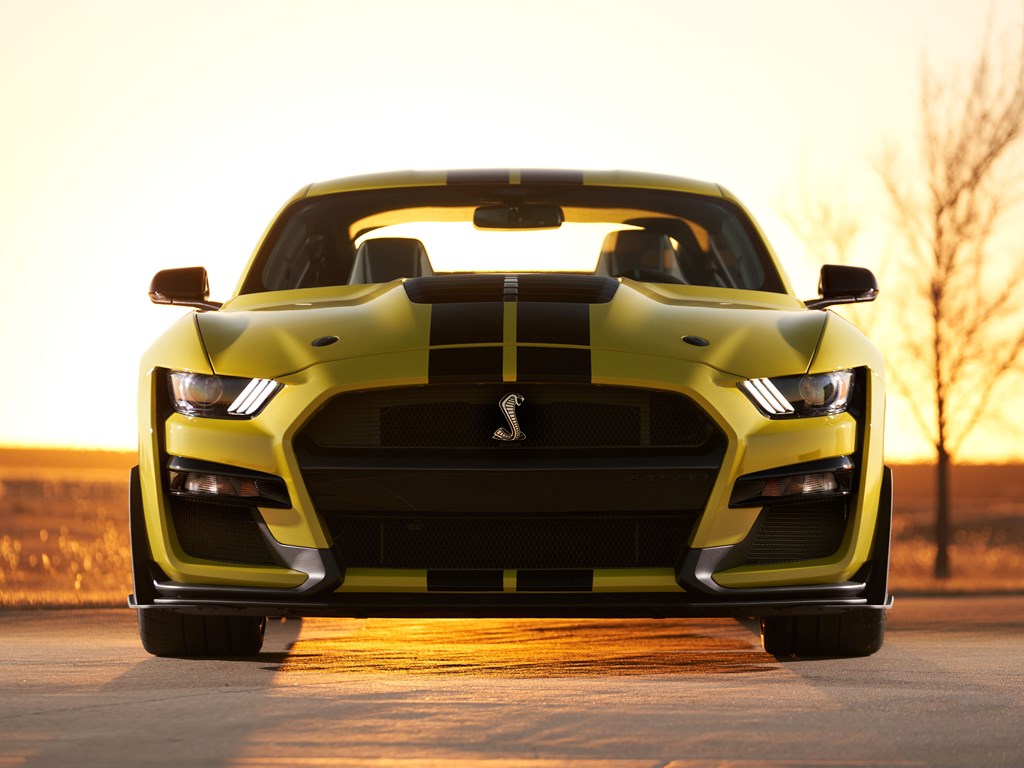