Details Additional Information
Chassis No.
14239
Engine No.
B 1034
Catalogue

A dramatic departure from the outgoing 275 GTB, Ferrari’s new 365 GTB/4 berlinetta took the world by storm at the 1968 Paris Salon, where it was first unveiled to the public. Angular and aggressive compared to the more voluptuous 275 GTB, the 365 GTB/4 stayed true to Ferrari’s formula of front-engined, V-12 grand tourers with amazing performance while many manufacturers were experimenting with mid-engine designs at the time.

With 352 bhp on tap, the 365 GTB/4 certainly did not disappoint. It could sprint to 60 mph from a standstill in 5.4 seconds, to an incredible top speed of 174 mph. This was a touch faster than Lamborghini’s Miura P400, making this new Ferrari the fastest production car in the world at the time. Considering its exceptional performance and in celebration of Ferrari’s historic 1-2-3 finish at the 24 Hours of Daytona in 1967, the 365 GTB/4 quickly earned the nickname “Daytona” by the press and automotive enthusiasts alike.

Built to U.S. specifications for the 1971 model year, this Daytona berlinetta, chassis no. 14239, was originally finished in the rare factory shade of Oro Chiaro (106-Y-19) over a Nero (VM 8500) leather interior and outfitted with factory air-conditioning and radio. The car’s first owner was J. “Sonny” Stinson of Detroit, Michigan. Stinson’s parents were funeral directors in the Detroit area, his mother being the first certified female African-American funeral director in the Great Lakes state. When Sonny took over and expanded the family business, it quickly became very successful under his tenure.

Stinson flew to Maranello and picked up his new Ferrari directly from the factory in August of 1971, where it was registered on Italian export plates EE 7261 for some continental exploration prior to shipping the car to Michigan, where it was subsequently registered. By October the Daytona was back in the U.S., where it appeared at a variety of FCA meets over the course of the next two years, including the 1972 and 1973 Ferrari Club of America Annual Meets.

Chassis 14239 was sold in 1976, and it moved across the country before coming into the ownership of Marty Yacoobian of Calabasas, California. Its next owner in 1978 was Raleigh Saddler of Los Angeles, who kept the car for four years. It was offered for sale by Saddler in the LA Times in July 1982, described as being finished in black over black and wearing Borrani wire wheels. Sold to Steve Cook that same year, the Daytona was subsequently sold to Lewis J. Stowe III of Plymouth Meeting, Pennsylvania. It remained with him until 1986 before passing to another owner in the greater Philadelphia area.

By the early 1990s, chassis no. 14239 had been restored in black and sold to Howard Cohen of San Francisco. The car passed through Erik Neilsen and two subsequent owners before being returned to its adopted home state of Michigan in 2002, where it resided under single ownership for the next fifteen years.

Still finished in black over black, 14239 retains its original engine, interior and correct-type gearbox. It presents wonderfully throughout as a superb, driver-quality example that is ready to be used and enjoyed as Ferrari intended. 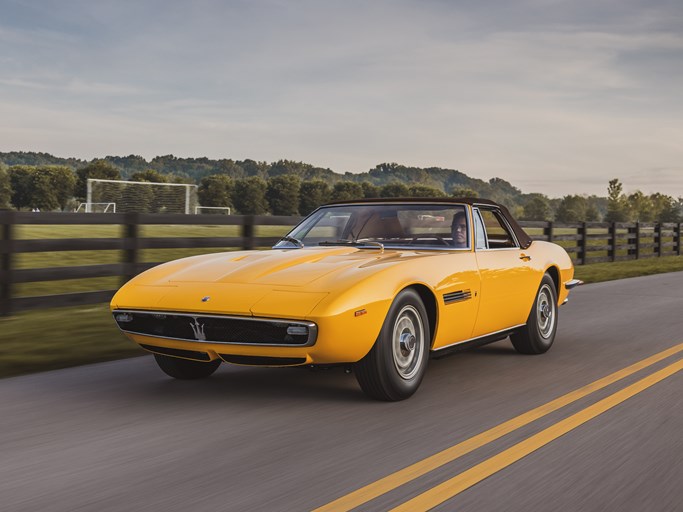