The 1967 Corvette was the final and most highly refined of the groundbreaking and revered second-generation Corvettes. This car, fitted from the factory with the legendary 427 “Big Block” engine, is among the most desirable “Mid-Year” C2 Corvettes ever produced. This breathtaking 1967 convertible, assembled at Chevrolet’s St. Louis plant and originally sold through Prout Chevrolet in Ohio, was carefully optioned to be a captivating and potent package.

As was the case with most American cars of this period, the Corvette buyer could choose from a host of factory options with the result that seldom are two cars identical in specification. The superb example offered here, finished in its original color of Rally Red, is equipped with a period-correct re-stamped block, the top-of-the line 427-cu. in. engine, topped by the impressive trio of Holley carburetors, which help in raising the performance to a staggering 435 hp. This Corvette is fitted with the desirable M21 close-ratio four-speed manual transmission and side pipe exhaust, some of the most desirable options for the model. Other optional equipment includes power brakes, power windows, tinted glass, F41 suspension, and a 4:11 Posi-Traction rear axle.

This Corvette was treated to an immaculate award-winning restoration, and upon close inspection, it quickly becomes apparent that the work was done in a very professional manner with excellent attention to detail, utilizing the correct materials and colors throughout. Some of the awards captured by this Corvette include two NCRS Regional Top Flight Awards in 1996, an NCRS Regional Performance Verification Award in 1997, an NCRS National Top Flight, a Duntov Award in 1998, and a Bloomington Gold certification.

Part of a major collection in recent years, this classic Corvette has been treated to the best of care and presents beautifully today. Combining blistering performance, aggressive good looks, and a show-winning authentic restoration, this 435-hp Sting Ray is ideally suited for continued exhibition, club events, and spirted driving on two-lane country roads. 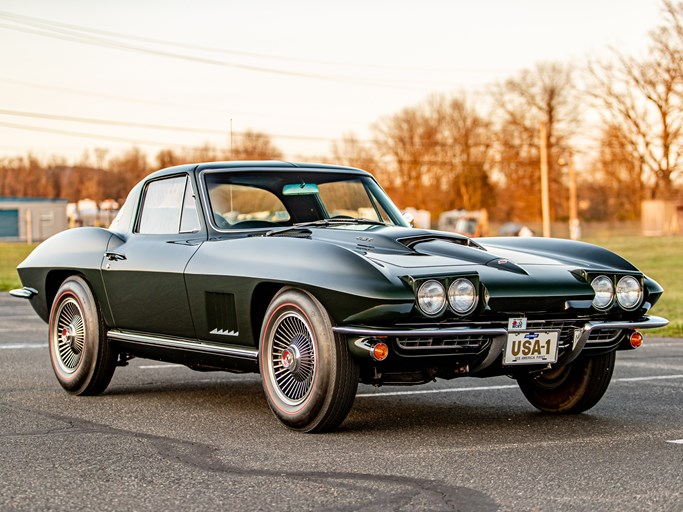