On 4 January 1930, New Yorkers were treated to an engineering tour de force. At the opening of the National Automobile Show at the Grand Central Palace, Cadillac unveiled the world’s first production V-16 automobile engine. The late historian Griffith Borgeson explained it elegantly: “It really made history and it made Cadillac, beyond all discussion, the absolute world leader in motoring magnificence . . . . It was the super engine that set the whole exercise apart.”

The creative genius behind this powerplant was Owen Nacker, an industry veteran who had worked on Howard Marmon’s long-simmering V-16 project. His first project for Cadillac was the LaSalle V-8 in 1927; shortly thereafter, he was working on Cadillac’s own V-16.

Nacker flouted a lot of Cadillac tradition. The new engine was designed with overhead valves, which the division had never used. Overhead valves were noisy, but Nacker adopted a new hydraulic lifter setup developed by GM engineering that effectively provided zero-lash operation. With overhead valves, the exhaust manifolds could now move to the outside, important because the narrow 45-degree vee left little room for manifold clutter.

The large aluminum crankcase held five main bearings, the crankshaft counterweighted and fitted with a vibration dampener. The timing chain also drove the generator. The two cylinder blocks had cast nickel-iron liners extending down into the crankcase. Heads were of cast iron. The central camshaft, with roller-type followers, actuated tubular pushrods, which in turn worked short rocker arms. With the new zero-lash hydraulic lifters it was all very silent.

The V-16 was, in effect, two engines in one, sharing a crankcase and crankshaft. Each block had a complete fuel system, including carburetor and vacuum tank, and its own exhaust. There was one distributor but two coils, which were recessed into the radiator’s header tank. The engine’s power pulses overlapped to produce smoothness, since they occurred every 45 degrees of rotation. Developed brake horsepower was initially 160; eventually it rose to 185, and torque it had aplenty: 300 foot-pounds at idle.

Aesthetically it was a work of art, said to be the first powerplant that was truly styled. Wood and clay models were made of the engine as development progressed, and studied for simplicity and appearance, as well as serviceability. All wiring and hoses were concealed to the extent possible, hidden behind covers or in raceways. Viewed from outside the engine compartment, there was no clutter whatsoever.

The engine, of course, was of little use without a body, and there were lots to choose from. There were 54 in the catalogue, roadster to town car, all from Fleetwood. Some were built in Fleetwood’s original facility in Pennsylvania, others from the new Detroit plant. Many of them did triple duty, available also as V-12 or V-8, for nine months later the sixteen had a twelve-cylinder brother, created by removing the end cylinders on each bank. The wheelbase was a whopping 148 in.; by 1934 it would grow to 154, the longest of any American car. A few chassis were bodied by outside coachbuilders, such as Murphy, but not many.

After the V-16 had made the circuit tour of U.S. shows, a trio of cars was sent abroad to Europe, where they were enthusiastically received. This was also true at home, and 2,887 found customers by the end of the year.

This 1930 Cadillac Sixteen Sport Phaeton was shipped on 9 July 1930 to the factory Philadelphia Branch. Before it could be sold, it was diverted on a Special Order to New York. The first owner is not recorded. By 1972, it was in the collection of Robert Chamberlain of Princess Ann, Maryland. Alan Merkel, historian of V-16 Cadillacs, viewed the car and reported on its fine original condition. In 1981, Chamberlain sold it to Philip Wichard of Happauge on New York’s Long Island.

Wichard, whose 1995 New York Times obituary recounted that he “developed his passion for cars as a 10-year-old junkyard scout who was allowed to steer junkers being towed for scrap,” was known as a shrewd and discriminating collector. He bought his first car at age 10, and soon turned a $5 profit. Once he began collecting and restoring in earnest, he seldom sold anything; indeed his collection was sold at auction only months before his passing.

Wichard had Stone Barn Automobile Restoration in New Jersey comprehensively restore this Cadillac Sixteen. Completed in 1990, it quickly won National First awards from both the Antique Automobile Club of America (AACA) and CCCA. Since that time it has passed through four subsequent owners, among them New Jersey collector Dave Kane. Prominent features include the factory dual side-mounts with metal covers, Pilot Ray driving lights, and the rare and correct “Lo-boy” trunk fitted to open cars. Accompanied by a copy of the 1930 build sheet, it is one of 18 survivors among the 85 Sport Phaetons, style no. 4260, originally sold and one of the finest extant. 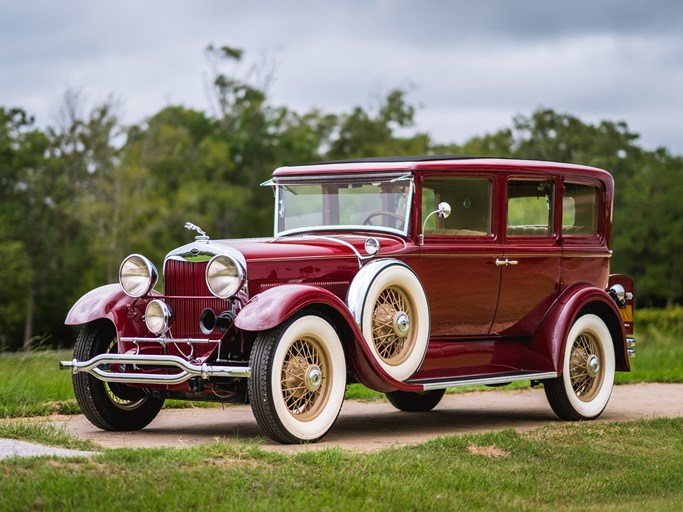