The spectacular Mercedes-Benz 300 SL Gullwing was in production for three years, during which just 1,400 cars – not including racers and prototypes – were built largely by hand in Stuttgart’s highest luxury car traditions. Despite the low volume, Daimler-Benz was sufficiently convinced of the value of an expensive sports car as part of its model lineup to develop an improved roadster version.

When Max Hoffman, the U.S. distributor for Mercedes-Benz, convinced Daimler-Benz in 1953 to put a customer version of the astounding and successful 300 SL race car into production, the distinctive gullwing doors and comfort of a closed cabin led the product planners to decide that the first version to be introduced would be the “Gullwing” coupe. The speed with which that first prototype was to make its way to the New York Armory show and into dealer showrooms meant that shortcuts had to be taken, so almost immediately after production began for the coupe, design work began on a roadster version with the goal of correcting the flaws of the coupe.

In particular, Hoffman believed that U.S. demand, especially on the West Coast, would be much stronger for a roadster that offered the pleasures of top-down motoring. Hoffman’s appraisal proved prescient; after good sales of just over Hoffman’s commitment of 1,000 units in 1955, the first full year of production, Gullwing sales dropped to only 311 in 1956, and production was terminated in mid-1957 with 1,400 units sold.

The most obvious area in need of improvement from the coupe was the tube frame that dictated high, wide sills under the doors, requiring drivers and passengers to execute an acrobatic entry and exit. Dealers would even have one of their female staff members provide instructions in private to ladies taking delivery to show them how to get in and out of the car in the most ladylike way possible. By adding diagonal struts to brace the lowered side sections and strengthening the many of the mainframe tubes, the engineers were able to maintain torsional rigidity in the roadster while lowering the center connections below the doors. Larger doors in a traditional shape were added to make access easier as well as to permit the use of roll-up windows, which also alleviated hot and stuffy conditions on warm days.

Due to the geometry of the rear end that had been adapted from the W186 chassis of the larger 300 sedans, the coupes also had a penchant for bump oversteer. To counter this problem, the roadster chassis used the single-pivot swing-axle rear suspension adapted from the 220a sedans, with a coil spring mounted transversely above the differential linked to the axles by vertical struts. If a rear wheel hit a bump while cornering, this additional spring would compress, stiffening that rear corner and mitigating oversteer. The changes to the frame and suspension also allowed the installation of softer coil springs, providing the roadsters with a more compliant and comfortable ride without affecting the sporty handling.

Performance was improved with several changes from the coupe. Engine compression was increased to take advantage of 100-octane gasoline becoming available, and the sports camshaft became standard, which increased horsepower by 25 to offset the 250 lbs. of additional weight of the roadster.

All in all, the roadsters sold well from introduction in 1957 to conclusion of production in 1963, with a total of 1,858 units sold.

The car offered here had previously been entered in the Copperstate 1000 in the early 2000s and again in 2008, without incident. It more recently received a professional, body-off, nut-and-bolt restoration, completed by Bruce Kelly of Minnesota’s Lake Country Classics in classic Silver over a red leather interior, with a contrasting black convertible top, N.O.S. Rudge-type knock-off wheels, and fitted Karl Baisch luggage, as well as proper books and tools. Adding his knowledge and detail to the project was 300 SL authority and SL Market Letter owner John Olson, who served as a consultant.

Both correct and very presentable, this lovely SL belies the age of its restoration and is perhaps the ideal candidate for touring, where it is eligible for countless events. 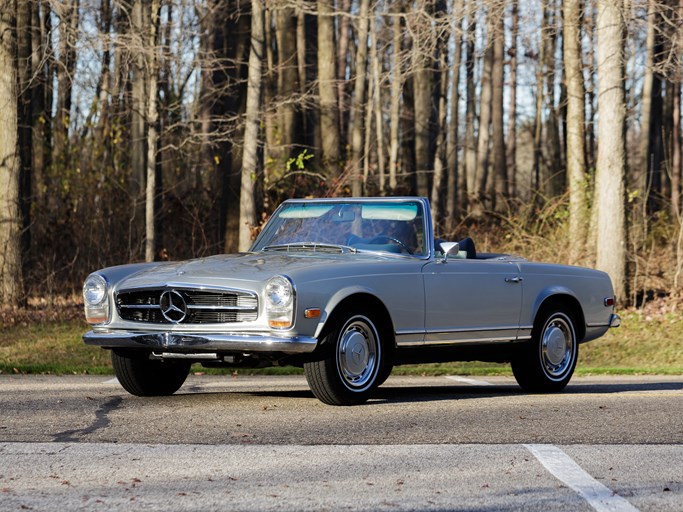 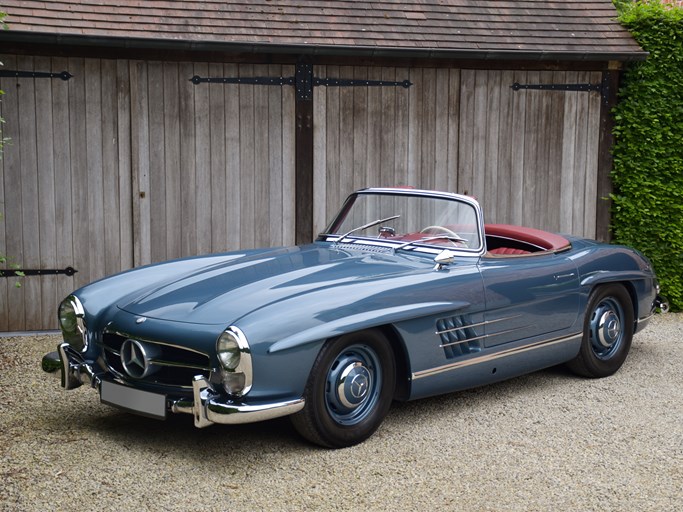