The history of automobile racing is filled with unusual characters whose talent and personality were equally outsized. In the American SCCA circuit of the early 1960s, few were more memorable than Donna Mae Mims. Dressed head, toe, and car in a shade of pink that would have made Mary Kay proud, Mims used her former role as Don Yenko’s public relations manager to sell herself with skill, bestowing upon herself such newsprint-friendly nicknames as “El Pinko,” “Her Serene Pinkness,” and “Donna Maezing.” The car herself, passing a horde of pursuing male competitors, had “THINK PINK” emblazoned on its tail, just to remind them who was at the wheel.

Make no mistake, Donna Maezing was a riot. However, she was also a genuinely skilled and talented driver, something that first became evident in this 1963 Austin-Healey Sprite, which she purchased from Bill Wissel of Pittsburgh, some three years after its sale as a new car in Paris, France. It had reportedly been exported to the U.S. by Dr. Jonas Salk, developer of the polio vaccine, and used as his daily driver at the University of Pittsburgh.

Mims had the car finished in the “Think Pink” livery and got to work behind the wheel. By the end of 1963, Her Pinkness had proved herself anything but serene on the track. She conquered the H/Production One-Liter class and became the SCCA’s first female champion.

With such success, Mims no longer required a used Sprite as her mount and took up a new MGB for the 1964 season. (She would eventually progress to cement her legend in Yenko Corvettes—still pink, of course.) The Championship-winning Sprite was sold to Ross Harris and subsequently in 1971 to John Francis, who continued racing the car, as is documented in the original SCCA logbook, which is still with the Sprite and on file. After some 25 years on the track, the Sprite finally entered its well-earned retirement in 1987.

In 2005, the car was purchased by Jeff Moore of Rogersville, Missouri, who began its restoration, stripping the car and finding traces of the pink paint. He proceeded to write Ms. Mims, beginning a fascinating correspondence that also enabled the car’s restoration to exactly its original racing form, based upon its famous driver’s memories, as featured in 2008 in Classic Motorsport magazine. These letters, on pink stationary no less, accompany the car today.

The car is equipped with flexible fiberglass bucket seats, helping to secure the driver and passenger in place, and appears as what it is—a racecar that has been restored to continue to compete. When acquired by the McCaw Collection, a different motor, gearbox, and rear end were installed to make the car more enjoyable to drive on the street, however, the competition-spec motor, close-ratio gearbox, and locked differential that were removed from the car are included should its next owner wish to return it to racing specification. Also included are a spare sway bar, driveshaft, and tonneau cover, as well as the aforementioned documentation and correspondence. 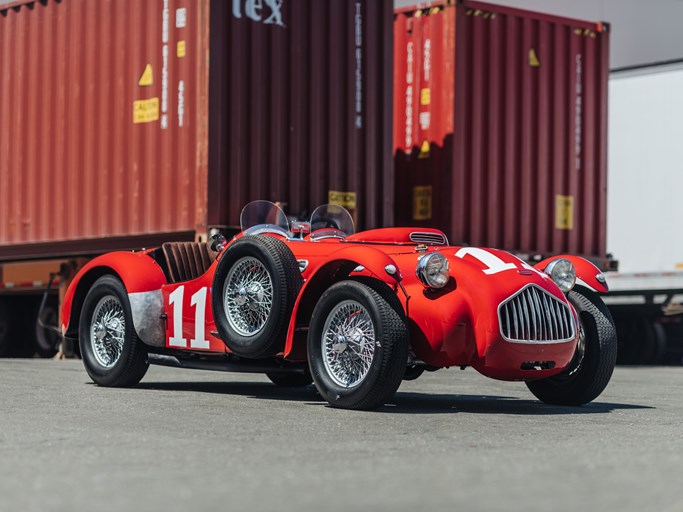