The so-called “Slant Nose” or Flachbau (flat-nose) option first appeared on Porsche Turbo coupes and cabriolets in 1984, several years after one of Porsche’s best customers, Mansour Ojjeh, asked the factory to create for him a street-legal replica of the company’s brilliant Type 935 racing car. Ojjeh was the president of Saudi-based Techniques Avant Garde and a major sponsor of Porsche’s TAG-McLaren Formula 1 program. A growing number of wealthy clients began asking for their own versions of these hand-built 935-look road cars. Soon Porsche realized that they could generate a tidy profit; the delivered price of a factory Flachbau was as much as 60 percent greater than a standard Type 930. Porsche eventually crafted 34 examples in 1984 and 52 more in 1986. In Europe, these cars were known as the Type 930 SE, while in the US, where they became available in early 1987, they were known as the 930 S.

This very attractive 911 Turbo Coupe is one of those factory conversions for the 1984 model year. Its Certificate of Authenticity notes that this was a German-market car delivered in Grand Prix White with a Gray-Beige leather interior. The factory alterations included new steel front fenders with louvers and retracting headlights, widened and boxed rocker panels, side vents with strakes on the rear quarter panels, a large whale-tail rear spoiler, and other items. This car’s first owner specified a broad array of options, including an electric sunroof; air conditioning; a 40-percent limited-slip differential; a pair of leather-wrapped sport seats; an electric passenger-side mirror; a black headliner; a heavy-duty, 88 ampere-hour battery; and Pirelli P7 high-performance tires. The car was also fitted from new with impact bumpers and manual two-piece safety belts for the rear seats.

Soon after completion, the car was exported to the United States. It arrived stateside on May 2, 1984, and was delivered to Scottsdale Porsche-Audi in Arizona with its odometer reading just 42 kilometers. Because it was a European model, it was sent to marque expert Alan Johnson Racing in southern California for conversion to meet California emissions standards. AJR installed a Lambda sensor, a catalytic converter, and an air pump. The car then received an EPA certification on July 11, 1984. Documents supplied with this car include California registration for 1988 and a later registration (2007) to Mr. Gus Williams of Oakland, California. The Porsche was subsequently acquired by the consignor.

According to the owner, this stunning Slant Nose Turbo has received a number of significant performance upgrades, including a five-speed gearbox as well as a larger turbocharger and a RUF intercooler that boosts its output to an estimated 341 horsepower. Its wide Fuchs forged alloy wheels are anodized with black-painted centers, making a striking contrast to the Grand Prix White paint. The full grey leather interior includes a stereo entertainment system. The car is supplied with its correct jack and collapsible spare tire, an air compressor, and a partial tool kit.

This is a stunning example of one of the most desirable modern Porsches. 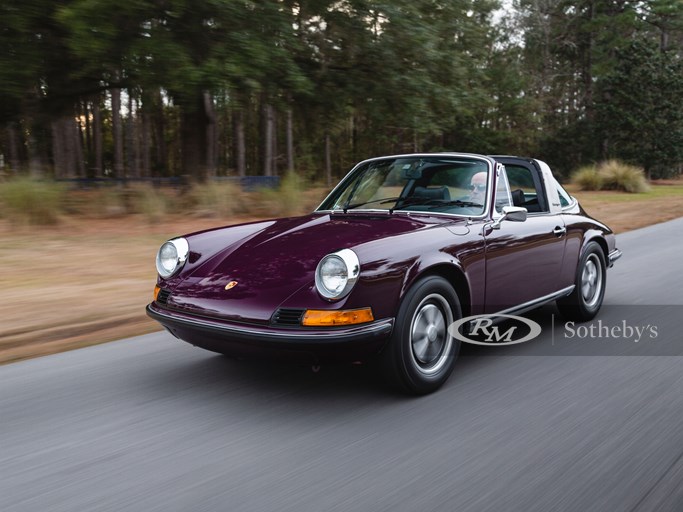