First introduced as one of the GM Motorama Dream Cars, the Corvette was thought of by skeptics as merely a publicity model. The car was quickly rushed into production by June 1953 with a body built of fiberglass. Each car was essentially hand-built, but all were Polo White with red interiors and equipped with an anemic 150-horsepower “Blue Flame” six-cylinder engine and two-speed Powerglide automatic transmission. The rest, as they say, is history, as GM shocked the automotive world with the introduction of an all-new model in 1963.

Penned by GM stylist Larry Shinoda under the guise of Bill Mitchell, the ’63 Sting Ray introduced all-new wind tunnel–influenced aerodynamic styling and superb engineering, immediately elevating the status of the car. Underneath that gorgeous body was a serious car mechanically, and it was the first use of the Sting Ray name to describe the car. The fiberglass car rode on a four-inch shorter wheelbase than previous models, but overall length remained nearly the same. For ’63, the Sting Ray featured aggressive yet handsome hidden headlights. A new ladder-type frame replaced the X-type frame, which lowered the center of gravity while also improving handling.

A coupe was available for the first time, offering a body structure 90 percent stiffer than the previous year’s roadster. Known for its distinctive split rear window, unique only to 1963, this was the first Corvette with an independent rear suspension and wind tunnel–designed aerodynamics. Zora Arkus-Duntov, known as the father of the Corvette, was quoted as having said of the 1963 Corvette, “For the first time I now have a Corvette I can be proud to drive in Europe.”

Resplendent in Sebring Silver over a Black interior, this Corvette is also equipped with the Powerglide automatic transmission that makes for effortless cruising. In addition, it features the highly desirable knock-off aluminum wheels and rare factory air conditioning. Power is supplied by the 327/300 V-8, and with power steering, power brakes, and an AM/FM radio, it adds up to one lavishly equipped Corvette circa 1963.

Body and panel fit are quite nice, as is the chrome and exterior trim. Most recently, the electrical system has been gone over to insure seamless operation, and copies of the receipts are included for review.

Equipped with amenities and options unusual for 1963, this 'Vette makes the perfect high-quality driver, ideal for touring and driving events. 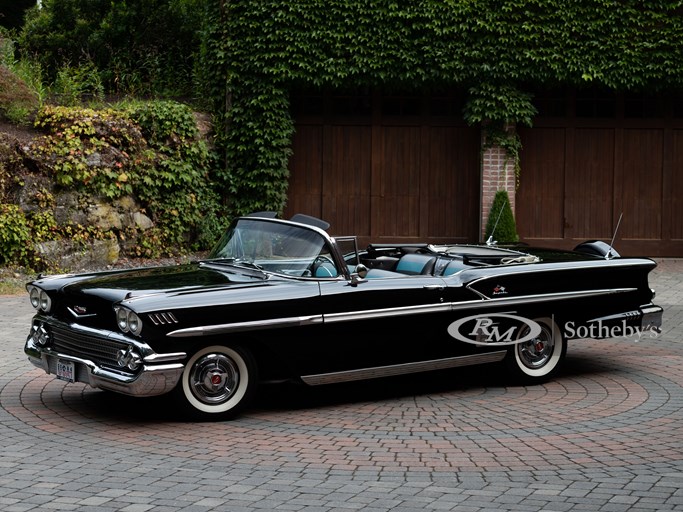