Judged by any set of parameters—and viewed from any angle—the Tatra T77 is one of the most fascinating cars of the pre-war era. Designed primarily by Austrian Hans Ledwinka and German Erich Übelacker, with input from Zeppelin designer and aerodynamicist Paul Jaray, the T77 was hand-built in limited numbers by Tatra of Czechoslovakia from 1934 through 1936.

The car’s futuristic, low-to-the-ground appearance was dictated by then-radical streamlining principles, with its designers seeking to maximize efficiency and high-speed performance by reducing drag. Even the bold rear fin was more than decoration; it was intended to increase lateral stability under the high speeds at which the Tatra was capable of traveling.

The effort paid dividends: The T77 was capable of over 90 mph despite its relatively small V-8—itself an interesting rear-mounted, air-cooled overhead-valve powerplant displacing just under 3.0 liters. In fact, a 1:5 scale model of the T77 was tested in a wind tunnel in period, and it was found to have a drag coefficient of just 0.245.

A car as revolutionary as the Tatra T77, as well as earlier Tatra protypes including the V570, did not go unnoticed by automotive engineers of the era…including a certain Ferdinand Porsche. Precisely how much Porsche “borrowed” from Tatra when designing the car that would become the Volkswagen Beetle remains a matter of controversy, but as Porsche later admitted, “sometimes Ledwinka looked over my shoulder and sometimes I looked over his.”

Unlike the German People’s Car it helped inspire, the T77 was a luxurious automobile hand-built in comparatively tiny numbers. Only 106 examples of the Tatra T77 (including pre-production chassis) were completed before the arrival of the updated T77A in 1936. Approximately 250 T77s and T77As were built prior to the launch of the Tatra T87; consequently, these early Tatras are exceedingly rare and highly sought-after, with a mere five restored, drivable T77s known to survive worldwide.

One of those scarce survivors is this beautiful T77, the ninth production chassis completed. Research indicates that it was purchased by Count Jaromír Egon Czernin-Morzin and used in a tour of the Italian Alps in 1935; the Count would own the car until 1936. As is typical for automobiles domiciled in Czechoslovakia, a country that suffered the privations of World War II followed by integration into the Soviet Bloc, much of this T77’s subsequent history remains unclear; however, it is believed to have been driven until the mid-1970s, after which it was apparently parked in a barn in Slovakia.

The Tatra was eventually acquired by a German enthusiast in 2005 and was exhibited at the Essen Classic Motor Show the following year. After its purchase by the consignor in 2007, it was shipped to the United States; in 2012, its no-expense-spared restoration began with the goal of returning the rare car to its former glory.

Photographs on file taken both prior to and during the car’s concours-quality restoration (fully documented at a purpose-made website, Million-Dollar-Tatra.com) illustrate the great care that went into every aspect of the job. Though the car’s sheet metal was in largely complete and corrosion-free condition, much of the underlying wood framing was found to be decayed; after the bodywork and surviving woodwork were 3D scanned, a French artisan was enlisted to replicate the deteriorated ash wood pieces, saving much of the original framework as possible. During the restoration, the Tatra’s large sunroof (a factory option, though one known to cause fitment issues) was replaced with a solid roof, as was available in-period, and new front and rear bumpers were fabricated.

The interior was refinished in period-correct gray leather, providing a beautiful complement to the dark blue exterior; great pains were taken to match the patterns of the original upholstery. Ivory-colored instrumentation is set into a dashboard trimmed in walnut veneer, a rich finish suitable for a luxury car such as this.

Alongside its scrupulous cosmetic restoration, the T77 benefitted from a total mechanical overhaul. Its air-cooled V-8 was rebuilt (with pistons, connecting rods, and valves replaced) and a new-old-stock carburetor was sourced from the Czech Republic. The car’s transaxle, as well as ancillary components including starting, braking systems, and electrical systems, were also refurbished at this time. Front suspension components were replicated where the original units were found to be beyond salvage, and its steel box frame was carefully repaired.

Even the smallest details—including a missing carburetor damper—were researched and replicated as needed with the help of the Tatra community. Further, the car’s trafficator turn signals, which had previously been removed, were restored, and three new wheels were fabricated to match the style and specification of the two correct original wheels that came with the car.

The decade-long restoration of this special car involved a team of experts both within the United States and abroad and was undertaken without regard for cost—only the quality and accuracy of the work performed. Remarkably, by the time International Auto Restoration of Oak Lawn, Illinois completed the decade-long resurrection of this car, over $1 million had been invested in the project. The result is surely one the finest T77s, and indeed one of the most exquisite early Tatras of any variety, in existence.

Exceptionally rare and breathtakingly restored, this 1934 Tatra T77 offers its next owner great potential for exhibition and touring worldwide, and it would make for a magnificent addition to any collection of historically significant automobiles. 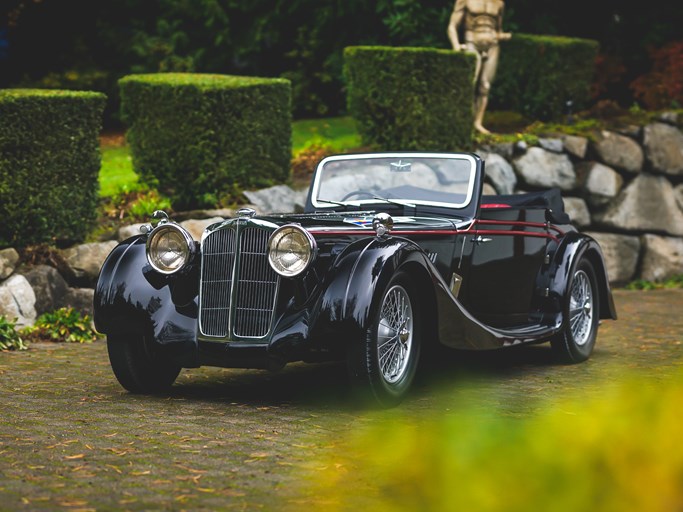