Son of a wealthy Cincinnati financier and heir to the Swift meatpacking fortune, Briggs Cunningham began his career in yacht racing at Yale in the 1920s, which eventually led to international fame when he captained the Columbia to victory in the 1958 America’s Cup. He engaged in international racing in the 1930s with his college friends Miles and Samuel Collier, who founded the Automobile Racing Club of America (later renamed the Sports Car Club of America, SCCA, in 1944).

In 1950, Cunningham entered two Cadillac Coupe DeVilles in the world’s most prestigious race, the 24-hour endurance event at Le Mans. One remained nearly stock, but the other was heavily and unconventionally modified, earning it the nickname “Le Monstre.” They finished 10th and 11th among a sea of Jaguars, Aston Martins, and Ferraris. This early loss only increased Cunningham’s will to victory, which ultimately culminated in the creation of his eponymous Cunningham C-3 automobile. At the time, homologation rules of Le Mans specified that competitors could campaign production vehicles. However, at least 25 examples needed to be built to be eligible to race. This would have been a problem for most, but for Briggs Cunningham, the solution was clear: He must build his own brand of car. Thus, the Cunningham C-3 was born.

Cunningham developed the Cunningham C-3 by mating the newly popular Chrysler Hemi V-8 engine with a racecar chassis and Italian bodywork designed by Vignale of Turin, Italy. With exclusivity and a high price point, ranging between $8,000 and $12,000 new, wealthy Americans such as the Du Pont family and the Rockefeller family took notice and were early customers. By 1954, Briggs Cunningham was featured on the cover of Time magazine with three of his Cunningham racing cars, as the embodiment of “Horsepower, Endurance, Sportsmanship.”

This Cunningham C-3 was shipped to Vignale on 3 February 1953, returning to New York a month later. Completed in 1953 and finished in red, it spent the summer of 1954 on display at Alfred Momo’s in New York. In August, racer and rare book collector Irving Robbins of Northern California purchased the car, giving up his race-damaged Cunningham C-2 on trade. Mr. Robbins would ship the car to California and it would be shown in 1956 and 1957 at the then-fledgling Pebble Beach Concours d’Elegance. In 1957 the car was featured in Road & Track and in the Encyclopedia of American Cars.

The car would subsequently change hands several times, with ownership from 1966 onward known as it was cherished by a succession of caretakers. Over the years it has resided in three well-respected private collections, one of whom commissioned its restoration. It was later sold to Briggs Cunningham’s daughter, Lucie, who purchased the car to enjoy with her mother. It was under Lucie’s ownership that it was shown at the 2013 Greenwich Concours d’Elegance.

Today chassis 5441 is offered from a well-respected private collection. The car’s Vignale body is beautifully finished in a subtle red two-tone with a tan convertible top. It rides on American Classic tires mounted on chrome wire wheels. The interior is trimmed in tan leather, and it is luxuriously appointed for an American car of the period, featuring a wood-rimmed steering wheel, radio, heater, and a full suite of instrumentation housed in a leather-wrapped dash.

Built by American legend Briggs Cunningham, this beautiful C-3 Cabriolet would make a wonderful addition to any sports car collection. Being one of just five ever built, it is sure to draw attention wherever driven or shown. 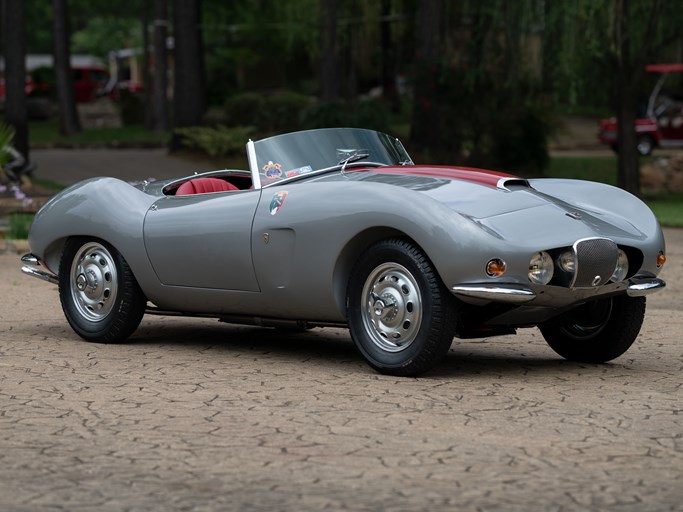