Marketed by Ferrari at the time as the world’s fastest convertible car, the Superamerica’s blend of stunning speed, elegant design, and specially designed, retractable hardtop makes it one of the finest convertible coupes ever offered by Ferrari. Most notable is the patented Revocromico hardtop. Utilizing carbon fiber and special electrochromic glass, the Superamerica’s rotating roof transforms into a convertible at the flick of a switch. In coupe form with the roof in place, the transparency can also be adjusted between its lightest clear and darkest opaque settings.

Based on the drivetrain of the 575M Maranello, the Superamerica boasted a higher-output version of Ferrari’s then flagship 5.7-liter V-12 by modifying the flow rate of the intake tracts and relieving back pressure in the exhaust system. The updated engine produced 532 hp at 7,250 rpm, while torque remained an impressive 434 pound-feet at 5,250 rpm. Upon opening the hood, the car shows off its large Rosso Corsa–colored intake covers adorned by the famed prancing horse on top of its ever-so-imposing V-12.

The Superamerica showed 15,005 miles at time of cataloguing. Red brake calipers neatly hide behind the three-piece modular wheels. The chosen Daytona-style “chairs” are reminiscent of those found in the original 365 GTB/4 Daytona, a sign of true Ferrari connoisseurship. Furthermore, and for a touch of modernity, carbon trim is featured on console, surrounding the radio and roof switches. A Rosso-faced tachometer sets itself apart from the rest of the instrumentation, guaranteed to draw the driver’s attention.

In December of 2020 the Ferrari received a timing belt service and had the sticky buttons refinished. In March of 2021 a new battery was installed, and four new tires were mounted and balanced. The Superamerica is accompanied by a window sticker copy, as well as copies of the service work from December 2020 and March 2021. 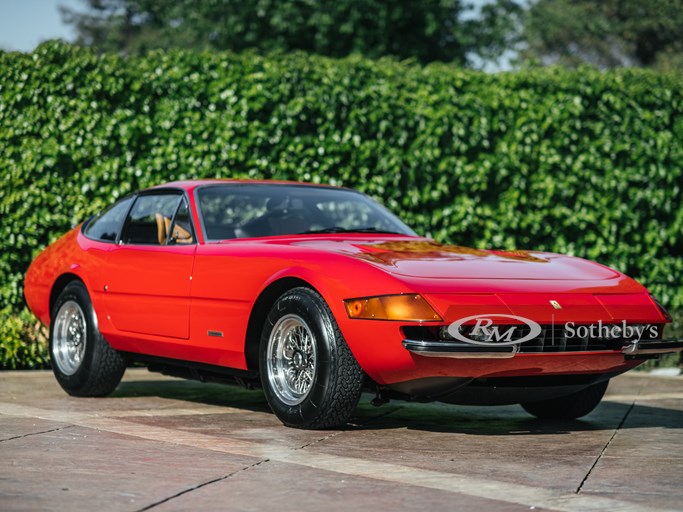