Introduced in 1968, the Ferrari 365 GTB/4—unofficially known as “Daytona” in tribute to the American racetrack and its 24-hour endurance race, in which Ferrari achieved a storied 1-2-3 finish in 1967—instantly reinvigorated Maranello’s grand tourer lineup. Power came from a front-mounted 4.4-liter Colombo V-12 mated to a five-speed manual transmission, but this long-proven configuration was enhanced by sleek, modern bodywork penned by Leonardo Fioravanti at Pininfarina.

The Daytona made good on its nickname with stunning performance specifications: Its V-12, producing 352 horsepower, ensured 5.4-second sprints from 0-60 mph and a 174-mph top speed. Four-wheel independent suspension, all-wheel disc brakes, and 50/50 weight distribution made for excellent handling. Yet this did not come at the cost of comfort, thanks to a tastefully appointed, leather-swathed two-seat cabin. The Daytona’s blend of power, luxury, and style proved intoxicating, and 1,284 GTB/4 Daytona coupes were ultimately produced (as well as 122 Spiders) before production ceased in 1973.

A U.S.-market car, chassis 16553 was completed on 13 June 1973. This final-year example initially sported Rosso Rubino exterior paint accented by a silver-painted nose panel, a feature that helped later, pop-up headlight-equipped 365 GTB/4s such as this emulate the look of earlier cars, which featured Perspex-covered headlamps. Its interior was trimmed in Beige leather. Factory features found on this chassis include air conditioning, power windows, and a Becker radio, items that emphasized the model’s balance of both speed and comfort.

In September 1994, chassis 16553 was delivered to its first private owner, Dr. Warren H. Fox of Villa Park, California, via Bill Harrah’s Modern Classic Motors of Reno, Nevada. Dr. Fox would keep the car until 1984; it would then pass through a series of California-based owners over the next five years, having reportedly been restored during Dr. Fox’s tenure but apparently remaining in its factory colors and original configuration.

Circa 1990, the car was relocated to Europe, and it was recorded as being offered for sale via Investment Cars L.A. in the December 1991 Ferrari Market Letter. In 1993, it was purchased by Charles Zwolsman of the Netherlands. Zwolsman was an entrepreneur, collector, racing driver, and the founder of the Euro Racing motorsports team; he was also a drug smuggler, a fact that would lead to the 1993 seizure, and 2001 auction, of his car collection—including chassis 16553—at the behest of the Dutch government.

Following its sale, the Daytona crossed the Atlantic once more, entering the collection of Robert Wright of Evansville, Illinois in December 2001. Under his ownership, the car was repainted in Rosso Chiaro. In May 2005, the car was acquired by Randy Gori of Edwardsville, Illinois, a successful attorney and enthusiastic Ferrari collector. Service invoices from his ownership, many originating from Continental Auto Sports of Hinsdale, Illinois, attest to the care Mr. Gori lavished upon the car and his dedication to maintaining it in optimal mechanical condition. It was painted its present shade of red under his tenure. Mr. Gori would retain the car until his death in early 2020.

Further notable work, completed by Issimi Meccanica of San Carlos, California in April 2021, included a radiator re-core, an air conditioning system overhaul, replacement of gaskets and seals to address front timing cover, cam cover, and shift shaft leaks, a new battery, and the replacement of coolant, vacuum, and brake hoses. At this time, the Daytona’s carburetors were also adjusted and tuned.

Presented in restored and carefully maintained condition, chassis 16553 is accompanied by a Massini Report documenting its entire history, as a correct spare Borrani wheel, tool roll, and service invoices spanning 2003 to 2021. Blending muscular yet refined looks with impressive performance, the 365 GTB/4 instantly redefined the Ferrari grand tourer upon its introduction; as examples such as this demonstrate, the Daytona is no less appealing today. 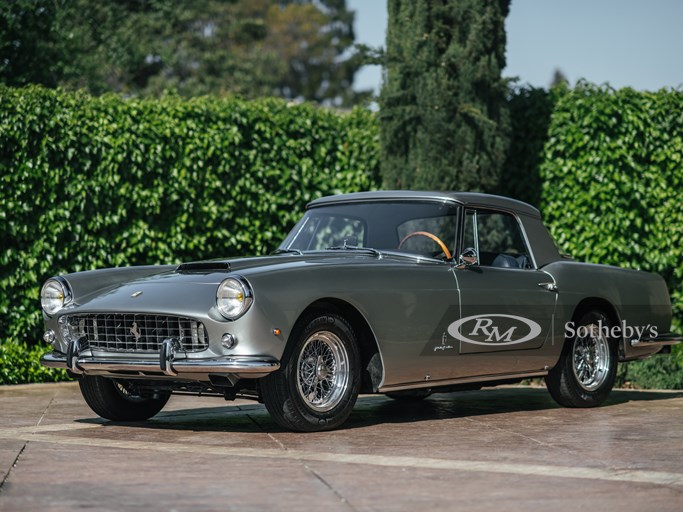