The 365 GTB/4 was introduced at the 1968 Paris Salon as the replacement to the legendary 275 GTB/4. It featured dramatic new lines penned by Leonardi Fioravanti at Pininfarina, and it quickly picked up the nickname Daytona from Ferrari’s dramatic 1-2-3 sweep of the 24 Hours of Daytona in 1967. While it looked remarkably different from the outgoing 275, the design was nothing short of groundbreaking, and it would set the tone for Ferrari styling for years to come. At that time, Lamborghini had already introduced the mid-engined Miura to great acclaim, and many believed that all high-performance supercars of the future would be mid-engined. With the introduction of the Daytona, Ferrari stuck to what made them famous, asserting that the front-engine/rear-drive layout could still produce cutting-edge performance.

Lurking under the car’s hood was an all-new 4.4-liter V-12 engine that gave the Daytona more than enough performance to back up its breathtaking looks. The engine was topped with six Weber carburetors, allowing for the Daytona to produce 352 horsepower with 315 foot-pounds of torque at 7,500 rpm. Its performance was incredible, as it could rocket to a top speed of 174 mph after passing 60 mph in just 5.4 seconds. That top speed was 3 mph faster than the Miura P400, making it the world’s fastest production car at its unveiling.

When new, the Daytona was praised by both customers and the motoring press alike, and perhaps one of the most well-known quotes about the Daytona’s performance came from noted racing driver and later automotive journalist Paul Frère. After reportedly taking the Daytona to 176 mph on the Italian autostrada in 1969, he commented that the radio was useless past 120 mph. He further noted that “if you go faster, it’s the engine that makes the music, the finest music of all to the ears of the enthusiast, and the music he can enjoy in a well-sprung car, fitted with such amenities as electric window lifters, air-conditioning…and a really capacious luggage locker—a grand touring car par excellence.”

The Daytona remained in production through 1973, and 1,284 examples were produced in total, making it one of the most successful models the company had ever produced. Sadly, this would be the traditional Ferrari grand tourer for quite some time, as it was replaced by the 365 GT4 BB, which bore a mid-mounted, flat 12-cylinder engine.

According to Ferrari historian Marcel Massini, chassis 16109 was completed by the factory on 12 July 1972. Notably, Massini reports that this car was a factory prototype for the 1973 North American version, hence its early production date in 1972. Following its completion, the Daytona was delivered to official Ferrari dealer Yonge Steeles Motors in Thornhill, Ontario, Canada, in September 1972. The car was tastefully finished in Giallo Fly over Nero leather and featured the desirable optional extras such as air-conditioning and power windows.

In 1993, the Daytona was acquired by Michael Butler who proceeded to have the car fully restored by Maranello Motors (now Ferrari of Ontario) in Toronto. In 1998 the car was awarded a Platinum Award at the Ferrari Club of America Concours, no small feat considering the high standards of what is undoubtedly the world’s most collectable marque. Butler later sold the car to Steven Butler of Chicago in July 2000. Following a pleasurable stint with Butler until 2016, the Daytona was offered for sale and then acquired by the current consignor. At this time the car’s mileage was recorded at just over 48,000 miles, 8,000 of which were accrued since restoration.

Sporting its original factory colors, chassis 16109 presents the wonderful opportunity to acquire the last true Ferrari model built before the Fiat merger and would be an excellent example to drive and enjoy as intended. 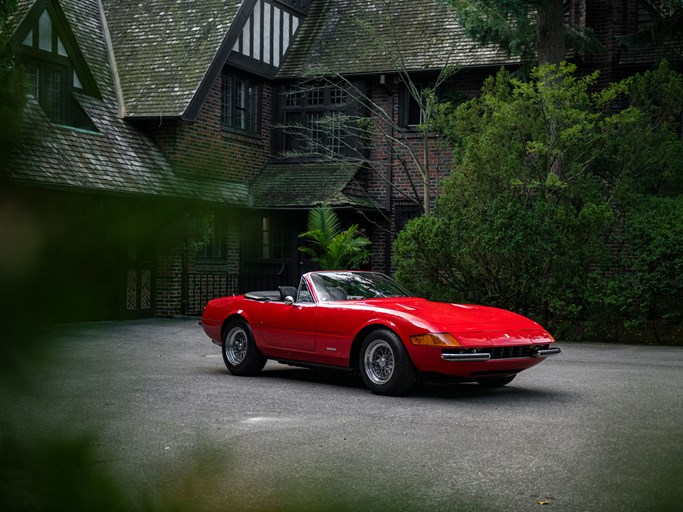