The third generation of Mercedes-Benz’s highly praised SL, the R107 was introduced in 1971 and remained in production until 1989. With a variety of powertrain options available, the largest engine was that of the 560 SL, a 5.6-liter V-8 which produced 227 bhp. Examples built from 1986 onwards remain the most desirable, as they featured several updates including four-piston brakes with larger brake discs.

According to the accompanying CARFAX report, this 560 SL was first sold in Illinois in 1986 and remained there for the majority of its life. It was under the care of one careful owner, Jack Nagy of Darien, Illinois, as noted on a copy of the original invoice which accompanies the sale. Delivered new as it appears today, in Black with a Beige interior, Nagy appears to have owned the car until 2015 when it was purchased by Harold Bond of Wheaton. Its current owner, believed to be the third, bought the car from Bond, having only been driven 9,298 miles, and subsequently imported the 560 SL to Switzerland.

Since, the car has been driven less than 100 miles and remains in brilliant condition throughout. In addition to the original invoice, a number of service invoices are included in the car’s history file, confirming its mileage as original.

Still popular today, much like its predecessors, the R107 Mercedes-Benz SL will never go out of style. Low-mileage examples have become increasingly difficult to find, and this example is without doubt one of the most pristine available. 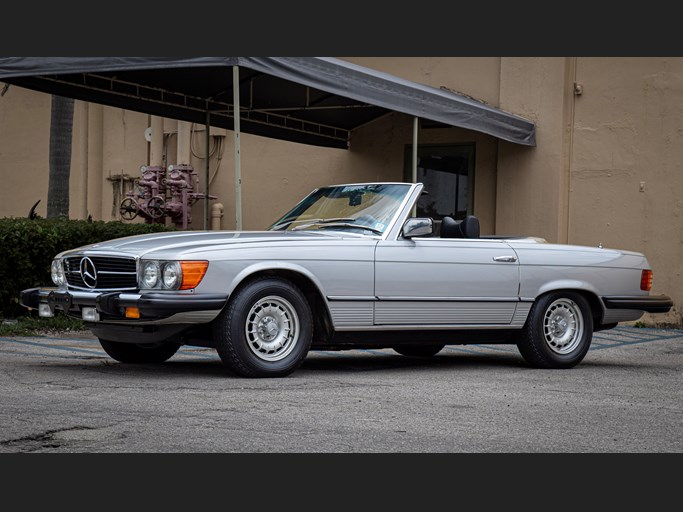