As the spiritual, if not mechanical, successor to the 190 SL, the Mercedes-Benz 280 SL has a clear connection back to the legendary 300 SL roadster. Like its predecessors, the 280 SL borrowed many components from a production sedan which gave it strength, stiffness, and perhaps most importanly, a large six-cylinder engine. From its introduction at the Geneva Motor Show in 1963, it was clear that the W113 platform, with sports car performance wrapped in luxurious appointments, was going to be a hit.

The W113 chassis went through several developmental phases, including examples wearing 230 SL and 250 SL nameplates before arriving at the 280 SL designation. With an ample 180 hp from the 2,778-cc inline-six, four-wheel disc brakes, and a well-engineered independent front suspension, the 280 SL was a superb performer for its day. Impressively appointed and beautifully styled, the 280 SL was the definition of luxury sports car throughout the four-year production run of this, the W113's most popular iteration. Just 23,885 examples were built between 1967 and 1971, and they remain highly coveted to this day.

This example was recently restored by marque experts and is presented in immaculate condition. It wears the rare Beige Grey livery over Parchment M-B Tex interior and is offered with the matching Beige Grey 'Pagoda' hardtop and a brown convertible top. Recent work included re-trimming the interior with correct materials, as well as restoring the wood to exceptional condition. The chrome has been redone to an immaculate shine, while the undercarriage and engine bay have been detailed to concours standards. Considered by many enthusiasts to be among the finest driving collector cars of the era, this example is an ideal choice for touring, showing, or simply cruising. The Mercedes-Benz 280 SL has long been a favorite of those who appreciate the finer things, and this is a perfect opportunity to find out why. 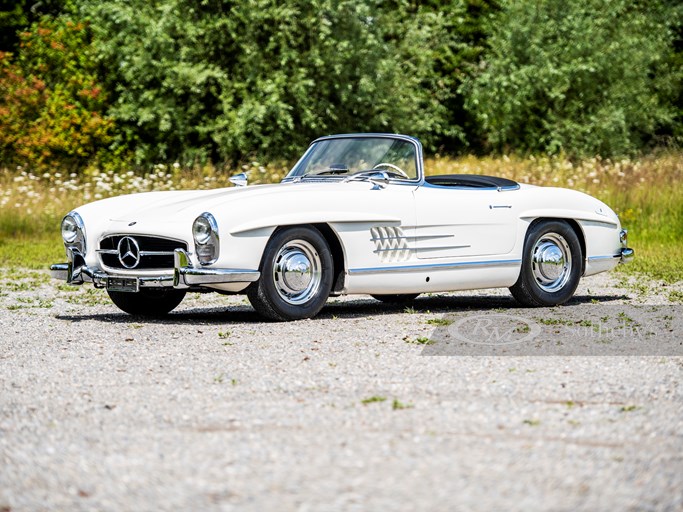