The successor of the Lancia’s lauded Aurelia came to the market in 1957 with the Flaminia, its chassis designed by the brilliant Antonio Fessia. It continued with the earlier car’s basic architecture, a 90 degree V-6 engine mated to a rear transaxle. While the final Aurelia and the first Flaminia engines were both 2.5-liters, they were not the same, as they had completely different cylinder bore and stroke specifications.

In addition to the Pinin Farina-designed, factory-built sedan, or Berlina, Lancia also offered a range of coachbuilt variants. Pinin Farina built a four-seat coupe, Carrozzeria Touring a two-seat convertible, as well as a two-seat and 2+2 coupe called the GT and GTL, and Zagato built the Sport, another two-seat coupe. Shown in 1958, with deliveries beginning in 1959, the Sport was created on a shortened wheelbase and combined a light weight body with the most powerful engines available in the Flaminia range, which gave it the most brilliant performance of any of the Flaminia models.

Over the course of a production life of nine years, there were four series, with five versions built. Initially, the Sport had a 2.5-liter single-carburetor engine, smooth, rounded front and rear ends, and covered headlights. After a year, the front end was revised with standing, exposed headlights. In three years, 205 examples were sold. The year 1962 saw the introduction of a three-carburetor version, which boosted power from 119–140 horsepower. Aptly named the “3C,” 174 were built before the engine was enlarged in 1963 to 2.8-liters, bringing approximately another 6-10 horsepower. Only 33 of the Sport 3C 2.8 were made before the final, and arguably the most desirable, variant appeared in 1964. The grandly named Flaminia Super Sport 3C 2.8 brought larger Weber 40 DCN 12 carburetors, an output of 152 horsepower, and a restyled body with recessed headlights and a more sharply defined, yet still smooth, Kamm tail.

The Super Sport was produced in 187 examples from 1964 to 1967, and the combination of the revised styling and most powerful engine make this the model of choice for many. Carrozzeria Zagato has been known practically since its founding for designing cars that are either stunningly beautiful, such as the pre-war Alfa Romeo 1750 roadsters, or quirky and challenging to love, such as the early post-war Panoramica cars. Clearly, this Lancia is one of the loveliest faces to come from the renowned Milanese coachworks.

The Super Sport on offer here is finished in its correct color of Newmarket Grey with a red leather interior, a classic color combination. Said to have spent some time in its early life in California, it remained there until the 1970s, when it came into the hands of an experienced collector who cherished the Flaminia for almost 31 years. Kept in a fully climate-controlled environment, it was driven regularly and scrupulously maintained mechanically and cosmetically by his staff, who also cared for the collection’s Alfa Romeos, Ferraris, and Talbot-Lagos.

In 2008, this well-cared-for original car was treated to a complete restoration, with both body and mechanicals redone in his shop. When finished in 2009, it made a rare public appearance at the 30th Anniversary Meadow Brook Concours d’Elegance, where it was much admired. Looking down the smooth flanks of the alloy body, the light reflects evenly from panel to panel, evidence of the quality of the body and the evenness of the shut lines. The bright trim and both the chromed and polished aluminum appears even and well fitted. The interior shows hardly any traces of use, with well fitted seat and door upholstery, dashboard instruments, and carpeting. Under the hood, the quality and correctness of the restoration continue, with proper finishes, clamp hoses, and clips clearly visible.

These very beautiful and capable automobiles have recently been discovered in a major way by knowledgeable and sophisticated collectors, with values rising commensurately. The combination of sure, fast, agile performance, a small quantity artisan build, and timeless beauty have made the Lancia Flaminia Super Sport one of the most sought-after Lancias of all time. This fine example deserves a very close look by anyone interested in experiencing the unique pleasures of Lancia ownership. 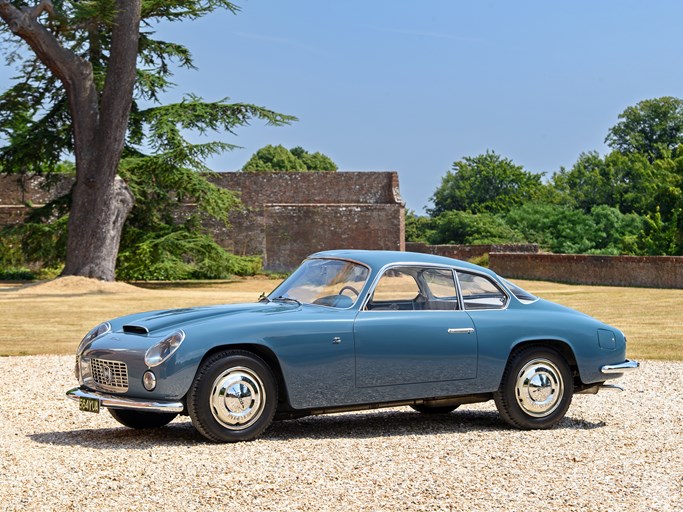