Please note this car is actually the last Mercedes-Benz 300SL Roadster to have an iron block. Also, note the Italian translation of the catalog description incorrectly states that this is the very last such car built before the changeover to aluminum, when it is in fact one of the last.

Racing languished at Mercedes-Benz after World War II, but a competition car was soon developed, using many components from the mighty 300 “Adenauer” Saloon. Designed primarily by chief engineer Rudolf Uhlenhaut, the car was built on a tubular space frame and clothed in aluminium. The configuration of the space frame necessitated unusually high sills, so the hallmark “gullwing” doors, pivoting upward, were adopted in place of a conventional forward-hinged arrangement.

Christened “300SL”, for Sport-Leicht (Sports Light), a team of cars was entered in the 1952 Mille Miglia, finishing 2nd and 4th. This promising result was followed by a 1-2-3 sweep in the Berne Grand Prix and, six weeks later, a 1st and 2nd at Le Mans. A 1-2-3-4 finish at Nürburgring and a 1-2 victory in the Carrera Panamericana in Mexico followed, the latter bringing Mercedes-Benz to the attention of Americans.

Among its American enthusiasts was Max Hoffman, the New York importer for Mercedes-Benz. Hoffman visualised a market for a road going version of the 300SL and ordered 1,000 cars. The production 300SL debuted at the International Motor Sports Show in New York City in January 1954. Whilst the name was retained, invoking the fame of the competition cars, the internal nomenclature designated the new car as W198.

It differed in many respects from its competition forebears. With the exception of 29 special order examples clothed in all alloy, the body shell was now made of steel, with an aluminium hood, doors, and boot lid, and the chassis was made stronger. To compensate for the additional weight, the engine was made correspondingly more powerful, developing 195 brake horsepower, thanks to a direct fuel injection setup, the first ever on a gasoline-powered production car, helping to make the 300SL the fastest production car of its day. In all, 1,400 Gullwing Coupés were sold between 1954 and 1957, approximately 80 per cent of them in the United States.

As demand for the coupé weakened, Max Hoffman’s initial wish for an open version of the 300SL was finally heard by the factory. To transform the 300SL into a roadster, the chassis was re-engineered to accommodate more conventional doors. The revised chassis was heavier, so the engine received uprated camshafts as standard (previously available as a high performance option in the gullwing), and the fuel pump was adjusted to deliver more fuel under full load. The improvements were good for an additional 20 brake horsepower. The rear suspension was redesigned with a compensating spring added to reduce oversteer. During the production cycle, many of the components from the competition cars eventually made their way into the roadster. This included, after March 1961, the addition of four-wheel disc brakes on the last 479 cars. An aluminium cylinder block also replaced the cast iron unit a year later. Production continued into early 1963, by which time, with 1,858 built, it had proved more popular than the coupé.

Delivered new to Mannheim, Germany, this 300SL Roadster was first sold to a Swiss customer. It has had no more than two registered owners since, and the original owner’s widow has confirmed that the 34,000 kilometres now showing on the odometer is consistent with the usage it received during their long-term stewardship; it also features a factory hard top. Many aficionados consider the configuration of this example as the most desirable variant with disc brakes in combination with the more reliable cast iron block. (This particular car is one of the last built before the changeover to aluminium engines.)

This Mercedes has been the subject of a painstaking, five-year body-off rebuild. Acquired as a rust- and accident-free original car, it was restored to international show quality, using new-old stock and Mercedes-Benz replacement components. Performed in Portugal under the supervision of its current owner, the representative of 300SL specialists HK-Engineering for Portugal and Spain, for his personal collection, the restoration is documented with an extensive dossier of invoices and photographs.

The car was finished in its original, authentic Mercedes-Benz White (DB-050), with a contrasting interior in rich Burgundy, and with matching soft top and a corresponding White hard top. The glass has all been replaced with new pieces from the Mercedes-Benz Classic Center, bearing the correct imprints. The Mercedes also includes a new set of fitted luggage by Karl Baisch. Originally delivered without a radio, it is equipped today with a correct new-old stock Becker Mexico unit with electric antenna.

During restoration, several upgrades were made to enhance drivability on today’s roads. Originally built with the shortest-available gearing, required for mountainous countries, it now features the tallest 3.25:1 ratio for effortless motorway cruising. The cockpit has been heat-insulated for maximum comfort, and the stainless steel exhaust system and manifold have been thermo-wrapped.

Additionally, the engine has been upgraded for unleaded fuel with uprated valves and hardened seats. It is equipped with a “123” electronic ignition system, a Dutch product. Originally developed for Formula One racing, this advanced feature individually adjusts the timing of each cylinder to suit driving conditions. The original ignition system was removed, but it is included with the car and could easily be refitted. Today, the rebuilt engine, as modified, develops significantly more horsepower than when new.

A major advance is the Easydrive electric power steering. Developed from the technology of a Japanese-owned factory in France, which furnishes OEM equipment to Renault, Peugeot, and Opel, Easydrive uses a hidden computer-controlled electric motor to assist steering effort, and it is manually adjustable according to the driver’s preference. At maximum assist, the car can be parallel parked with one finger. With no fluids to leak, and no pumps or hoses to disfigure the engine compartment, it provides an ideal solution to manoeuvring at low speeds, and it is easily removed without trace, should original specification be desired. Other upgrades include an electric radiator fan with both thermostat and manual controls, for optimum operation in all weather, and a removable blind on the oil cooler, which helps the oil to come up to operating temperature more quickly. An alternator conversion from HK Engineering has been fitted.

Nearly completed, the 300SL was shipped to Germany, where it underwent a general inspection at HK Engineering in August 2011, at which time it was fitted with the aforementioned tall axle ratio and cockpit insulation. A precision engine and brake system tune-up, along with other maintenance, were performed at that time. The driveability of the car, with its electronic ignition and electric power steering, is said to be “amazing”. An evaluation letter from Hans Kleissl accompanies the car, including his opinion that the car was accident-free and rust-free prior to its meticulous restoration. The car has done fewer than 1,000 kilometres since this inspection.

Fresh, correct, and highly-equipped, this desirable disc brake, hard top 300SL Roadster is both stunning in appearance and exhilarating in performance. As such, it invites close inspection. 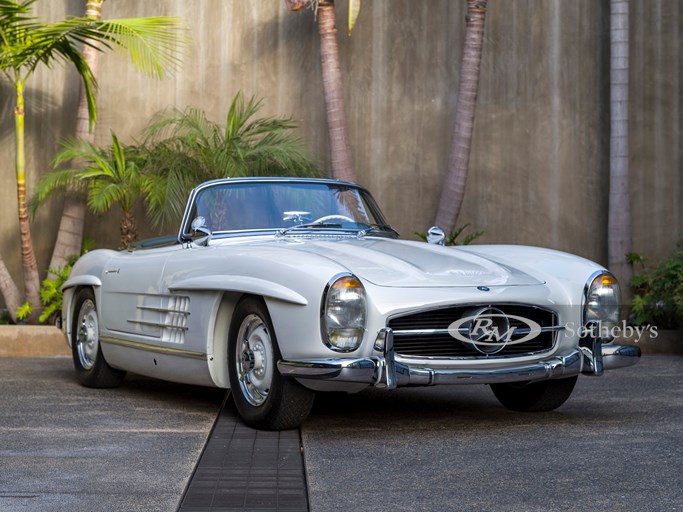