Chassis No.
Engine No.
Documents
6625
50209
Cancelled German Fahrzeugbrief
Please note this car is titled as 1970.

The Lamborghini Islero was unveiled at the 1968 Geneva Autosalon as the successor to the 350 GT and 400 GT 2+2. Whilst the angular style of the car was contemporarily controversial, the passage of time has been kind and today it is the epitome of the type of car that Ferrucio Lamborghini envisioned his company creating from the outset: an elegant gentleman’s express, capable of outperforming its peers at Ferrari and Maserati whilst making the minimum of fuss in the process.

For the chassis, Lamborghini used the same square tube design as that employed in the 400 GT, choosing to retain the same inner structure and wheelbase but increasing the track to permit the use of wider tyres. Carrozzeria Touring Superleggera would have been the logical choice for the bodywork, given its involvement with the 350 GT and 400 GT, but the company had been wound up in 1966 and instead the task fell to a group of ex-Touring employees led by Mario Marazzi at Carrozerria Marazzi. Eschewing the fastback coupe designs of the 1960s, Marazzi’s team created a more conventional three-box saloon silhouette for the Islero, which enabled the cabin to be enlarged in the pursuit of improved ergonomics, refinement and comfort. Perhaps the only flamboyant element to the body were the de rigeur folding headlamps.

Under the low-slung bonnet was the glorious four-cam Giotto Bizzarrini V-12 engine from the Miura and 400 GT, outfitted with six Weber carburetors and capable of 320 bhp, which was channeled through a five-speed manual transmission. In this guise, the Islero saw off the 0-60 mph benchmark in under 6.0 seconds and could boast a top speed of more than 160 mph, whilst comfort and safety was ensured by a fully independent suspension setup and Girling disc brakes all-round.

Despite these credentials and Ferrucio Lamborghini’s endorsement by using an Islero as his personal car, buyers preferred the more outlandish and more ostentatious Espada and only 225 Isleros were built before production was stopped in 1969. Of these, 100 were the later ‘GTS’ cars like this particular example, which are recognisable for their enlarged bonnet scoop, flared wheel arches and brightwork gills behind the front wheels. The ‘GTS’ was also fettled mechanically, benefitting from an extra 25 bhp from the 3.9-litre V-12 to bring it into line with the Miura S’s 350 bhp, as well as a more powerful braking setup. It is also generally accepted that Marazzi’s fit and finish on the earlier non ‘S’ cars was sometimes questionable but that these teething problems were comprehensively overcome with the later S variant.

Originally delivered through Lamborcar Milano in its native Italy, this Islero GTS was finished in the unusual but highly attractive colour scheme of Bronzo Scuro over Senape, which it has been tastefully restored in today. It was current owner in 2015 and imported to Europe from the United States, where it had previously resided in California. For the following three years it underwent a comprehensive restoration both aesthetically and mechanically with the work being carried out by some revered marque specialists in its native Italy: Biondy-Parini and SCN Modena were commissioned for the coachwork and chassis, with the body being removed from the chassis before being taken back to bare metal, repaired where necessary and then restored to the exemplary condition in which it presents today. The chassis was also rebuilt from the ground up, with each suspension component being replaced, along with the brakes and associated running gear.

At the same time the engine and gearbox were removed and fully stripped down, inspected and rebuilt by Top Motors to their exacting standards, whilst the interior was retrimmed in the factory correct Senape colour scheme by Auto Interni. An extremely detailed photographic archive of all the work that was carried out is included in the history file. The car has covered a little over 200 kms since the work was completed in 2018 and was most recently serviced in 2020.

For anyone looking a perfect example of one of the most underrated and rare Lamborghinis of the 20th century, look no further. 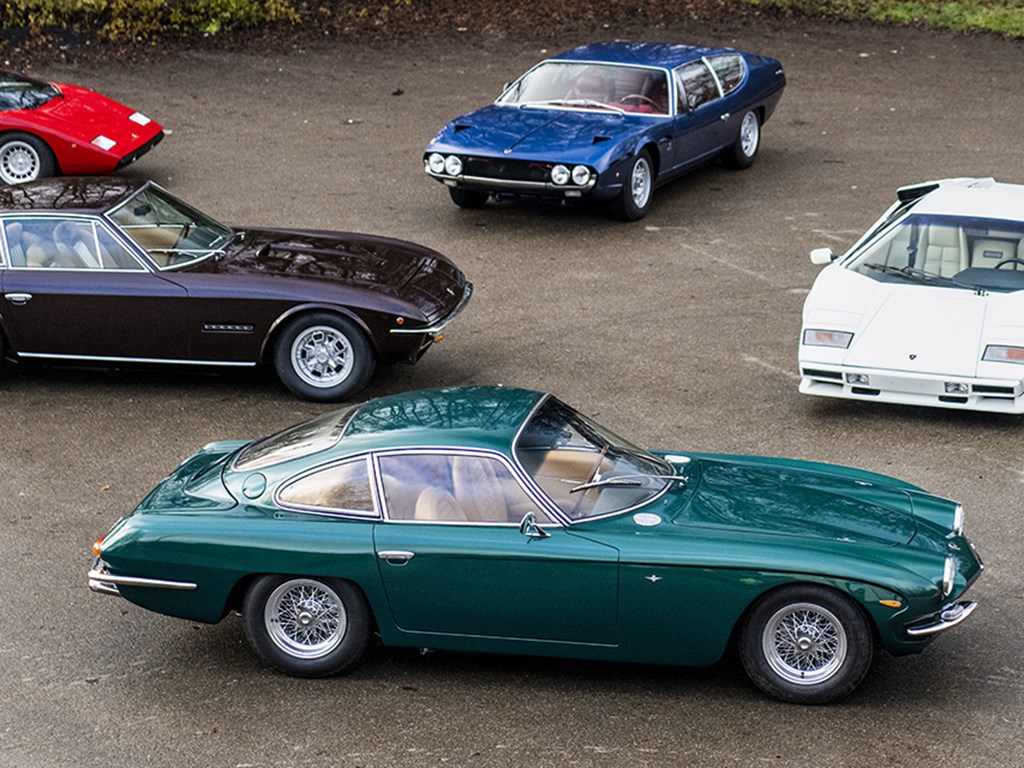