Catalogue View Lots
Chassis No.
Engine No.
HM2861
LR2782
Please note that Internet bidding is not available for this lot. Interested parties that are unable to attend the sale may register to bid by telephone or place a commission bid online at rmsothebys.com.

THE SPEED SIX: IN SEARCH OF POWER

Created at the urging of foremost “Bentley Boy” and Bentley Motors chairman Woolf Barnato, the Speed Six was the racing derivative of the massive and potent 6½-Litre. It could be argued that, in its mechanical specifications, the Speed Six was very similar to and derivative of the 6½-Litre, but that is as fallacious as claiming that the 250 GTO is the same as a 250 GT Pininfarina coupe. The new model boasted from such a host of upgrades, including twin SU carburetors on a new square-section intake manifold. Its performance was above and beyond its sibling by incredible measure. In racing tune, 200 horsepower was possible, and period reports indicated a top speed of 120 mph, comparable to the mighty Duesenberg.

Speed Sixes blasted all over Europe, so dominating Le Mans at 1929 that, at one point, they were so far ahead of the field that they were instructed to reduce to touring speed for the last few hours (and won anyway). After a dominating season they returned to Le Mans in 1930, repeating the same feat down to the “slow finish,” and marking Bentley’s fourth consecutive victory at the world’s greatest endurance race.

As was true for other competition cars of the period, the Speed Six was not used strictly for racing. Chassis configured very similarly to the Le Mans cars were released to private owners and fitted with remarkable custom coachwork, few more remarkable than that offered here.

GH 208: THE JOURNEYS OF A SINGULAR SPEED SIX

This Speed Six, chassis number HM2861, was delivered to original owner J.W. Bealey of Little Minthurst Farm, Charlwood, Sussex, in September 1930, via Jack Barclay of London. As a very late Speed Six, it was constructed with all of the Le Mans-bred updates, including a stronger camshaft, 25-quart oil sump, and “C” type gearbox. Bentley Motors build records, copies of which are on file, detail the original specifications, including noting the original coachbuilder as Corsica Coachworks, also of London.

Corsica’s spectacular body for the car ranks among the most memorable creations of a shop known for the audacious and impressive. Taking full advantage of the 152-inch chassis, they built a car that appears to be all engine, with a hoodline and cycle-style fenders extending almost half the length of the automobile, ending at a five-passenger Sportsman’s Saloon body with a low roofline, split windscreen, and truncated tail. Aside from Woolf Barnato’s famous streamlined coupe, no other “Speed Six” packed as much visual impact as the Bealey car.

The late Hugh Young, a longstanding and highly respected member and officer of the Bentley Drivers Club, acquired the machine in Wool, Dorset, in 1958, by which time it had gained its current engine, LR2782, from another Speed Six. Mr. Young recalled that his wife “Ursula and I brought the Speed Six to Canada in the summer of 1959, in the hold of the Pinemore cargo ship in which we also traveled . . . . We then drove it – unrestored! – from Montreal to Winnipeg via the U.S. That was a real adventure!”

After many years of driving enjoyment with the Speed Six, Mr. Young sold the car in 1976 to Barry Cooney, a well-known enthusiast from Oregon who has owned several vintage Bentleys and Rolls-Royces over the decades. In a recent conversation, Mr. Cooney noted that he took the newly acquired car to the well-known Bentley specialists Hoffman and Mountford and had them perform a full mechanical service before the car was shipped to the United States.

Upon its arrival stateside, the new owner began using his Bentley exhaustively, including driving it on two occasions from his home in Portland to the Pebble Beach Concours, where it was displayed – fresh off the road – in 1981 and 1982. On at least one of those journeys, Mr. Cooney’s friend, the Rolls-Royce and Bentley historian, Diane Brandon, recalls a late-night drive through the mountains with the lights on, something that even the hardiest enthusiasts might not undertake today. On another occasion, the car was driven all the way to Victoria, British Columbia, for a Rolls-Royce Owners Club meet.

In 1984, Mr. Cooney sold his well-traveled Bentley to the late, great collector, Gordon Apker, with whom it remained for the next two decades. During that time it was again returned to Pebble Beach, in 1985, memorably sharing the ramp with the famous “Blue Train” Bentley. It was then acquired for the collection of its current owner, in which it has been maintained since. Further restoration work was performed in the late 1990s, in which the car was refinished in its current livery, inside and out, and fitted with disc-style wheel covers, as it retains today.

Among the rarefied ranks of Speed Six Bentleys, in which every one is special and unique, none packs the sheer emotional punch of the car enthusiasts known as, simply, “GH 208.” Its dark visage stops even the most jaded enthusiasts in its tracks, turns heads even among a Pebble Beach field, and simply and purely is considered one of the most beautiful closed W.O. Bentleys ever constructed. On other cars such statements would be cliché, but on the Corsica Sportsman’s Saloon, they are simply grand reality. 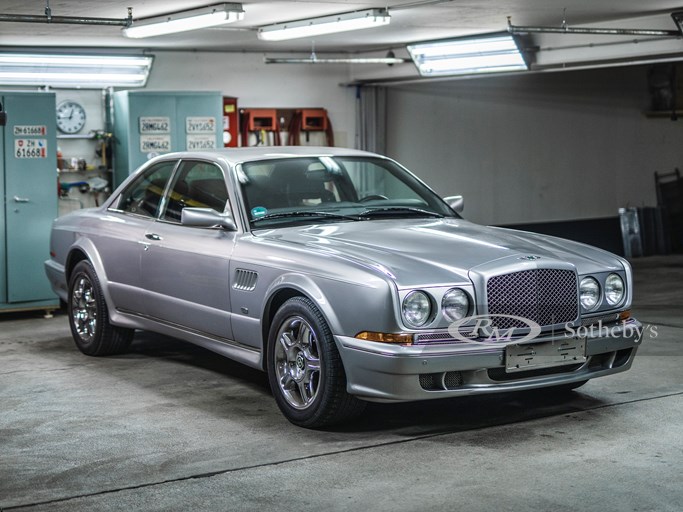