Catalogue View Lots
Chassis No.
Engine No.
Gearbox No.
Body No.
1305 SA
1305 SA
4 SA
15823
Please note that Internet bidding is not available for this lot. Interested parties that are unable to attend the sale may register to bid by telephone or place a commission bid online at rmsothebys.com. Furthermore, bidding on this lot requires a special registration process to be completed no later than 48 hours in advance of the sale. Please contact Client Services at +1 519 352 4575 or clientservices@rmsothebys.com to register your interest.

THE MOST POWERFUL ROAD-GOING FERRARIS OF THEIR ERA

There were Ferraris . . . and then there were Ferraris. Enzo Ferrari always wanted to build a few very exclusive grand touring models for very famous and ultra-wealthy clientele. Constructed in several series, in very limited numbers and most frequently bodied by Ferrari’s favorite carrozzeria, Pinin Farina (known as Pininfarina beginning in 1961), along with Mario Boano and Ghia, the Superamericas were truly the ultimate Ferraris and were nearly all coupes, attracting an exclusive client list.

Individually tailored, as Ferrari historian Dean Batchelor said, they incorporated “many detail differences which enhanced their exclusivity.” Traveling in a Superamerica was traveling in style, Batchelor wrote. “The owners knew it, and all who saw the car knew it, which is what the owners wanted them to know.”

This 410 Superamerica was essentially a modern coachbuilt car, with, in its Series III iteration, a powerful, 4.9-liter, 400-bhp, race-derived, Lampredi V-12 engine. Completed in May 1959, chassis number 1305 SA was the 25th 410 Superamericas built and the 4th of a dozen Series III models produced. As was typical of these bespoke super-coupes, it boasts several special features, including the desirable competition-style covered headlamps, as well as unique rear fenders with one-off taillights. The original color scheme was Nero Tropicale over Naturale leather.

The car was sold through the official Swiss Ferrari dealer Garage de Montchoisy SA of Geneva to Mr. Griffin, an American residing in the city at the time. It was subsequently stored for several years in a Geneva parking garage before being sold to its second owner, Hans U. Maag of Renens, in 1970. Shortly thereafter it was sold through Rob de la Rive Box to well-known American Ferrari connoisseur, Richard Merritt, then to Tom Viltner of Oconomowoc, Wisconsin, and in 1976 to John Hajduk of Chicago. Mr. Hajduk’s Motorkraft of Bensenville, Illinois, completed a full restoration in dark British Racing Green with yellow striping, the same color scheme in which the car is seen today. Afterwards it was sold to John Vernon of Vail, Colorado.

In 1978 the car was purchased by Peter van Gerbig of Hillsborough, California. Mr. van Gerbig was a member of one of New York City’s oldest and most socially prominent families, and was an avid motorist and customer in good standing of both Ferrari and Rolls-Royce, ordering several unique examples of each over the years.

Mr. van Gerbig maintained the 410 Superamerica for four years before selling it to longtime, beloved Ferrari Club of America members, George and Rosella Wamser of Bloomington, Illinois. The Wamsers treasured their 410 Superamerica and enjoyed it for nearly two decades, during which time it was regularly used and seen at Midwestern FCA meets. It was also prominently featured in their good friend Dyke W. Ridgley’s famous book on the model, Ferrari 410 Superamerica Series III (pp. 40–41).

Following the brief ownership of noted collector and vintage racer Dennis Machul, the 410 Superamerica joined the collection of its present owners in the late 1990s and has remained largely out of sight ever since. It retains its original numbers-matching engine and chassis, as well as the original gearbox and rear axle. Much of the original Hajduk restoration, seen in Mr. Ridgley’s book, remains intact, with a wonderful patina now about it, especially regarding the thick, comfortable leather seats. The car had recorded 57,305 miles at the time of cataloguing, and would undoubtedly be a superb choice to be driven and enjoyed with great enthusiasm, just as in the tradition of its caring previous owners. 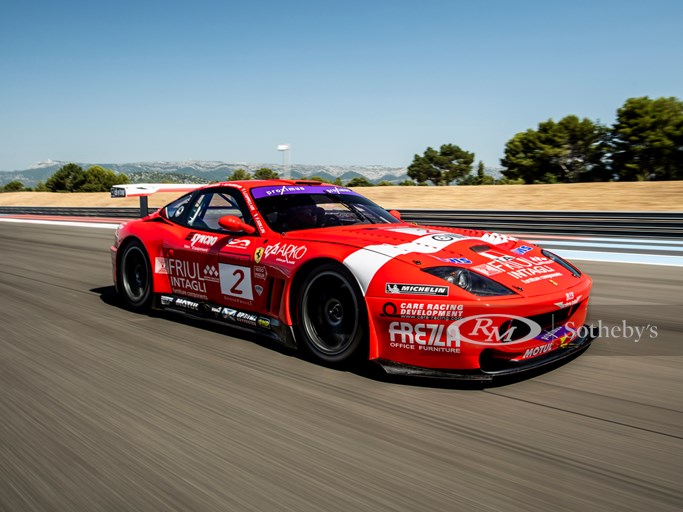