Addendum: Please note that the 2.5% duty is not applicable to the hammer price of this lot contrary to what is stated in the catalog.

In the days when Bugattis crossed France and 4½-liter Bentleys tore through the British countryside, the American equivalent was the Auburn Speedster. Auburn, Indiana’s Auburn Automobile Company revealed its first version of this dashing body style, which was inspired by a Duesenberg show car, for the 1928 model year, and it would offer variations on the theme through to the end of production in 1936.

The 1935–1936 Speedsters were designed by the legendary Gordon Buehrig, and they were audacious even by the standards of their time, as they featured curvaceous bodywork and a straight hood line that shot back from the radiator to a sharply vee’d windshield, down between pontoon fenders, and over gently sloping doors, ultimately descending into a graceful taper at the rear bumper. It was this distinctive rear design, elegantly outlined by chrome and striping, that gave the Speedster its everlasting nickname, which is, simply, “the boattail.”

Underneath, the Speedster shared the same exciting mechanicals as other supercharged Auburn models. The glistening chrome side exhaust heralded the presence of a Schwitzer-Cummins blower, which boosted the horsepower of the Auburn straight-eight to 150, from a normally aspirated reading of 115.

The 150 horsepower was sent to a Columbia dual-ratio rear axle, standard equipment on the supercharged models, which provided two ratios for each gear, one low and one high. The ratios could be changed as often as desired, while at very low speeds or at a stop, by moving the switch in the center of the steering wheel. This provided the supercharged Auburn with much greater flexibility, making it a true “driver’s car” that was ideal for both purring through crowded cities and sweeping down country lanes.

Each Speedster bore on its dashboard a plaque inscribed, “This certifies that this AUBURN AUTOMOBILE has been driven 100.8 miles per hour before shipment.” It was signed by David “Ab” Jenkins, the speed record driver who achieved some of his greatest successes at Bonneville behind the wheel of a late Auburn Speedster. Of course, the plaques were merely factory decorations that were installed on the production line. On the other hand, no one who has driven these cars since has ever complained about a lack of speed!

The car offered here is one of about one hundred fifty last-generation Speedsters built, and it is an authentic Speedster, as it still has its original frame and body. In fact, it still wears the original firewall tag that was applied by the factory in 1936, which confirms its original matching numbers. The 1936 model Speedsters are extraordinarily rare, as they were essentially leftovers of the 1935 line, and therefore, they are highly desired among ACD enthusiasts.

This particular Speedster was owned for many years by a Connecticut enthusiast, David Tunick, who was one half of a pair of brothers who amassed many wonderful automobiles during the early years of the collecting hobby. At various points, the Tunick family owned such legendary motorcars as Bentley “Old No. 1,” multiple eight-cylinder Mercedeses, “Fatty” Arbuckle’s Pierce-Arrow, and this Auburn, which was a CCCA prize winner.

At its sale in 2005, following Mr. Tunick’s passing, the Speedster was found to have aged in storage, but it was still remarkably original and complete. Its new owner arranged for a comprehensive restoration by Jim Stranberg, of High Mountain Classics in Denver, Colorado, at a reported cost of $480,000. Unfortunately, while stunning, the car was finished in incorrect colors, and thus, it failed to win a class award at the 2007 Pebble Beach Concours d’Elegance.

The next owner chose to correct this by immediately commissioning a high-quality repaint in the car’s original black, but he still retained the dark red leather interior of its Stranberg restoration, bringing the Auburn back to the way it would have appeared when delivered new more than 70 years ago. While in UK ownership, it was honored with a Best in Class award at the Concorso d’Eleganza Villa d’Este, and accordingly, it remains in stunning condition, with near superb paint, chrome, and upholstery and exemplary chassis detailing and engine bay. Importantly, it has been Certified Category One by the Auburn Cord Duesenberg Club, which verifies its status as an original, authentic Speedster. It is also accompanied by a large collection of restoration documentation, receipts, and information on the Tunick ownership.

Any Auburn “Boattail” Speedster is a joy to behold and a surprisingly modern-feeling pleasure to drive. This particular car still holds rank among the finest survivors, and it would be welcomed at continued concours appearances or at Auburn Cord Duesenberg Club events. Few American automobiles pack such an astonishing presence. 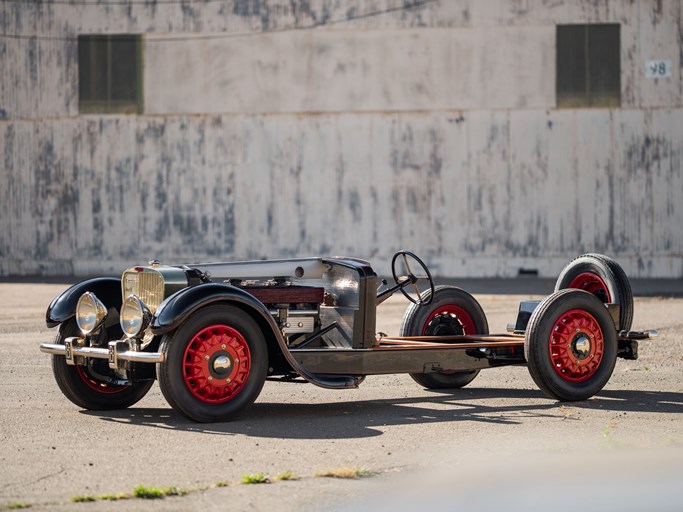