If art is long and life is short, as the Greek philosophers told us, then it is fitting that the vast majority of Pietro Frua’s creations have outlasted his four-decade career as one of Italy’s most renowned coachbuilders. Delightfully diverse in a way that few designers ever are, Frua laid out automobile bodies that were both calm and outrageous, curved and crisp, and stately and sensual. He dressed everything from Ferraris to Rolls-Royces, with the only common cue between his designs being an eye for proportion and a flair for the dramatic, which, ranging from car to car, could be pronounced or delicate.

The spyder bodies Frua designed for the Maserati A6G chassis rank among his loveliest creations. Depending upon the angle from which they are viewed, they appear either crisply tailored or boldly muscular, with subtle creases through the flanks setting off slightly kicked up rear fenders and rounded body sides that seem to flow down and tuck under the chassis. Small bumperettes in the front and rear give the impression of sporty lightness, opening up the deeply scooped grille and cupping the famed Maserati trident. In many ways, the design resembles the famed AC Ace and Shelby Cobra, which it happened to predate it. One has to wonder who inspired whom.

It is believed that three of these Spyders were built, of which one was fitted to A6GCS chassis 2054 and delivered to dealer Guglielmo Dei, of Rome, who delivered it to an American client in early 1954. Importantly, this was the only Frua Spyder mounted to a genuine A6GCS car; the other two were mounted on A6GCS chassis, but they were engineered with the more street-friendly A6G/54 engine. The car was fitted out with a striking chromed side exhaust, emerging like a dragon’s tongue from behind the front wheels and becoming a flicker of silver down the body on the driver’s side. Reminiscent of earlier Maserati racing cars, it added an additional element of drama to the design, the sort of touch that made Frua bodies stand out from the crowd, and it continues to do so today. As a testament to its beauty, chassis 2054 was pictured in Richard Crump and Rob Box’s Maserati Road Cars, with a note stating that “these spyders were most attractive.”

The consignor of this car found the original Frua Spyder body from chassis 2054 in the ownership of noted Maserati enthusiast and Concorso Italiano founder Francis Mandarano, who had acquired it in the American South some time earlier. While the original chassis was long gone—it was converted into a racing car—the body was immaculately complete, aside from a single missing bumper bar, retaining all of its original jewelry-like details, including the original “pFrua” badges, the original instruments, all the door hardware, and unaltered curvaceous lines. In the owner’s words, “I thought of buying it as a somewhat charitable deed: saving from oblivion a beautiful object that would be a shame to let go.”

Accordingly, the body was mounted upon an original A6G/2000 chassis, number 2190, and reportedly fitted from new with an A6GCS engine, which had been restored by Italian automobile expert Nino Epifani, of Berkeley, California; it had its chassis frame shortened appropriately. The bulk of the restoration was completed by renowned specialist Wayne Obry’s Motion Products, of Neenah, Wisconsin, with the goal being to return the car to as near as possible as 2054 had first been when delivered in 1953.

Obry’s hard work resulted in glass-like light silver-blue paint, a crisply tailored blue leather interior with royal blue carpets, and deep chrome; the dashboard is elegant in its smooth simplicity, with clear, easy-to-read Jaeger instruments, ideal for the sporting driver. The car recalls the best of the coachbuilt classics and the bare, elemental fury of the 1950s sporting barchetta at the same glorious time.

This spectacular finish earned the prestigious honors of Best Maserati at the 2003 Concorso Italiano, one of the world’s foremost gatherings of important Italian automobiles. The Maserati appeared again at the concours d’elegance at the Cavallino Classic XIV in Palm Beach in 2005.

Given its connoisseur-owner’s philosophy that cars are best admired not only when standing on a show field, but also when moving against the various backdrops provided by nature, the car has completed two Colorado Grands, as well as the California Mille, performing effortlessly. The owner describes it as “an excellent and spirited driving car.” To better suit modern rallying purposes, a five-speed manual transmission from an Alfa Romeo was installed; the owner retains the Maserati transmission correct to this chassis and will supply it to the new owner upon request. Accompanying the car are photocopies of photographs of chassis 2054 as original, photos of the body as-found, and correspondence with the previous owner, testifying to its remarkably complete and intact condition, as well as historical information relating to this car and model.

French philosopher Simone Weil wrote that “art is the symbol of the two noblest human efforts: to construct and to refrain from destruction.” The coachwork that Pietro Frua created, as one of the masters of the Italian carrozzeria, stood as artful as anything else on wheels during the golden age of the European sports car. Here is one of the finest examples of his functional fine art to have survived; it is presented, through careful preservation and restoration that saved it from destruction, with all the beauty in motion that it possessed in 1953. 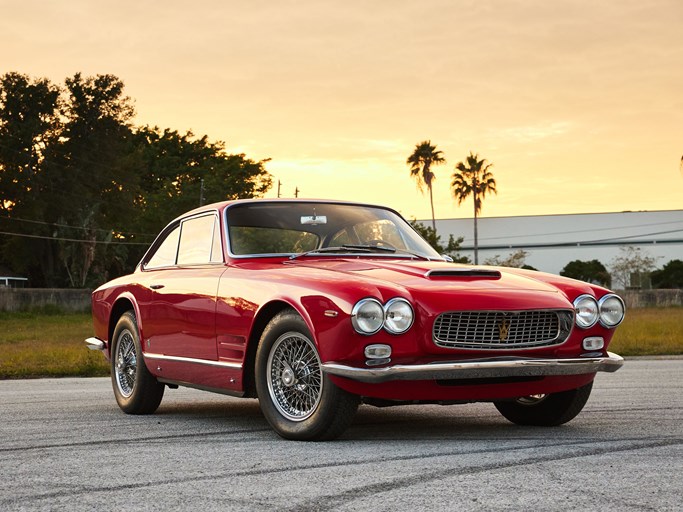