• One of only 75 examples built

Introduced in April 1955, the Silver Cloud represented a watershed for Rolls-Royce. Traditionally, all Rolls-Royce cars had been delivered in chassis form for bodying by outside coachbuilders. The times were changing, however, and the market for coachbuilt cars was contracting, particularly in austere postwar Britain. Additionally, increasingly streamlined automobile styles did not lend themselves to bespoke bodies, particularly those mated with the manufacturer’s front-end sheet metal.

Rolls-Royce’s companion marque Bentley had offered an in-house Standard Steel saloon body from 1946, which had been well received. In fact, the Standard Steel body had been available as a Rolls-Royce Silver Dawn from 1949, though initially only for export. Chief Designer John Blatchley penned the new Silver Cloud saloon, a close-coupled owner-driver sedan that rested on a new box section chassis of a 123-inch wheelbase. A 127-inch wheelbase model was added in 1957.

The Silver Cloud’s engine was the same inlet-over-exhaust (F-head) six-cylinder as the last Silver Wraiths. A four-speed automatic transmission was standard, with a four-speed manual available to special order, reversing the Wraith practice. Drum brakes were power-assisted. Production of the first series of Silver Clouds totaled 2,360, of which 122 were long wheelbase models, a few of them with coachbuilt bodies.

In September 1959, a Silver Cloud II arrived, powered by an all-new aluminum overhead valve V-8 engine of 6,230 cc displacement. Similarly available in two wheelbases, the Silver Cloud II was built through 1962, to a production total of 2,717. The first series Silver Clouds have been retrospectively designated “Silver Cloud I” for clarity.

This car is one of 107 drophead coupes built on the short wheelbase Silver Cloud II chassis by Mulliner-Park Ward and one of only 75 left-hand drive examples. Both London coachbuilders, H.J. Mulliner and Park, Ward & Co., had long histories with Rolls-Royce Ltd. By the late-1950s, with bespoke coachbuilding at a low ebb, Rolls-Royce purchased H.J. Mulliner and two years later, folded Park Ward into the new subsidiary. The new Mulliner Park Ward Ltd. then became an in-house supplier of specialty bodies, typified by this drophead coupe.

Built as a left-hand drive model, it was delivered through J.S. Inskip to a Mr. H. Reedman, of Trenton, New Jersey. Fitted with the standard automatic transmission and air conditioning, it is also equipped with whitewall tires, electric windows, an electric antenna, altimeter, lamb’s wool rugs, and an extra rear speaker with volume control. An unrestored car with selective freshening, it presents very well, with minimal blemishes and signs of wear. Mileage is indicated as less than 80,000. Acquired by the current owner about six years ago, it has been continuously maintained, regularly driven, and enjoyed, in and around Las Vegas. 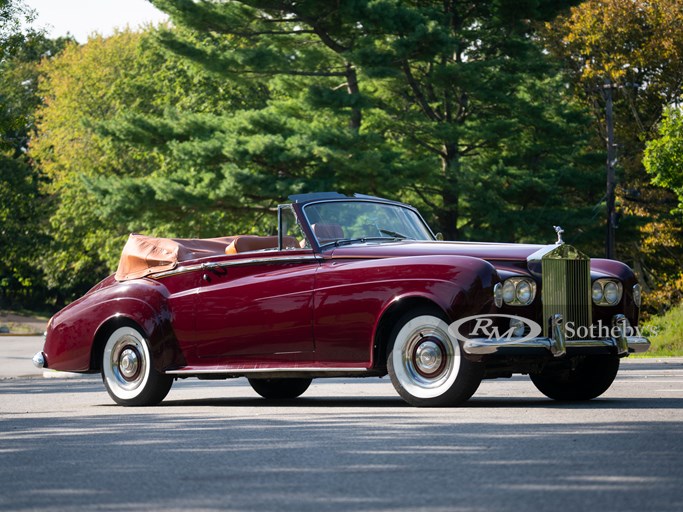