In May 1950, Lancia used the opportunity of the Turin Motor Show to officially introduce a new saloon internally designated as the B10. Named for an ancient Roman road from Rome to Pisa, the new model was dubbed the Aurelia. Unremarkable at a glance, the new car was actually distinguished by a host of advanced mechanical features, including front and rear independent suspension, inboard rear brakes and a new 1.8-litre 60-degree alloy V-6 engine that would soon become known as the world’s first volume-produced V-6.

The Aurelia was built in six series through 1958, increasingly refined with each evolution. The seeming lack of an open version of the model was finally addressed at the Brussels Motor Show in January 1955 with the debut of the B24 Spider America. Based on the concurrent fourth-series cars, the spider actually utilized a purpose-built chassis that was 200 millimetres shorter than the standard Aurelia GT, with independent suspension and transaxle and engine displacement further increased to just over 2.5 litres. Its most obvious selling point was its indelible coachwork from Pinin Farina. Striking a perfect balance, with curved front and rear haunches, a wrap-around one-piece windscreen and dual front bumperettes split by the classic Lancia shield grille, the B24S also lacked external door handles to emphasize its slippery lines. Tiny half-cut doors only further boosted the roadster’s unique charm.

Lancia built 240 examples of the B24 spider through late 1955, with 181 cars specified as the B24S, the ‘S’ (for sinistra, Italian for ‘left’) denoting left-hand drive. The addition of the America suffix to the model’s nomenclature also clarified the company’s intention to market the spider to the U.S.

In 1956, the B24 continued on in a revised design as a true convertible, with a permanent retractable soft top, a more upright windscreen, roll-up windows and standard door handles. These cars were also made in far greater numbers, totalling 521 examples through early 1957. Given the spider’s rarity and purer execution of design brief, as well as its superior aesthetics, the earlier model is generally preferred by enthusiasts today. As the coachbuilt road-going brother of the successful D24 sports racer, which won the 1953 Carrera Panamericana, the B24S Spider America is today regarded as one of the most collectable Italian post-war spiders, claiming competition pedigree, advanced design and breath-taking exterior styling.

The Spider America offered here was completed on 14 October 1955, finished in Grigio over Black leather. It stayed in the famous Gnutti collection in Brescia for many years until 2016. Today, it is beautifully presented in midnight blue with a biscuit tan interior and black carpets, accented by a wooden steering wheel bearing the Lancia logo at its centre; beige-finished wheels; and blackwall tires, creating a handsome and sporting appearance. The car comes with its side screen, jack and wheel wrench, as well as an old FIVA passport and an ASI certificate. It would be a superb entrant in any number of vintage rallies all over the world. 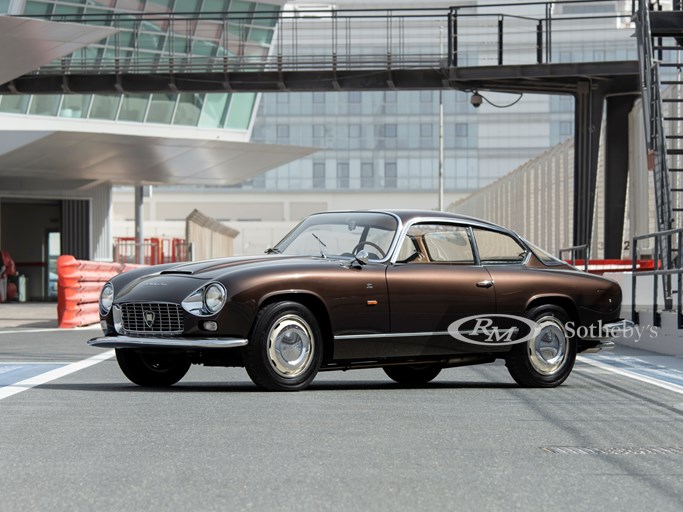