• A “one-off” competition Ferrari, built at the Ferrari factory

Despite the impressive specifications and obvious performance potential of the new 308 GT4, particularly when viewed against the vaunted Porsche Carrera 2.7 RS, the Ferrari was strictly a road car, with no factory-designed competition variant announced in conjunction with its début. Enter official U.S. Ferrari importer Luigi Chinetti's North American Racing Team (N.A.R.T.), whom the late Ferrari collector and FCA member Bill Schanbacher commissioned to create a competitive Le Mans-specification 308 GT4, based on an existing example, chassis 08020, the car offered here.

Back in Maranello at the Ferrari factory, the car was stripped of all unnecessary items to reduce weight, and many steel body panels gave way to lightweight plastic. Whilst the windscreen was retained, Plexiglas replaced the rest of the windows. Other body modifications included the addition of a front air dam, a large rear spoiler and substantially flared wheel arches. Mechanically, the Ferrari DOHC V-8 was modified to produce over 300 bhp, some 50 bhp over stock, using competition-spec 365 GTB/4 Daytona pistons and rods, and the heads were ported and polished. Wet-sump engine lubrication was retained. To enhance braking capabilities, larger-capacity Ferrari Berlinetta Boxer brake master-cylinders were added.

Race-prepared by the Ferrari factory, the car was designated “308 GT4/LM” and entered into the 1974 24 Hours of Le Mans by N.A.R.T. for co-drivers Giancarlo Gagliardi and Jean-Louis Lafosse. Since the car had not yet received FIA homologation, it was forced to run in the Prototype class, against pure competition-type cars from Ferrari, Matra and Mirage. Still, Gagliardi and Lafosse qualified the 308 GT4/LM in the 38th position, a strong achievement nonetheless, considering the car had only been completed shortly before qualifying and had not enjoyed extensive pre-race testing. Ultimately, clutch failure forced the heroic 308 GT4/LM out, after 30 laps and four hours into the gruelling race.

The N.A.R.T. équipe returned to Le Mans in 1975 with a four-car Ferrari attack, including the 308 GT4/LM, with Gagliardi co-driving with American Harley Cluxton. Unfortunately, the 308 GT4/LM was again consigned to the faster prototype class, and Chinetti was unsuccessful in his attempts to have the car placed into the more appropriate GT class, given its production-car origins. Under these conditions, despite it recording a time that put it in the top half of the field, the car did not qualify, as it was deemed a sports-prototype rather than a Group 5 GT car, pitting it against DFV-powered cars and Porsche 908s, once again. The ACO (Automobile Club de l’Ouest) deemed the car too slow, as compared to the prototypes, and disqualified it. Ironically, the 308 GT4/LM’s place was taken by a French car with lap times higher still than this Ferrari! That year, Chinetti withdrew all of the N.A.R.T cars from the race, just 80 minutes before the start.

Following the 1975 Le Mans debacle, the 308 GT4/LM was kept by Chinetti and eventually sold to Howard Torman, also of the United States, who used 08020 only sparingly and eventually sold it to the next owner, a Ferrari connoisseur, in the late-1990s. In his ownership, 08020 was returned to running form, and like all of the cars from the collection, it was fully rebuilt by marque specialists, whilst maintaining all of its period-correct features. No detail was missed in the restoration, and mechanically, the car is now perfect. In fact, the entire suspension was gone through and fine-tuned for track use.

Under the current ownership, the car was also sent back to Maranello to be certified in the Ferrari Classiche program, attesting to and reconfirming the ‘Ferrari Works’ origin of chassis 08020. Campaigned enthusiastically by the current owner, this stellar competition Ferrari finally fulfilled its intended purpose at such marquee events as the 2004 Ferrari Days event at Spa-Fancorchamps, as well as two entries at the 2004 and 2006 editions of the Le Mans Classic. 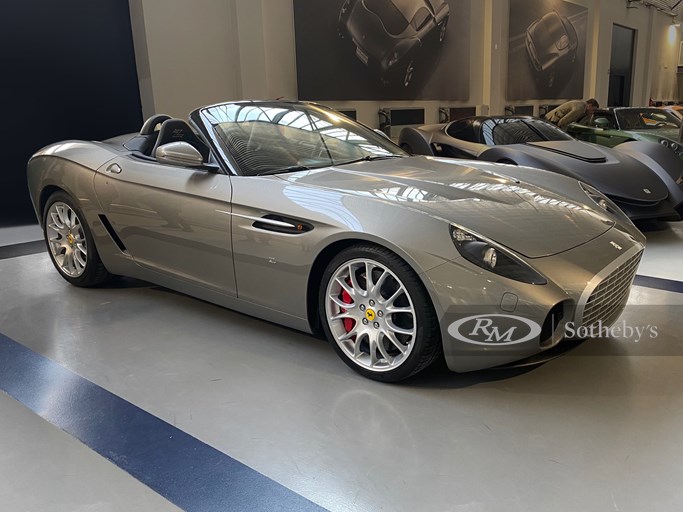