Winton’s early years can be summed up in one word: competition. Having demonstrated the reliability of his car with a 47-hour dash from his native Cleveland to New York in 1899, Alexander Winton entered a single-cylinder racer in the 1900 Gordon Bennett Cup race in France. Although sidelined by wheel failure, Winton’s entry made history as the first American car to compete in a European race.

A glutton for long-distance journeys, Alexander Winton made another New York trip in November to exhibit at the first automobile show. He drove a prototype of his 1901 model, while most of his display cars were shipped by rail. At the show, the mud-spattered car was on the Winton stand with the notice that he had bettered his time by nine hours from the year before.

The first Winton Bullet, a four-cylinder, 57-horsepower racer, was built in 1902. Winton broke his own speed record with it at Cleveland’s Glenville track, setting a new mark of 55.38 mph. A match race at Grosse Pointe, Michigan, however, against Henry Ford’s 999 with Barney Oldfield at the wheel, was less successful, as Winton dropped out with ignition trouble.

The Winton long-distance saga really hit its stride with what Ken Burns celebrated as “Horatio’s Drive.” On 23 May 1903, Dr. H. Nelson Jackson and Sewall K. Crocker left San Francisco in a 20-horsepower Winton bound for New York. Their ordeal was arduous, requiring many repairs to the car, detours to find passable roads, and ingenuity to find supplies. Against all odds, they reached their destination 63 days later, having made America’s first transcontinental journey by automobile.

Winton contested the Gordon Bennett again in 1903, with a pair of eight-cylinder Bullets. Beset with mechanical problems, both cars retired, and with them Alexander Winton as a racing driver. He did, however, maintain the racing team, and Barney Oldfield toured with the Bullets, setting records nearly everywhere he went. Oldfield and Winton developed differences of opinion in 1904, and they parted ways in June. Winton replaced Oldfield with Earl Kiser, a Dayton, Ohio, native, who set yet another record at Glenville that August. The following year, Kiser had a bad accident in the Bullet. Thrown clear, he lost a leg in the aftermath. That spelled the end of Winton racing, but Kiser continued his career as manager of the Winton agency in Pittsburgh.

The year 1905 saw the introduction of the classic-shape Winton radiator that would be used until the end of production. Wider than it was high, the new unit had rounded lower corners and a prominent header tank. Three different four-cylinder cars were offered: Models A, B, and C, priced from $1,800 to $3,500.

For 1906, the marque hop-scotched over the alphabet to the Model K, a 30-horsepower four-cylinder car. In many ways equivalent to 1905’s Model B, it had a re-designed and more spacious body. In contrast to the previous year, which offered three wheelbases and four different bodies, 1906 was “one size fits all,” with a 102-inch wheelbase and both touring and limousine bodies. Despite the lack of variety, Winton’s sales held steady at around 1,000 cars annually.

The current owner acquired this Winton from the well-known Cleveland collector Joe Loecy in 1982. Shortly thereafter, he commenced a full restoration that would take two decades to complete in and among other projects. The result was so striking that it was invited to Pebble Beach in 2010 and shown on the prestigious oceanfront greens.

Despite being on a relatively short wheelbase, it towers over bystanders. An off-white undercarriage and fuel tank combine with all-white tires and wheels to contrast with the red body and fenders, an effect more subtle than if the undercarriage were black. The upholstery is black buttoned leather, and it takes a close look to discern that the pocketed door panels and the foot rest are original to the car, along with the stylized cast brass initials of the first owner on the outside of the doors. The brass lighting is by Gray and Davis, and it is equipped with a Desmo brass bulb horn. Instrumentation consists of a Jones 60-mph speedometer, a Jones stem-wind clock with second hand, and an ammeter. A black canvas top provides shelter from the sun, and for more uncomfortable elements, the car is equipped with a roll-down windshield and a full set of side curtains, which make touring in cooler weather much more comfortable.

The engine compartment is very presentable but not overdone, with all wiring and hardware correct for the application and the era. The cylinders are cast in pairs and mount to a cast aluminum crankcase. The valves are unusual to today’s eyes, as they are in an early F-head arrangement, with the intakes above and opposed to the exhaust valves. The intakes are “atmospheric” or “automatic” in that they operate merely on suction of the piston’s downward intake stroke. This technique, which simplified the valve train, was abandoned soon afterward in favor of the better timing control, though less breathing, of L-head and T-head engines.

Eligible for Brass and Gas and Horseless Carriage tours, this car makes a strong statement wherever it appears. Brass cars of this caliber are scarce in the marketplace, and this one represents an uncommon opportunity to acquire one of the finest restored examples. 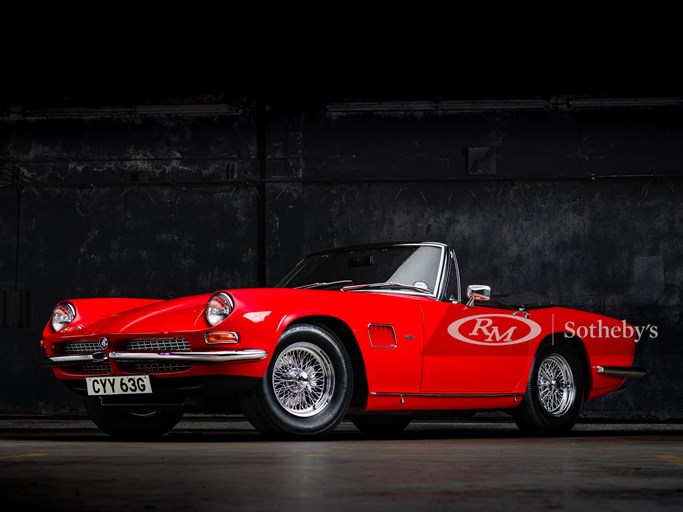