Catalogue View Lots
Chassis No.
10375
Please note that Internet bidding is not available for this lot. Interested parties that are unable to attend the sale may register to bid by telephone or place a commission bid online at rmsothebys.com.

The replacement to the 275 GTS, the 330 GTS, was designed to be an elegant, open-top, V-12 grand tourer for Ferrari’s best customers looking for the finest automotive experience money could buy. In addition to plenty of room for two plus their luggage, it also boasted an incredible set of performance figures. It boasted a top speed of 150 mph, and the 330 GTS could easily outpace just about any other car on the road when it was new.

Unveiled at the Paris Motor Show in October of 1966, the 330 GTS epitomized mid-’60s Italian GT styling with its uncluttered and elegant design, from its classic nose characterized by the signature shallow egg-crate oval grille to its triple-louvered vents on the rear flanks of the front fenders and on to the seductive tapered tail. The impeccable style carried on to the car’s interior, which was luxuriously appointed with twin leather bucket seats and a wood-rimmed, aluminum steering wheel. With remarkably spacious proportions inside, this was the perfect place to be for thousand-mile road trips across the country or for a quick trip across town.

Aside from the obvious addition of its convertible top, the 330 GTS was identical to the 330 GTC coupe that had been unveiled a few months earlier at the Geneva Salon, and hailed for its superior dynamic balance due in part to the innovative rear-mounted transaxle efficiently distributing the weight of the drivetrain. The convertible, however, was built in much more limited numbers than its closed sibling. While 598 330 GTCs were built in total, only 99 of the 330 GTSs would leave the factory gates by the time GTS production concluded in 1968, making the convertible a rare sight in the day, and even more so today. Today, these 99 cars are highly sought after by collectors for their stylish flair as well as their superb and satisfying driving characteristics.

The car offered here was completed in September 1967, finished as a U.S.-specification car factory equipped with the desirable Borrani wire wheels and power windows, and was first sold through Bill Harrah’s famous Modern Classic Motors of Reno, Nevada, to an original owner in Los Angeles. The first known advertisement for sale was in the Los Angeles Times in 1975, and was subsequently owned by Newport Beach collector Byron Tarnutzer in the early 1980s, then in 1993 was acquired by the noted enthusiast, Robert Pond. Mr. Pond had the Ferrari fully restored and maintained it for 13 years, before selling it to Malcolm Liu of Salem, Oregon. It was then refinished in the original color scheme, Rosso Cina over Nero.

In its current ownership the car has received a fresh engine rebuild by RPM of Vermont, including new pistons and rods, and inspection, machining, and reinstallation of the crankshaft, at a cost exceeding $60,000. The consignor also invested in a significant amount of work by Ferrari Classiche in Maranello, including a rebuild of the carburetors, new headers and exhaust work, a complete gearbox overhaul including renewal of the transaxle synchros, new correct Borrani wheels and tires, and a new top boot, as well as locating proper sets of books and tools. At this time the car was also Ferrari Classiche Certified with its type-correct engine. All improvements are documented by accompanying photographs, receipts, and invoices.

Beautifully presented and sitting “just right” on its fresh set of (five) new Borranis shod with new, correct Michelin XWX tires, this car is every bit as emblematic as the open GT of its era – an iconic 330 GTS in classic original colors, exactly as it first sped through the streets of Los Angeles decades ago. 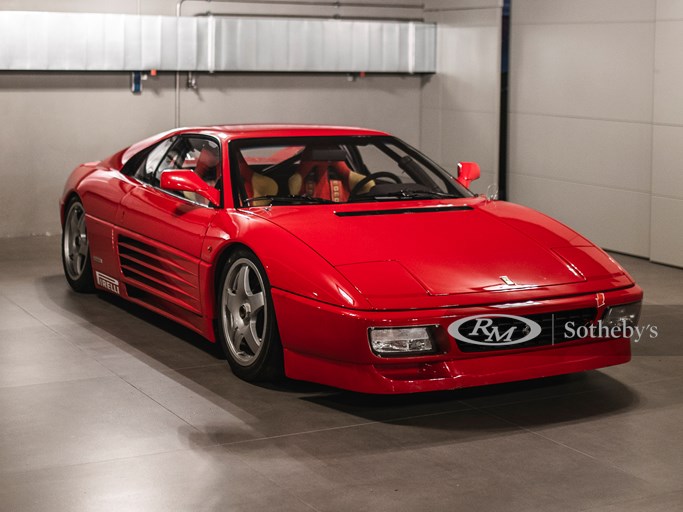