Bob Berry behind the wheel of OKV2 at the 1957 British Grand Prix at Aintree.

OKV 2 at the 1957 Euopean Grand Prix at Aintree with Jack Fairman.

Courtesy of the Klemantaski Collection.

Courtesy of the Klemantaski Collection.

Jack Broadhead with Stirling Moss pointing out a feature of the car to Bob Berry.

Catalogue View Lots
Chassis No.
Engine No.
XKD 403
E 2065-9
Please note that Internet bidding is not available for this lot. Interested parties that are unable to attend the sale may register to bid by telephone or place a commission bid online at rmsothebys.com. Furthermore, bidding on this lot requires a special registration process to be completed no later than 48 hours in advance of the sale. Please contact Client Services at +1 519 352 4575 or clientservices@rmsothebys.com to register your interest.

Please note that the spare Works engine is not present on site. The seller will assist with arranging its transportation to the successful bidder.

After winning Le Mans twice in three years with the C-Type, Jaguar realized that 1954’s contest would require a freshly designed model. The result was the legendary D-Type, one of the first cars to feature monocoque construction and all-wheel disc brakes, which would go on to win Le Mans three consecutive years between 1955 and 1957.

Chassis no. XKD 403 was the lead car of the three Works entries prepared for Le Mans in 1954. It officially completed construction on 3 June, fitted with engine no. E 2003-9 and finished in traditional British Racing Green. The D-Type was registered for road use as OKV 2 and was entrusted to principal Jaguar drivers Stirling Moss and Peter Walker (the same team that placed 2nd at Le Mans the previous year). Designated as #12, XKD 403 was the fastest car in practice, heightening expectations that Coventry would triumph over Maranello once again.

Unfortunately, at Le Mans all three team cars experienced an engine misfire issue that was traced to contaminated fuel (oddly, Jaguar was the only team provided with polluted fuel). Regardless, Moss managed to take the lead during the earlier hours, also setting the fastest time with 172.97 mph on the Mulsanne Straight. However, around the twelfth hour after 92 laps, at the end of another high-speed run down the straight, the D-Type’s brakes began to fail and Moss deftly swung into the safety road to the pits, where the car retired.

A few weeks later at the 12 Hours of Reims, with Moss and Walker driving, OKV 2 did not finish once more. At the Tourist Trophy at Dunrod in September the D-Type was fitted with a 2.5-liter engine, no. E 2005-9, and Peter Whitehead and Ken Wharton finished 5th. Following the season’s conclusion, XKD 403 underwent use as the factory’s development car for the 1955 Le Mans and played a key role in Jaguar’s success over the next several years. OKV 2 was designated as the Workhorse for test driver Norman Dewis, now with a 3.4-liter engine, no. E 2004-9. Notes of his test work, as well as later correspondence, are noted in the car’s extensive file, including his assertion that “this car is one of the best examples of the works ‘D’ types.”

For 1955, Coventry undertook some modifications to the D-Type, using longer noses and a revised engine to win Le Mans outright. XKD 403 continued as a factory car in several contests, finishing 3rd at Silverstone in May with team driver Tony Rolt at the wheel. Dewis drove the car at the Brighton Speed Trials after which it was utilized as the factory’s test car for Le Mans drivers that year. At the testing, OKV 2 was driven by illustrious competitors such as Mike Hawthorn, Jimmy Stewart, and Ninian Sanderson, amongst others.

In May 1955, the D-Type was sold to Jack Broadhead with the intention of competition use by driver Bob Berry, who was also Jaguar’s public relations manager. Berry drove the car in several British events during the season, finishing 2nd at Goodwood thrice, 2nd at Oulton Park, and 3rd at Aintree. En route to the Portuguese Grand Prix in late June, the transporter broke down. The tools and spares were loaded in OKV 2 and it was driven 980 miles to the race. Incredibly, the D-Type finished 5th and was then driven the 980 miles back.

After several more entries by Berry, OKV 2 was returned to the factory for maintenance, and the engine, gearbox, and rear axle were rebuilt. An accident at the season-ending Tourist Trophy necessitated some chassis and bodywork, and the opportunity was taken to fit a stiffer front anti-roll bar and a new rear anti-roll bar assembly. Berry continued to race the D-Type during 1956, finishing 1st at both Oulton Park and the Goodwood Whitsun Meeting in May where Bob qualified on the pole and led from flag to flag, winning the race by 23 seconds. At the later event at Goodwood, Berry was involved in a bad accident. The car returned to Jaguar following the incident and in short order, was fully rebuilt at the factory, including a production D-Type tub with a steel front subframe. Factory notes indicate that XKD 403 was then “repaired by [experimental] after ’56 Goodwood shunt.” The car was back up and competing by September, with one win and finishing between 3rd and 6th place at a number of events.

In March 1957 the factory fitted XKD 403 with a full-length windscreen and a passenger door, and later that month driver Peter Blond finished 2nd at Snetterton. Le Mans winner Ron Flockhart roared to 1st place at the British Empire Trophy Race in early April, while Berry enjoyed several 2nd-place finishes a month later, as well as an outright victory at Oulton Park in October. In early 1958, the factory replaced the engine, from E 2004-9 to E 2065-9, and fitted a new gearbox, and Reg Harris then placed 2nd at Silverstone in May.

In August 1960, XKD 403 was sold to Gerry Crozier, and he continued to race the car in minor contests, finishing 2nd at the Essex Hill Climb in October. He sold the Jaguar a year later to David Jacox, a former pilot based in Calgary, Canada, who went on to manage several large aviation companies. Jacox offered the car for sale in 1962, as confirmed by a period advertisement in Road & Track magazine.

Jim Baker, a mechanic for the Le Mans-winning Ecurie Ecosse teams and a friend of David Jacox, drove the D-Type to Toronto to arrange a sale to Jim Catto of Ontario. Catto employed a British mechanic named Alistair Smith, who prepared the car for further racing and entered it at Mosport Park in June 1963. During the race, Smith was tragically killed during an off-course low-speed incident as XKD 403 reportedly turned on its side on an embankment as he tried to exit the car. The owner garaged the Jaguar indefinitely, ultimately resulting in 17 years of storage.

In 1980 the Jaguar was removed from storage and sold to Godfrey Miller of Canada, and he arranged a sale to the renowned marque specialists at Lynx Engineering in England. Principle mechanic Chris Keith-Lucas, soon to be a recognized niche expert in his own right, restored the otherwise complete D-Type, and notes of his recollections of XKD 403 “as an amazingly un-spoilt “time-warp” car” are included in the car’s documentation.

Following refurbishment, XKD 403 was sold to Jim Wallis of Sevenoaks, England, and he used the car at events on occasion while retaining possession for 14 years. In 1995 the D-Type was purchased by Robert Cooper of Gloucestershire, and he continued to sparingly use it, most significantly attending the Jaguar Factory Cavalcades to Le Mans in 1996 and 1997.

In 1999, OKV 2 was sold to marque expert and historian Terry Larson of Mesa, Arizona, whose first drive in the car was racing it at Goodwood. Larson put over 20,000 miles on the car in numerous tours and races during his ownership. Jaguar’s chief development test engineer for 34 years, Norman Dewis also raced the car twice at the Monterey Historics. Terry assembled a vast trove of paperwork, including a number of original factory documents and letters. During 12 years of care, Larson used the D-Type at numerous tours and races, including the 2000 Copperstate Classic, the California Mille in 2000 and 2002, the Wine Country Classic in Sonoma in 2000 and 2003, as well as the Monterey Historic and Pre-Historic races on several occasions. The Jaguar also participated in the C-Type and D-Type Tours in Arizona no less than a dozen times. Perhaps the apogee of Larson’s ownership transpired in August 2010, when the D-Type was presented at the Pebble Beach Concours d’Elegance as part of the year’s Jaguar celebration. Purchased in 2011 by the consignor, OKV 2 has continued to enjoy use in events such as the 2013 Wine Country Classic and the 2015 Monterey Historic races.

XKD 403 is one of five Works cars built in 1954 and is undoubtedly one of the most actively raced D-Types of them all, having campaigned in at least 55 races during the 1950s alone (including 24 podium finishes, of which five were overall victories). As the Workhorse for D-Type development, this car has been driven, in practice or competition, by 16 of the factory’s most legendary drivers and associated privateers, including Stirling Moss, Peter Walker, Mike Hawthorn, Duncan Hamilton, Jack Fairman, Peter Whitehead, Ken Wharton, Bob Berry, Jimmy Stewart, Desmond Titterington, Don Beauman, Peter Blond, Ivor Bueb, Norman Dewis, Ron Flockhart, and Ninian Sanderson – the who’s-who of Jaguar racing. Having been extensively raced by Jaguar and then retained by the Experimental department for further testing and development, XKD 403 is presented exceptionally authentic condition from when it left the factory in 1956. This remarkable D-Type is a veritable cornerstone of Jaguar’s competition history.

OKV 2 benefits from a deep file of research, including factory documentation, the 1954 Le Mans entry forms, personal notes from Norman Dewis and Bob Berry, hundreds of period photographs, and FIA papers. Prospective bidders are encouraged to review the extensive documentation prior to the sale as well as to inspect the car onsite in Arizona. The car is also accompanied by a spare Works engine with correct RAC markings. As recounted by feature articles in magazines such as Jaguar Heritage, Classic Cars, and Jaguar World, this legendary racing D-Type has been fastidiously cared for and maintained by some of the most significant names in the Jaguar niche. 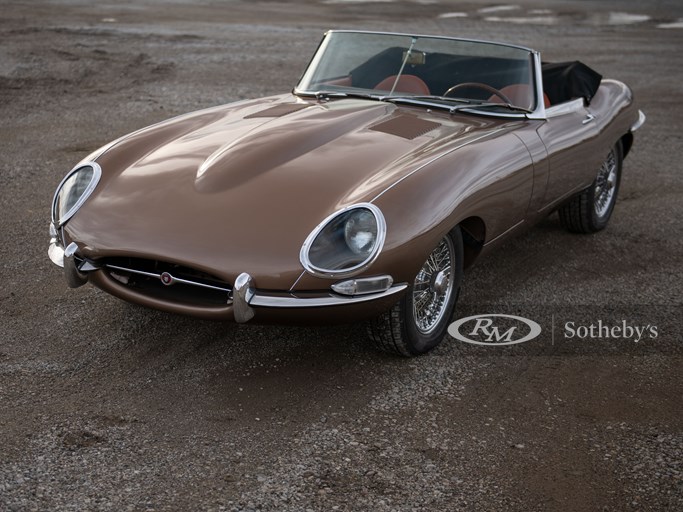 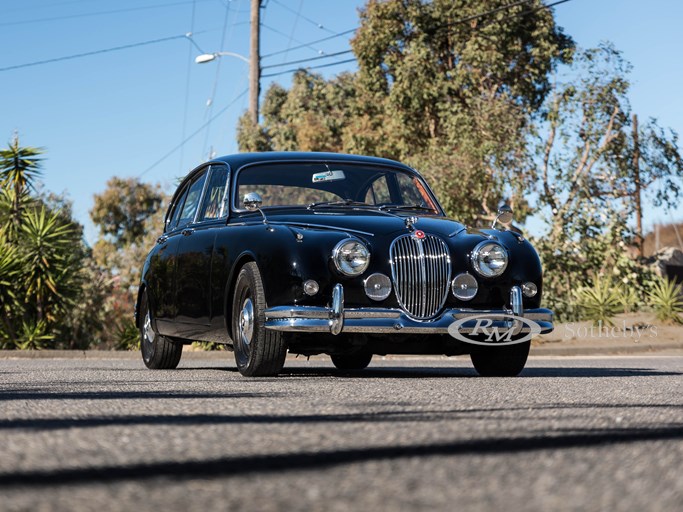 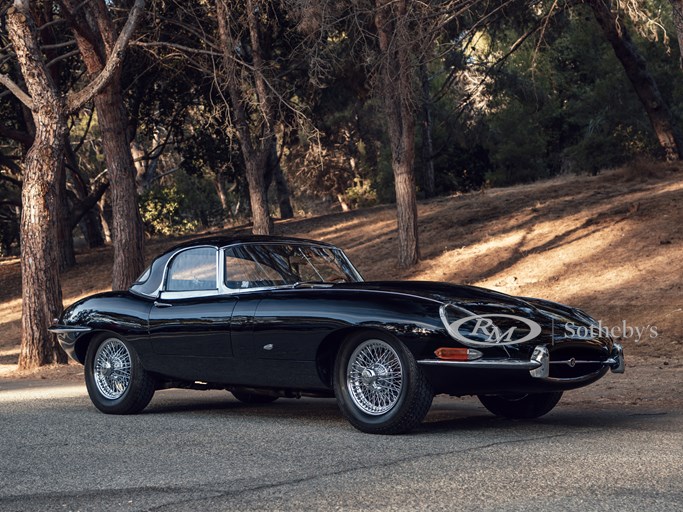