The Volkswagen Transporter debuted at the 1949 Geneva Auto Show, and by the time production ended in Brazil in December 2013, more than nine million had been built. Among the most desirable of these long-lived vehicles is the first-generation “split-window” Transporter, so-named for its two-piece windshield, which was produced from 1950 until 1967 and first sold in the United States in 1952.

The Microbus offered here is the most desirable 23-window passenger Microbus and, according to its “M” plate, is finished in its original two-tone combination of Turquoise and Blue White. It is equipped with a split windshield, eight side windows, three rear windows, and eight small skylight windows indicative of the model, as well as a full-length sliding sunroof. A rare “walk-through” model, it is also fitted with the desirable opening “safari” windshields, an $800 aftermarket item, as well as six pop-out side windows. However, its most remarkable accessory is the matching 1967 Eriba Puck camping trailer, believed to be one of five known survivors of a model designed specifically to mate with a Microbus; it contains a two-burner propane stove, a sink, a dining table, a pop-up roof, and twin beds. Incredibly, the camper weighs only 700 pounds.

Built in Wolfsburg, Germany, on March 13, 1963, according to its Certificate of Authenticity, the bus was subsequently sold new in San Francisco. Some years later, the bus was purchased by a private girls’ school in Kansas City as it offered comfortable seating for nine passengers. In the 1990s, the bus and trailer found their way to San Francisco with Microbus enthusiast David Yost, who reportedly performed a bare-metal restoration during his 12-year ownership, including spending an estimated $11,000 on the camper alone, renewing its paint, top, stove, refrigerator, and sink. The caravan was then sold in the mid-2000s to Ryan Gardner of St. George, Utah, but was driven only about 1,000 miles in the next nine years, mostly in parades.

Today, the Microbus is owned by another well-known Microbus enthusiast who has owned six such examples and is intimately familiar with their nuanced details. The VW and its trailer were mechanically and cosmetically restored once more in his ownership, including a renewed interior with matching luggage. A rebuilt 50–brake horsepower, 1,585–cubic centimeter engine was also fitted to the bus by a marque expert in Denver. The owner notes that the Microbus won People’s Choice at its first show this past September “by a landslide.”

Accompanied by extensive sales literature, ownership documents, and service and restoration records, this is the ultimate original Microbus package. It will delight onlookers, its lucky new owner, and any number of his or her friends alike. 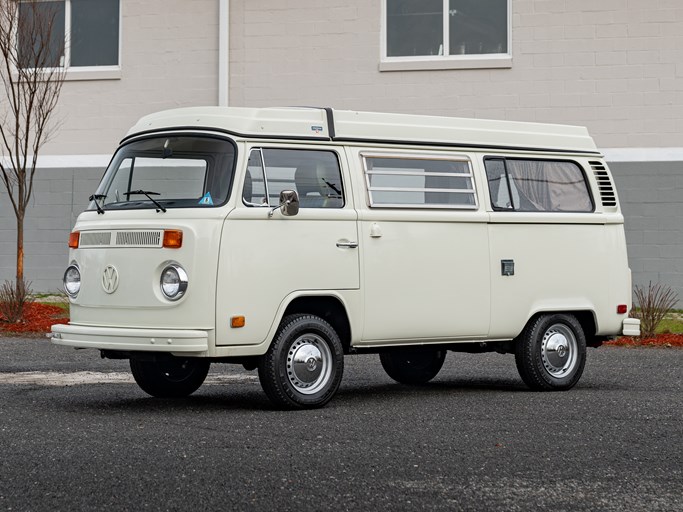