The 3½-Litre Bentley was introduced to the public at the Ascot Race Course in August 1933. To limit re-tooling costs, it was based on the Rolls-Royce 20/25 horsepower chassis. The new Bentley engine was reconfigured from the 20/25’s 2¾-liter motor by increasing displacement and adding a new cross-flow head, twin SU carburetors, a higher compression ratio, and a re-profiled camshaft. The result was a fast, smooth, long-lasting, responsive, and excellent-handling car that was marketed as “The Silent Sports Car.” Well-received by the press and public alike, 1,191 were sold between 1933 and 1937.

The car on offer, B203AE, was originally sold to G. Fitzherbert Wright by University Motors, of London, on March 26, 1934. Copies of the original documents accompany the car, which include specific equipment and dynamometer test results. Originally, the car was fitted with a Hooper four-door saloon body, because the owner anticipated using the car for “in town” transportation as well as continental touring.

B203AE later belonged to Captain Percival Kent, of Sherborne St. John in Hampshire. A letter accompanies the car from his neighbor, A.D. Carter, who remembers that the eccentric owner only drove the car two weeks a year, at Christmas. In intervening years, the handsome Bentley made its way to the United States and was discovered by West Coast Bentley enthusiast Gary Wales as a chassis and engine, complete and original, with verified matching numbers.

Mr. Wales had the good fortune to find an original Park Ward drophead coupe body that had been removed from its original chassis, B32EJ. Wales’ subsequent and painstaking full mechanical and cosmetic restoration of B203AE exceeded $400,000. Accompanying the car are 160 detailed photographs of the restoration, which was completed in 2009 with no-expense-spared. The car is tastefully presented in burgundy with maroon fenders, a central spotlight, a rear-mounted spare, and fitted luggage.

The “flying bee” mascot, a rare Lejeune piece, was installed by Wales, as it was known, according to A.D. Carter, that Captain Kent was a beekeeper. The insulated Blackwood Burgundy top features a luxurious Wilton headliner, which would need to be modified to enable the top to be lowered if open-air driving is desired. Although it is not confirmed, the hardware for the operational top is believed to be in place.

B203AE is by no means built up from other Bentley components. Simply put, it is an original 1934 Bentley chassis with an original 1935 Park Ward drophead coupe body. The car comes complete with the original fitted hand tool tray, road tools, owner’s manual, and its original British registration plates, MG 6666. Even more remarkable, this car retains its original, factory-specified “knock-off” racing wheels. Even the under-seat tool kit is substantially complete.

From 1933 through 1936, 1,177 Bentley 3½-Litre cars were produced in 12 VIN series. About half of those, or 529, were bodied by Park Ward. This car is one of the earliest produced and is part of the first VIN series, “AE.” Such cars are in great demand by Bentley enthusiasts and astute collectors of all marques. Moreover, they afford the new owner a lovely entry for participation in events organized by the Rolls-Royce Owners’ Club, the Bentley Drivers Club, the Rolls-Royce Enthusiasts’ Club, and even the Classic Car Club of America. 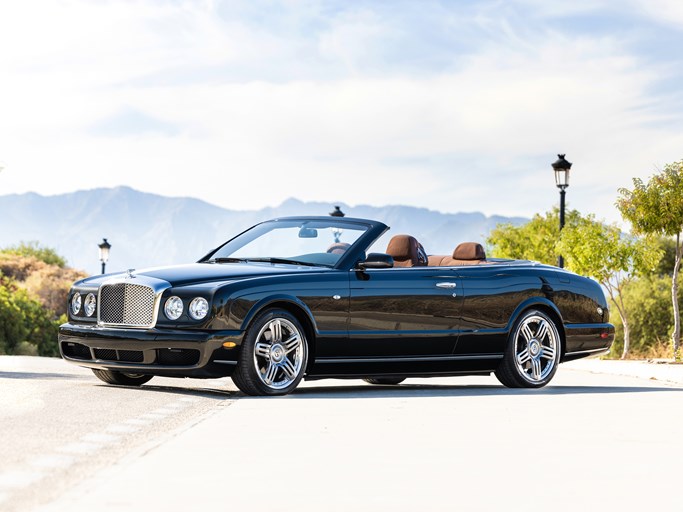