The 1974 model year marked the end of an era for Jaguar, as it was the final production year for the E-Type, one of Jaguar’s most celebrated post-war models. Throughout its transition from the Series I 3.8-liter inline-six to the Series III powered by a 5.3-liter V-12 engine, the E-Type had remained an icon of British engineering and design. Over the E-Type’s 13 years of production, it had evolved into a comfortable grand tourer, and the V-12 cars were the pinnacle of that evolution.

The final year E-Type on offer here has to be one of the most impressive examples remaining. A one-owner car from new through 2020, it has just 2,700 original miles and is presented in completely unrestored, preservation-level condition.

Its story tells of the type of car we all dream of finding.

As a young man in the 1960s, James Karr of Milwaukee, Wisconsin had lusted after an E-Type, but his parents told him they would not approve of him buying such an impractical machine. By 1974, Karr was a 26-year-old who still hadn’t lost the desire to own an E-Type. He visited Jaguar dealer P.J. Kaufmann Co., Inc. in nearby Thiensville, Wisconsin and found this Regency Red S3 V-12 E-Type Roadster on the showroom floor. Karr’s parents still told him they did not approve of the purchase and that he should walk away. But the pull of a four-speed, V-12 Jaguar roadster superseded such practical advice and thus he became the original owner of chassis number UE1S23478 on 26 July 1974—the day before his 27th birthday.

Karr cherished his new Jaguar, driving it sparingly on nice days for the first few years, taking care to never leave it unattended in a parking lot or even drive it to work. He made sure to have it serviced by the book, returning to P.J. Kaufmann’s for the break-in service and an additional oil change after that. Karr’s wife recounts that she was never allowed to drive the Jaguar, but they did take it on one overnight trip to Chicago—the only time it ever left the Milwaukee area.

At the end of the summer of 1976, Karr placed the E-Type in their garage for its second winter of storage, with 2,700 miles on the odometer. As always, he parked it on top of plywood sheets and tucked it in tight. The summer of 1977 came soon enough, but Karr had a new job and a family that now took precedent over the E-Type. The plan of getting it out “soon” rapidly became “next summer.” And then the summers rolled on. Eventually the Karrs moved to New Castle, Pennsylvania, but kept the house in Milwaukee, with the E-Type tucked in the garage. Years turned into decades, and eventually even if one desired to remove the E-Type from its extended hibernation, the trees that had grown tall in front of the garage door would have prevented it.

Karr passed away in October 2019 having never driven his E-Type again. In 2020, his widow decided to sell the Wisconsin house, prompting the need to also find a new home for the Jaguar. The real estate agent called Milwaukee-based automotive historian Colin Comer to come take a look. Comer immediately purchased the long dormant, 2,700-mile Jaguar from Mrs. Karr and set about making it roadworthy for the first time in 44 years. Chosen for this task was Cliff Ebben, a factory trained British Leyland technician and the retired former lead technician at Wayne Obry’s famed shop Motion Products, in Neenah, Wisconsin. Ebben serviced the complete engine, fuel, cooling, and braking systems, installed a new stainless steel exhaust, and went through the car end to end, returning it to perfect health after its long nap.

Karr’s E-Type is certainly a dream find. With its stunning originality, 46 years of single ownership and just 2,700 miles from new, it would be hard, if not impossible, to find a more impressive example of a final-year Series 3 V-12 E-Type Roadster. 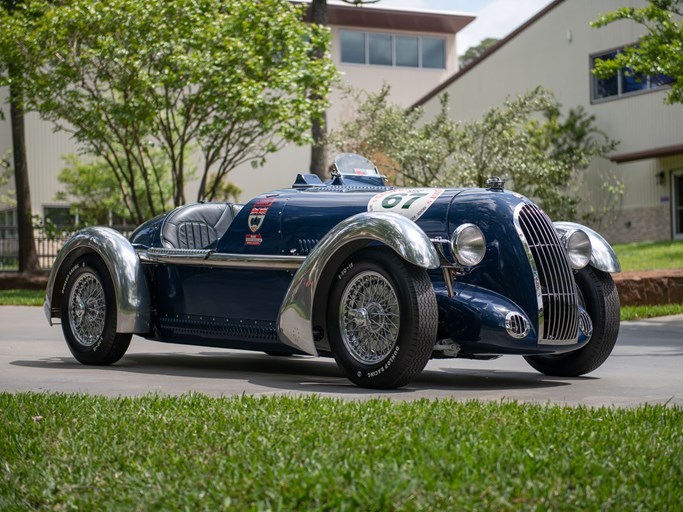