This one-of-a-kind Ferrari F12berlinetta "Tour de France 1964" was commissioned by Francorchamps Motors Brussels and was built by Ferrari’s exclusive Personalization Programme Tailor Made at the Maranello factory and finished production in December 2014.

In 1964 the Ferrari 250 GTO, #172, driven by Lucien Bianchi and Georges Berger won the legendary Tour de France Automobile. An endurance event spanning across France, their 250 GTO would cover 6,000 kilometres, take part in nine hill climbs and race for 10½ hours at every famous circuit in France. This astounding achievement and the iconic silver paintwork and yellow stripe livery of the Bianchi/Berger 250 GTO is paid a special tribute to in the colour scheme of this F12berlinetta.

The "TdF 64" is finished in the historic colour scheme of Argento Auteil, with a contrasting GialloArgento Auteil body colour with matching accents in Giallo. This F12berlinetta left the factory with two sets of fully electric seats and retains both sets; the first upholstered in Heritage Mahagoni leather, and the second set, which is currently fitted, trimmed in Ferrari’s Blue Historic Fabric a nod to the original seats fitted in the Bianchi/Berger 250 GTO.

Under the bonnet lies Ferrari’s 740-bhp, 6.3-litre naturally aspirated V-12 engine, capable of reaching 100 km/h in as little as 3.1 seconds and topping out with a max speed of 340 km/h. Mated to the engine is a seven-speed dual-clutch semi-automatic gearbox. This breath-taking powertrain coupled with an aluminium spaceframe chassis and ceramic brakes means power, handling and overall performance exceeds that of the F12’s predecessors and makes for a fantastic driving experience.

Upon its completion in late 2014, the "TdF 64" made its international debut in front of the world’s motoring press in January 2015. In February, the car was displayed by Ferrari at the Geneva Motor Show. Since then, Ferrari has invited this example to various prestigious events such as: Tour de France Auto in 2015, Targa Florio Classica in 2015, and the Chantilly Arts & Elegance in 2015 and again in 2016.

This Ferrari was delivered new to the original owner in Luxembourg by Francorchamps Motors, the "TdF 64" has covered a mere 15,048 km in his ownership. This F12berlinetta is in "like-new" condition, bar a few minute stone-chips and a small scrape under the passenger side of the front bumper. The car was last serviced on 11 September 2020, in keeping with the Ferrari service schedule. Presented with the F12 "TdF 64" is the original documentation, the Ferrari invoice, a Ferrari EC Certificate of Conformity, and a Certificate of Authenticity signed by Sergio Marchionne, the former CEO of Ferrari SpA. 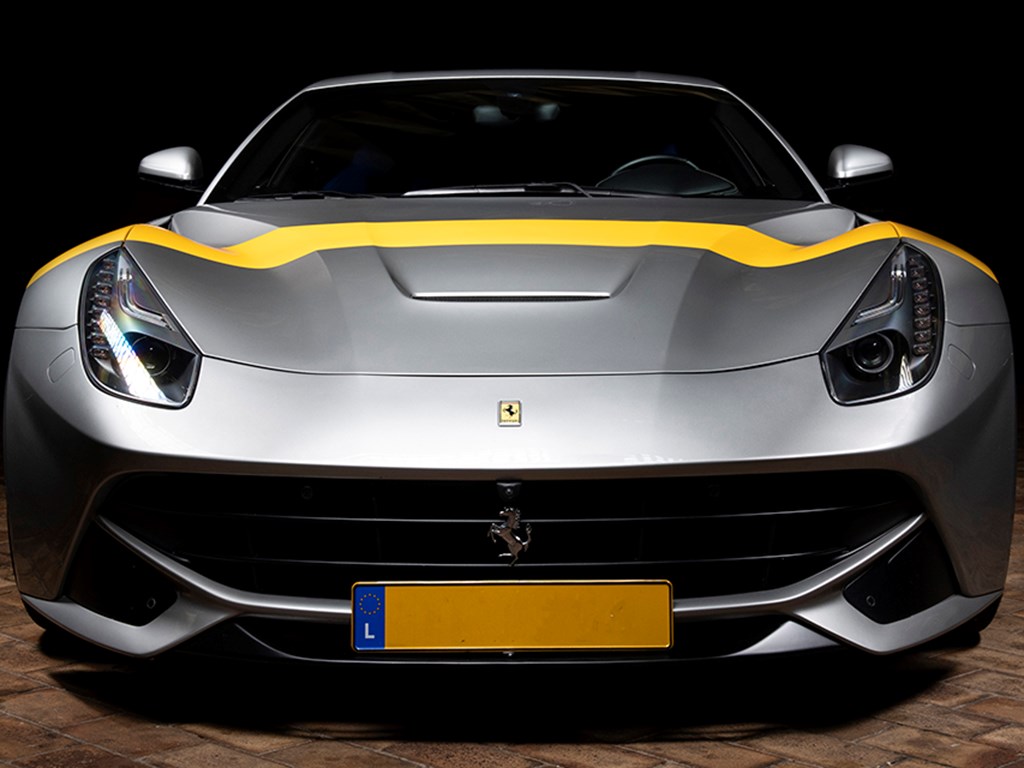 Fully customized from the headliner material to the high-visibility hood stripe, this grand touring Ferrari is certified authentic.