The 100 M “Le Mans” was introduced in 1955 as a higher-performance version of the Austin-Healey BN2, featuring larger carburetors and a high-lift camshaft, as well as high-compression pistons and a number of other upgrades that increased engine output from 90 to 110 horsepower. It was also equipped with an upgraded anti-roll bar and a louvered bonnet secured by leather straps. While some BN2s were retrofitted with performance parts to obtain 100 M-like performance, only 640 examples of the 100 M were produced by the factory in 1955 and 1956, making them among the most sought-after of British sports cars by collectors and enthusiasts today.

This 1956 Austin-Healey 100 M “Le Mans” is a factory-built model that was completed on 12 April 1956 and delivered new to the United States. A comprehensive restoration is said to have been performed in 1997 by Spyder Autowerks of Fresno, California, that included refinishing the exterior in its original color combination of Healey Blue and Ivory White. The factory 2,660cc inline-four was also replaced with a different 100 M engine that was reportedly sourced from another 100 M (note that, at this time the tag bearing the original engine number was affixed to the replacement engine) , and the electrical system was converted to 12-volt.

Some of the notable features on this authentic 100 M include a beautiful wood-rimmed Moto-Lita steering wheel with a factory-style horn button and turn signal switch, Smiths instrumentation comprising a 120-mph speedometer and 6,000-rpm tachometer, as well as gauges for water temperature, oil pressure, and fuel level. Additional features include a rake-adjustable windshield, chrome emergency brake and passenger grab handles, and a fire extinguisher. 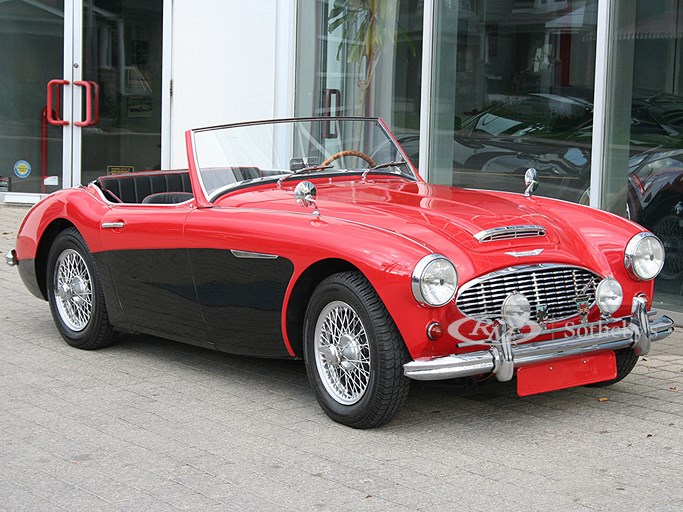