Many cars are described as the “ultimate,” but few can credibly claim to be literally that – this 2019 Porsche 911 Speedster is the final example of the 991 generation ever to enter and pass down the serial production line at the Stuttgart-Zuffenhausen factory. Its VIN is therefore the final one assigned and beyond this distinction, this 911 Speedster is one of a limited run of just 1,948 ever built.

In many ways, this car marks a milestone in the continuous evolution that began over 70 years prior, when Porsche’s first 356 “No. 1” was officially registered in Austria. Porsche has re-released the Speedster several times since its debut in 1954, and the shortened, steeply raked windshield, folding fabric top and spartan interior have appeared in every era since. For the 991, Porsche took the Speedster’s signature twin streamliners and translated them into the modern age, with a contemporary design constructed from a carbon fiber composite. Both the front and rear fasciae are made of lightweight polyurethane. As with the Porsche 911 R, the Speedster’s front fenders and hood are fashioned out of carbon fiber composite, but the sculpted rear lid is unique to the Speedster. The rear lid is molded from a single component, increasing its structural rigidity, and it holds the record for the largest body panel Porsche has built out of the lightweight material.

Underneath the skin, the Speedster’s suspension is based on the celebrated setup from the Porsche 911 GT3, with the same active suspension management system with model-specific calibrations for more pleasurable cruising. The suspension is constantly monitored and adjusted by the Porsche Active Suspension Management system, which can electronically adjust the Speedster’s dampers quickly to help ensure an optimal ride on any road surface. Nimble handling is achieved through the standard rear-axle steering system, also shared with the other cars in Porsche’s 911 GT model line, though the system has been specifically tuned for the Speedster. The standard Porsche Ceramic Composite Brakes give the Speedster equal stopping power to the 911 GT3, but for each car specified with a Heritage Design Package, the calipers are all painted high-gloss black with white ‘PORSCHE’ logos.

A special option on the limited-edition Speedster, Heritage Design was an aesthetic package with details evoking highlights from the brand’s motorsport history. The unmistakable livery was designed to echo factory-built competition 356 racers, while the underlying Silver Metallic paint color harkens back to a time when all cars appeared in that same elemental shade. The classic sans-serif ‘PORSCHE’ graphic spans from wheel to wheel on each side, noticeably curving outward at the rear to accommodate the wide rear wheel arches. The 20-inch satin platinum wheels with black center locking hubs are also race-inspired and are exclusive to the Heritage Design Speedster, presenting a perfect blend of practicality and style.

Like any true Speedster, this example features a custom windshield, which has been shortened compared to its cabriolet sibling, its angle made more acute for a rakish appearance and to bring the driver even closer to the road. On either side of the twin streamliners, two special milled and gold-plated badges reading “Speedster” are affixed. The designers at Porsche were especially proud of the meticulous craftsmanship that went into this all-new logotype, from the font selection to the materials used, the effect is reminiscent of the badging on the original 356 A Speedster. As in the original, the gold-plated badging extends to the interior, with a subtle “Speedster” on the dashboard trim strip.

Two interior color schemes were available – a race-inspired, all-black interior with red accents on the standard 911 Speedster, or this gorgeous two-tone, heritage-inspired interior specific to the Heritage Design Package, with a practical black dashboard and gauges to help minimize reflections, GT silver interior trim matching the exterior color to contrast the gold “Speedster” badge, and full bucket sport seats with natural Cognac-colored leather over a base made of carbon fiber composite, the perfect blend of old-world luxury and modern materials.

And should it start raining, the Speedster’s occupants can seek quick shelter – underneath the rear lid, Porsche fitted a black fabric roof for inclement weather. Because of the lightweight construction, unfolding the fabric roof is a relatively easy task that can be accomplished by one person. The press of a button unlocks the rear lid, which hinges out of the way of the manually operated roof. A single fluid motion brings the roof to the windshield, and another button press activates a power latch to lock the two together. The final step is to close the rear lid and snap the roof’s fabric buttresses to the chrome fittings on the twin streamliners. Bridging the two streamliners is a third brake light, unique to the Speedster. One final secret hides beneath the rear lid – the streamliners conceal a supplemental roll-over protection system that can detect an accident and deploy weight-supporting safety bars in a fraction of a second to protect the passenger cabin.

In another nod back to Speedster heritage, this example is equipped with a fire extinguisher, mounted in the passenger footwell. Other options include auto-dimming mirrors with an integrated rain-sensor and LED headlights in black with Porsche’s Dynamic Light System, which incorporates both steering angle and current speed and swivels the front lights to better illuminate the road ahead. Long journeys are made easier in this example, as the optional 23.7-gallon Extended Range Fuel Tank was fitted. An optional front axle lift kit was also specified, making commutes with multiple speed bumps a bit more painless. The most significant option fitted to this example is the automatic climate control system with air-conditioning.

Perhaps the two most celebrated of the Speedster’s features both came as standard – the manual transmission; its gear lever showing the six-speed shift pattern in Cognac, linked to the naturally aspirated 4.0-liter horizontally opposed six-cylinder engine. The pairing of a high-revving motor and short-shifting gearbox offers Speedster owners the maximum in driver engagement, especially when considering the transmission and powerplant in question come from Porsche’s renowned GT line. Andreas Preuninger and Porsche’s GT division tuned their already potent GT engine to produce even more power in the Speedster by using high pressure fuel injectors and individual throttle valves which are unique to this model, generating 502 horsepower in total.

Two unique accessories also accompany the Speedster. The first matches the characteristic design features and materials of the sports car – a spectacular 911 Speedster Heritage Design timepiece by Porsche Design, with a flyback chronograph function for logging repeated lap times or recording multiple acceleration tests. The watch is powered by the first, independently developed Porsche Design Caliber WERK 01.200, with a winding rotor shaped to match the design of the 911 Speedster wheel. Celebrating both the longtime heritage of the Speedster and the longtime collaboration between Porsche AG and Porsche Design, the COSC-certified Speedster timepiece features almost too many history-inspired details to mention. Most importantly, and a unique touch for this occasion, the timepiece has been engraved with a portion of the Speedster’s chassis number; its integrated strap is made of the exact same soft, durable Cognac leather that lines the Speedster’s interior.

Because this Speedster represents the final 991-generation 911 to enter and pass down the serial production line at the Stuttgart-Zuffenhausen factory, Porsche had a photographer document the build process as this example was assembled in Weissach, Germany in December 2019. The last time that Porsche commissioned such a project was when their 1,000,000th 911 was built. The finished large-format, hardcover book has been bound in the same Cognac leather as the Speedster. Only one copy will be published. According to Porsche, the volume charts “the progress of the car as well as reproductions of the press release issued at the time of and the resulting press coverage associated with the car.” An original pencil sketch, hand-drawn by the design team who made the Speedster, accompanies the book. For a thrilling conclusion – the one-of-a-kind book will be signed by both Dr. Frank-Steffen Walliser and Andreas Preuninger after a behind-the-scenes tour of Porsche AG’s vehicle testing facility and track, which is offered to the winning bidder.

For the ultimate 991, nothing less will do than the ultimate package for any Porsche enthusiast: The capstone on 70 years of Porsche excellence; a highly-optioned, limited-edition example showing less than 30 miles from new, and an exclusive glimpse at the place where Porsche expertise and engineering combine to make legendary automobiles.

SUMMARY OF LOT OFFERING IN ADDITION TO MOTOR CAR:

1. A framed letter of authenticity signed by Dr. Frank-Steffen Walliser and Andreas Preuninger.

2. A Porsche Design Chronograph 911 Speedster Heritage Design timepiece inscribed with a portion of the chassis number of the final 911.

3. A unique leather-bound book containing images of the 911 Speedster as it was being built, press clippings from the time of its announcement, as well as an original sketch by the design team responsible for the car.

4. An invitation to be guest of honor at the proposed handover of the car at The Quail, Monterey Car Week (Friday, 14 August 2020) where Klaus Zellmer, President and CEO of Porsche Cars North America will conduct proceedings. The invitation is for two adults and comprises business class flights within the US, Porsche shuttle transfers, and hotel accommodation, including breakfast and evening meals, for three nights during Monterey Car Week. Please note that should Monterey Car Week not occur due to COVID-19, the winning bidder can choose to receive the car either at Porsche’s headquarters in Atlanta or its home in Los Angeles (Porsche Experience Center) at a mutually convenient time. Tickets to the 2021 Monterey Car Week would be provided as well.

5. An invitation for two guests to travel to Weissach, near Stuttgart, Germany at a mutually agreed point as honored guests of Porsche AG where they will receive a guided tour of the site in the company of Dr. Frank-Steffen Walliser (Vice President, 718 & 911 model lines) and Andreas Preuninger (Director, GT model lines). Included is a visit to Porsche Motorsport, to the GT car development building and to the test track, with the opportunity to receive a passenger experience with Andreas Preuninger before finishing with a visit to the Porsche design department. Please note that no cameras or recording devices are authorized on-site, invitation is for two people; one business class flight for two within Europe, along with Porsche shuttles and two nights of accommodation, including meals, being provided. 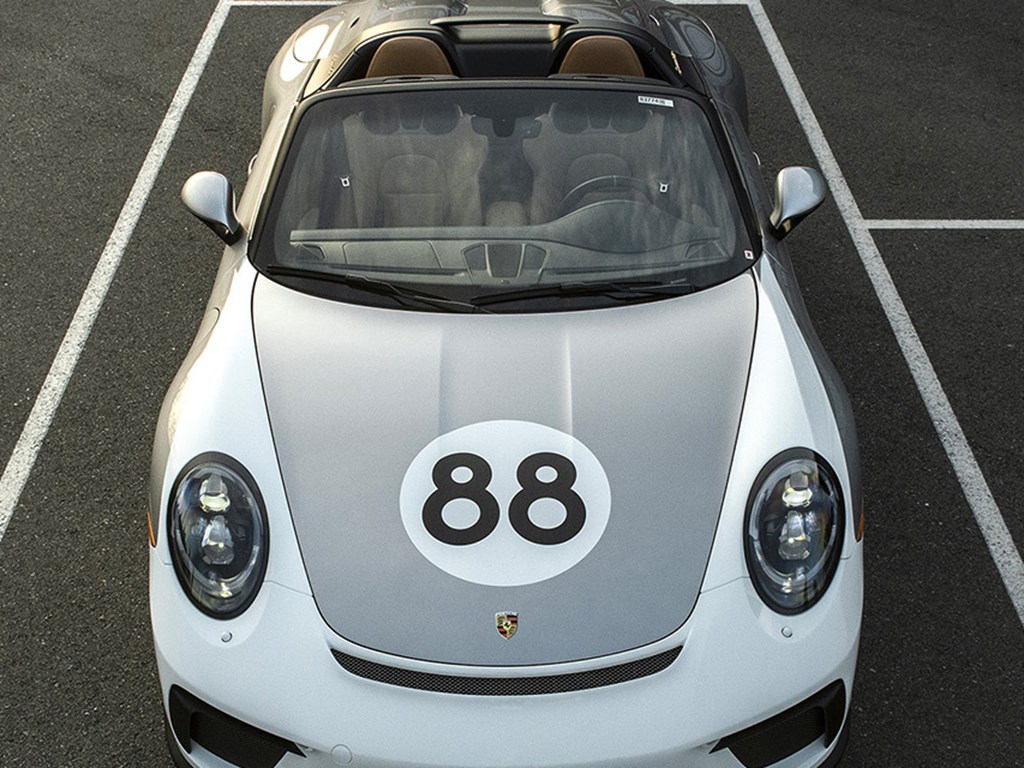 As the Final 991 Chassis to Enter and Leave Production, This Porsche 911 Speedster Shows 70 Years of Design Heritage and Engineering Refinement.