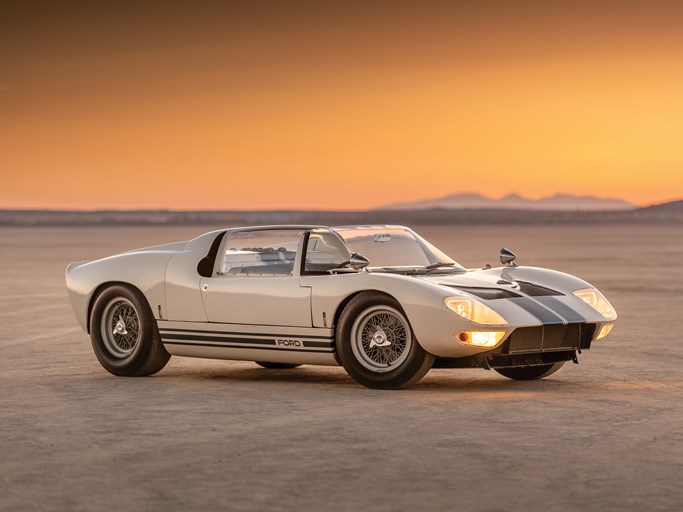 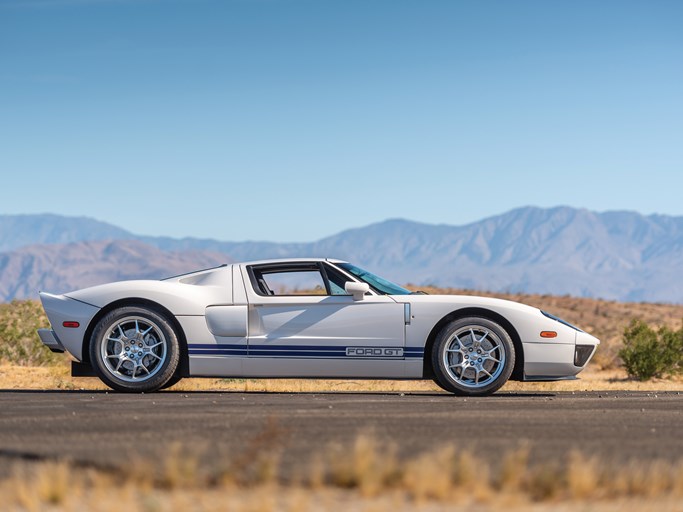 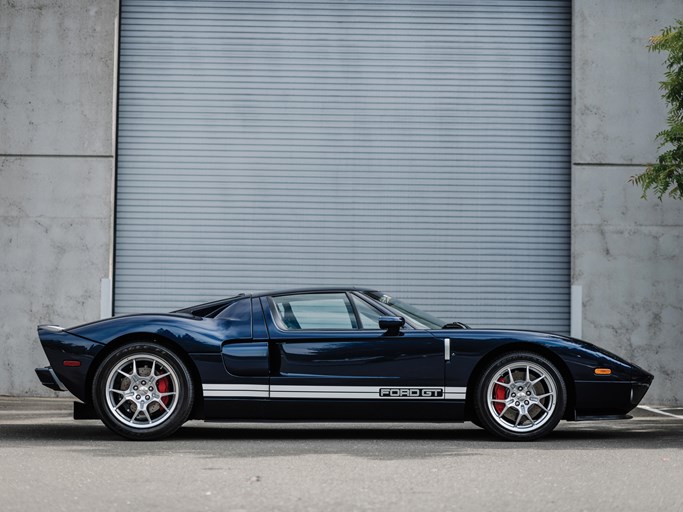 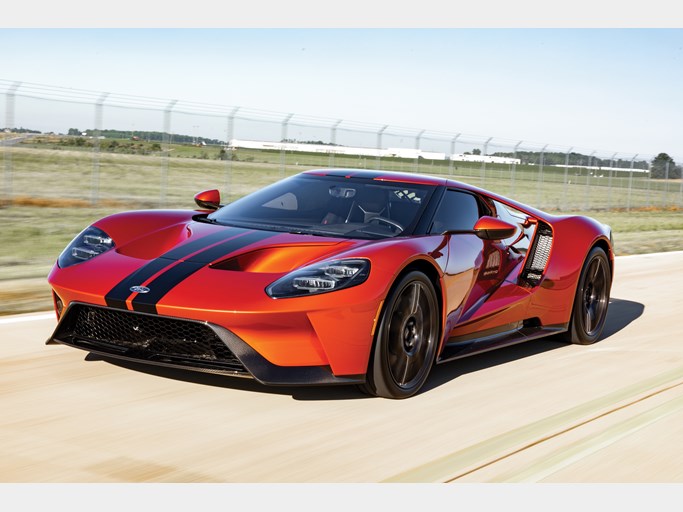 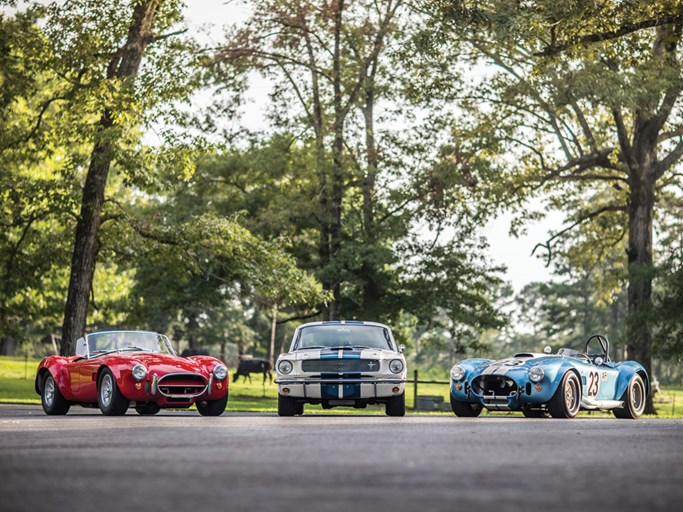 JOINED BY TRIO OF SHELBYS FROM THE FONVIELLE COLLECTION

BLENHEIM, Ontario (16 July 2019) – RM Sotheby’s has assembled the complete lineage of the Ford GT model for its Monterey, California sale, set for 15-17 August at the Monterey Conference Center.

Leading the pack is the forefather of “the pace car for an entire company”, a 1965 Ford GT40 Roadster Prototype, chassis no. GT/108, influential in the development of Detroit’s first purpose-built prototype-class race car, which famously went on to win the 24 Hours of Le Mans for four consecutive years. The eighth of 12 GT40 prototypes built and the first of a mere five roadsters, this is the only example of its kind to have continually survived in its original form.

Built for Shelby American as a test and development car, GT/108 is one of two cars also used by Kar Kraft for “J” and “X” Series development. Driven by the likes of such legendary drivers as Carroll Shelby, Ken Miles, and Jim Clark, this is one of the finest, most original, and rarest examples of Ford’s racing icon. Well cared for and displayed at some of the hobby’s top events throughout its recent life, the GT40 Roadster would surely crown any sports and racing collection as an historic component of the GT40 legend (Est. $7,000,000 - $9,000,000).

Fast forward 40 years down the road and Ford celebrated the company’s 100th anniversary with the release of the retro-inspired Ford GT, which remains an exciting performance car in high demand to this day. On offer without reserve in Monterey are a pair of low-mileage, well-cared-for GT examples, including a 1,300-mile 2005 Ford GT finished in Centennial White and fully equipped with all four factory options, including blue racing stripes, grey-painted brake calipers, attractive lightweight forged BBS wheels, and the upgraded McIntosh sound system (Est. $275,000 - $325,000, without reserve). A rare Midnight Blue 2005 Ford GT completes the pair, also featuring all four available options and carefully driven less than 100 miles since it rolled off the assembly line (Est. $300,000 - $350,000, without reserve).

Completing the lineage to date is a 2017 Ford GT, the only example finished in striking Beryllium Orange. This particular car was one of the first allocated and features a host of bespoke options, including carbon-fiber wheels. Today this Ford GT is offered in virtually as-new condition, with less than 400 original miles and without encumbrance. With the initial allocation process being extremely selective, this is a rare opportunity for enthusiasts of modern supercars or American motorsport to acquire a must-have model (Est. $1,200,000 - $1,500,000).

Adding some fun for the next generation of enthusiasts to the lineup is a Ford Mini GT40 by SCAF. An authentic Mini GT40 built in France, this example was recently comprehensively restored and would make for a wonderful conversation piece or, for the adventurous driver aged 7-12, a thrilling ride at the Little Big Mans race held at Le Mans Classic (Est. $25,000 - $35,000, without reserve).

“It’s hugely significant for us to offer this group of cars all together in Monterey,” said Gord Duff, Global Head of Auctions, RM Sotheby’s. “We’ve had the honor of presenting incredible Fords and Shelbys at the auction in past years, including the very first Cobra and the Le Mans GT40 just last year, and now we can tell the full story of Ford’s legendary racing history with this group. All three models are desirable to today’s American or motorsport collectors, and they will complement each other come sale day.”

Adding to the Americana offering at RM Sotheby’s Monterey sale are a trio of cars offered from The Fonvielle Collection. A passionate enthusiast with a keen eye for detail, David Fonvielle is a long-time collector and Cobra fanatic. As a young man, Fonvielle was sitting at a red light in his Pontiac GTO when a Shelby 427 Cobra pulled up alongside him. He was immediately enamored with the side pipes, roll bar, and incredible exhaust note, and vowed that he would one day own a 427 Cobra. He made it happen, several times over.

Now offered from more than a decade of ownership in the Fonvielle Collection are three immaculate Shelby examples, restored not only to near cosmetic perfection but also completely dialed-in from a performance perspective. Leading the collection is a 1966 Shelby 427 Cobra. Chassis no. CSX 3237 comes to Monterey equipped with a host of upgrades including the big-block side-oiler 427 cubic inch V-8 engine, hood scoop, quick jacks, black side pipes, and custom roll bar. Finished in its original red and fully restored to factory specifications by Cobra specialists, this performance-car icon checks all the right boxes (Est. $1,100,000 - $1,250,000).

Joining the 1966 and making for the ultimate pair is a 1965 Shelby 427 Cobra, built to SCCA A-Production specifications when new and campaigned at regional races during the 1966 and 1967 seasons. Following the end of its period racing career, CSX 3125 was fully restored by a well-known Cobra specialist to as-raced specifications. It comes to auction in supremely authentic condition and would certainly stand out in any collection of sports racers as a car that was used and enjoyed just as its namesake intended (Est. $1,250,000-$1,500,000). Rounding out the group is a 1966 Shelby GT350, chassis no. SFM 6S180, a sought-after “carry-over” car delivered in October 1965 and wearing early features seen on the 1965 model year. The car is now fully restored and upgraded for touring, with numerous mechanical components replaced to add greater performance and reliability. Cared for in the Fonvielle Collection for the last decade, this GT350 comes to Monterey retaining all its original body panels and ready to be enjoyed (Est. $275,000-$325,000).

The Ford GT lineup and Fonvielle Collection join an already superb group of cars for RM Sotheby’s Monterey sale, which has been the pinnacle of collector car auctions for more than 30 years, leading the field and raising the bar with its consistent, record-setting results. This year’s three-day Monterey sale will once again present more than 180 of the world’s most important motor cars in the ultimate collector car destination. For further information on the Monterey auction and to view a frequently updated list of entries, please visit rmsothebys.com. The complete digital catalogue is coming soon.