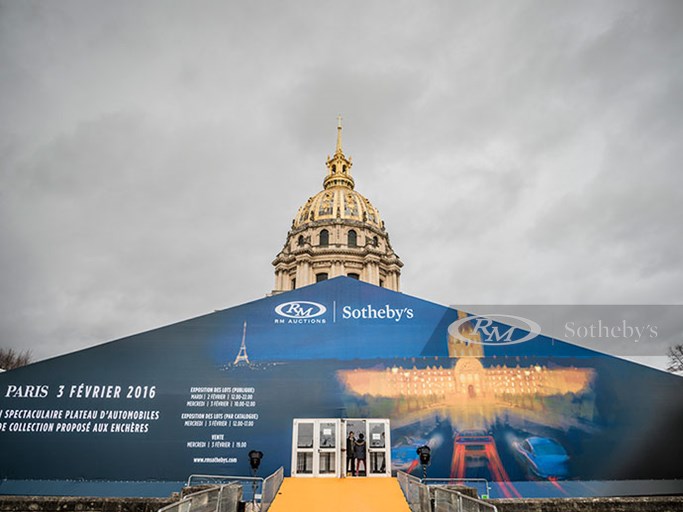 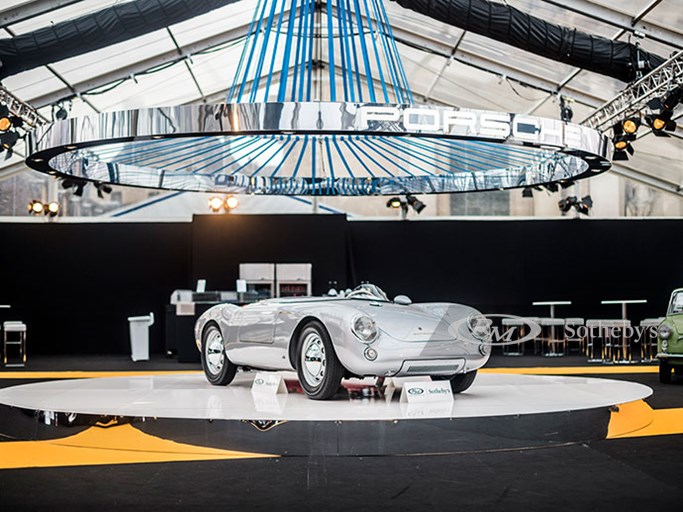 PARIS (4 February, 2016) – RM Sotheby’s, the world’s largest collector car auction house for investment-quality automobiles, returned to Place Vauban last night for its third annual Paris sale. A highlight of the world-famous Rétromobile week, the auction achieved €19,035,550* ($20,843,927 US) before a standing-room-only crowd. With active bidding from global collectors representing 24 countries, the result was a successful sell-through of 79 percent. One of the highlights of the evening sale was the 1955 Porsche 550 Spyder, which realized a strong €2.744.000. In total, seven automobiles achieved individual million-euro-plus results.

The Porsche 550 Spyder was undoubtedly the star of the auction preview, with enthusiasts flocking to Place Vauban to glimpse the rare competition sports racing car. The featured example was significant for being the 1955 Frankfurt Motor Show car and one of just 75 factory-built ‘customer’ 550 Spyders, with period U.S. racing history that includes 3rd in class at the 1956 Sebring 12 Hours. Supremely eligible for vintage tours, rallies and racing, it represented a rare and highly coveted prize for collectors, and deserved excellent price it achieved on the night.

Max Girardo, Managing Director of RM Sotheby’s Europe said: “We had some great lots on offer in Paris and the Porsche 550 Spyder, in particular, represented everything that we wish to bring to market. It’s a car with great history, rarity and huge desirability; it simply ticks all the boxes.”

Beyond the Porsche 550 Spyder, the German marques did well in Paris, proving that Italian exotics don’t always dominate the market. Another highlight was the beautiful 1957 BMW 507 Roadster Series II. Only 252 examples of this rakish German V8 powered sports car were made, so it was not a surprise to see it sell for a very strong €2.016.000. The 1955 Mercedes-Benz 300 SL Gullwing, presented beautifully in its wonderful white paintwork, is another true German icon of the classic car world. Offered in outstanding restored condition, it sold for a well-deserved €1.176.000 before the packed auction room.  The other star lot of the sale, the beautiful 1962 Ferrari 400 Superamerica LWB, which came very close to its reserve price during the auction, was sold immediately after the sale for a final €2.950.000.

Additional highlights of the evening included the 2004 Ferrari Enzo, one of the newest cars in the sale and certainly one of the greatest of all the modern hypercars to emerge in recent years, which made €1.568.000, while the 1992 Lancia Delta HF Integrale Evo 1 ‘Martini 6’, which attracted much pre-sale interest, sold for €134.400—a world-record price for the model at public auction.

Following a busy start to the 2016 season, which has included successful performances at both Arizona and Paris during the past five days, RM Sotheby’s is now looking ahead to its annual Amelia Island Concours d’Elegance sale, March 12 in Florida.  The company’s next European auction—it’s exclusive, biennial Monaco sale—is scheduled for 14 May during the Grand Prix Historique de Monaco weekend. Quickly becoming one of Europe’s leading collector car auctions, RM’s last Monaco performance (2014) generated more than €41 million. Early highlights for this year’s event include a 1951 Ferrari 340 America Barchetta and the 1984 Peugeot 205 T16, both of which are currently on view at RM’s Retromobilé stand (S037) through 7 February.

*Results are listed in Euros and include 12 percent buyer’s premium for automobiles and 17 percent on all other lots. Sale totals include post-sale transactions. Exchange rate used: €1 = $1.095 USD, £0.765 GBP

RM Sotheby’s (formerly RM Auctions) is the world's largest auction house for investment-quality automobiles. With 35 years’ experience in the collector car industry, RM's vertically integrated range of services, from private treaty sales and auctions to estate planning, and financial services, coupled with an expert team of car specialists and an international footprint, provide an unsurpassed level of service to the global collector car market. As a company, RM Sotheby’s has established numerous auction benchmarks, including the current record for the highest-grossing collector car auction of all time, with $172.9 million in sales at its 2015 Monterey event.   In February 2015, RM formed a strategic partnership with Sotheby’s, uniting the two companies for the full calendar of future automobile auctions. For further information, visit   www.rmsothebys.com .