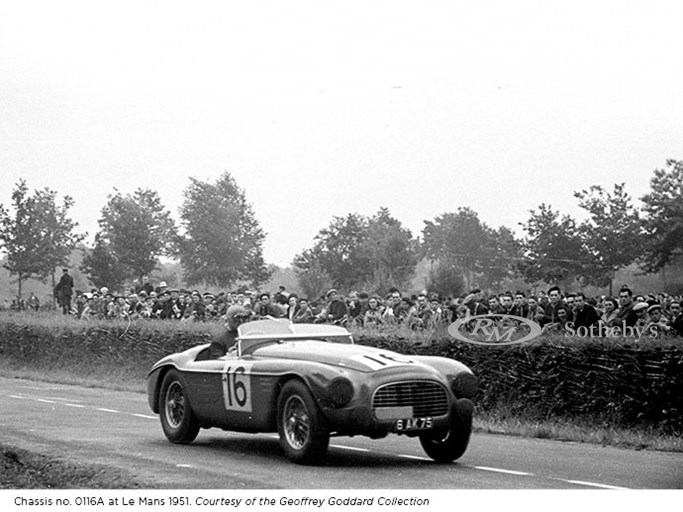 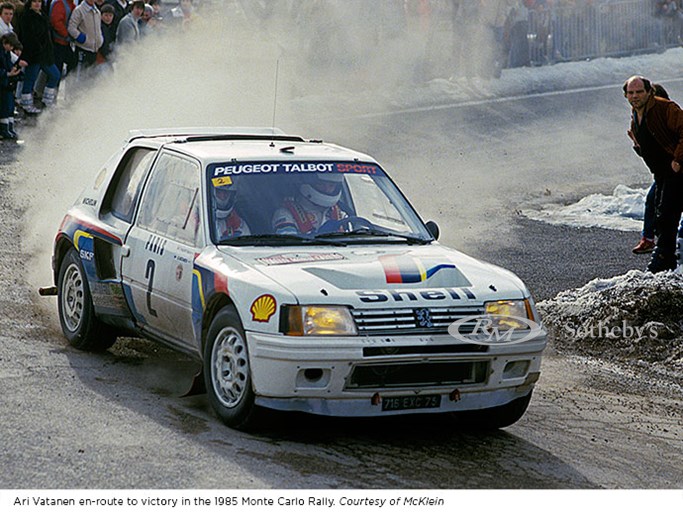 PARIS (2 February, 2016) – RM’s Sotheby’s is proud to announce the addition of the 1951 Ferrari 340 America Touring Barchetta, chassis no. 0116/A, to its upcoming Monaco sale, returning 14 May during the Grand Prix de Monaco Historique weekend. Steeped in motorsport and racing provenance, the one-of-eight, Touring-bodied 340 America retains its original engine and is recognised as one of the first big block V-12 racing Ferraris.

Chassis no. 0116/A was sold new in 1951 to Pierre Louis-Dreyfus, a noted World War II hero and successful businessman, who immediately entered it in the Le Mans 24 Hours, where it was run by Ferrari’s North American Racing Team founder and successful racer, Luigi Chinetti. Driven by Dreyfus and the legendary Louis Chiron, the car enjoyed a race duel with another 340 that so engrossed Chiron that he missed his pit window and 25-lap signal. The car ran dry on circuit and was rescued by the team’s mechanic who illegally refueled the car, causing them to be black-flagged and disqualified. 0116/A returned to Le Mans a year later with Chinetti, Louis-Dreyfus and a new team-mate Rene Dreyfus, and fought valiantly but retired with a clutch issue in the fifth hour of the race. Throughout the years, it has passed through the hands of a number of respected collectors, including Pierre Bardinon, who have enjoyed the car in numerous historic race meetings such as the Mille Miglia, as well as showcasing it at a number of concours d’elegance events. It comes to auction eligible for almost any international event (Estimate available upon request).

Joining the Ferrari at RM Sotheby’s prestigious Monaco sale will be a World Rally Championship (WRC) and Group B icon. Driven by Ari Vatanen, the featured 1984 Peugeot 205 Turbo 16 Evolution 1 Group B is one of the most iconic and successful Group B rally cars of its era. Winning both the 1985 Monte Carlo and Swedish rally, chassis no. C11 was one of just three Works cars entered into the WRC by Peugeot Talbot Sport, from a total of 20 Works Evolution 1 rally cars ever made; its two victories helped propel Peugeot to claim the world championship that year. Vatanen also used the car to recce the Tour de Corse and Acropolis rallies later in the year, before its final outing with Bruno Saby at the Sanremo rally. It is offered in Monaco having had just two previous private owners, and boasting an outstanding provenance, heritage and status (Est. €600.000 – €800.000).

Both the 340 America and the Peugeot 205 T16 will be on preview at RM Sotheby’s stand (S037) at Retromobile in Paris from today through 7 February. The Retromobile week also marks the official start of RM Sotheby’s 2016 European calendar, with the company’s Paris sale taking place tomorrow, 3 February at Place Vauban in the city’s center.

Scheduled for later in the year, RM Sotheby’s exclusive biennial Monaco event is becoming one of Europe’s leading collector car auctions; its one-day event in 2014 yielded over €41 million in sales. This year’s Monaco auction is set to build on these impressive results, lifting the gavel on approximately 100 blue-chip collector cars.  For further sale information, or to discuss consignment opportunities, please visit www.rmsothebys.com or call RM’s London office at +44 (0) 20 7851 7070..