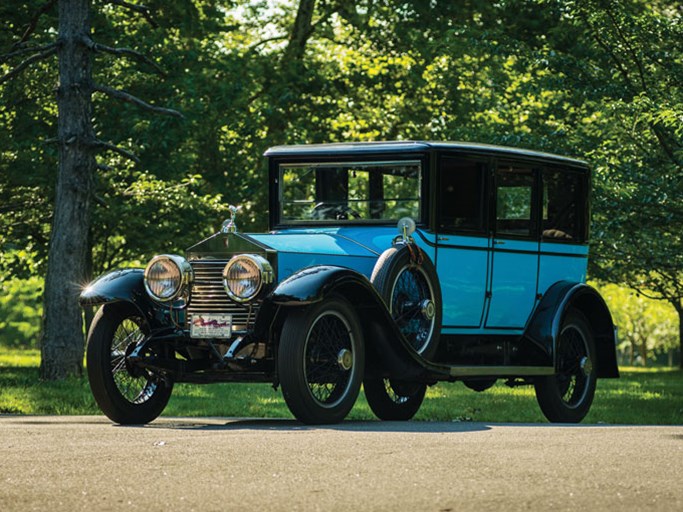 The well-documented Rolls-Royce is one of the 1703 Silver Ghosts built at the Springfield, Massachusetts factory between 1921 and 1926, and was originally owned by Frederick Alton Powers and wife, Virginia Hewes Powers of Houlton, Maine. Mr. Powers served on the Supreme Judicial Court of the State of Maine, as well as in the House of Representatives, the Senate, and as Attorney General for two terms. Following his passing in 1924, the car made its way into the hands of owners in Massachusetts and Vermont, before landing with Adrian West and Kate Hutchens of Pennsylvania, who shipped it to Scotland to participate in the Scottish and Alpine tours. Back on American soil, the Silver Ghost was then passed to respected marque mechanic Frank Cooke, who rebuilt the motor and owned the Rolls-Royce until his death. In recent years, Cars for Films acquired the car and it played a starring role as the main automotive presence in the Golden Globe and Emmy-winning television series “Boardwalk Empire”. In this Prohibition Era drama, the car was utilized by the main character, corrupt Atlantic City politician Enoch “Nuckey” Thompson, portrayed by celebrated actor Steve Buscemi.  A true symbol of success and luxury at the time, the Rolls-Royce’s formal design is highlighted by its distinctive two-tone paint, roll-up divider window, Waltham gauges, rear jump seats, and beautiful accessories presented in nickel, copper and brass.

The screen-worthy Silver Ghost joins a diverse roster of 1200 classics, muscle cars, hot rods, exotics, and more expected to cross the block during this month’s multi-day auction in the Classic Car Capital of America. As part of the company’s commitment to giving back to the local community, the sale also features a 1964 Chevrolet Impala Convertible offered by founder of the Auburn-based Rathburn Tool & Manufacturing and Vietnam veteran, Jerry Rathburn. All proceeds from the Impala’s sale will benefit the Honor Flight of Northeast Indiana, a nonprofit organization created solely to honor America’s veterans for all their sacrifices by flying them to Washington, DC to reflect at their memorials.

“Auburn Fall marks a special time of year for Auctions America,” says Donnie Gould, president of the company. “As a highlight of the famous Auburn Cord Duesenberg Festival, the diverse selection of auction vehicles, celebrity sightings, and thrilling activities bring collectors and their entire families home to the Classic Car Capital of America for the ultimate celebration of the collector car hobby. We’re excited to see more and more enthusiasts make Auburn Fall their Labor Day tradition every year”.

Providing something for all automotive tastes and budgets, the automobile lineup at Auburn Fall will be joined by a selection of classic automotive parts from The MacPhail Collection, The Fred Smith Automotive Fine Art Collection, and The Maggio Mascot Collection, along with a private collection of 26 antique tractors.

Beyond the dual-ring auction action, car corral and swap meet, this year’s Auburn Fall event also features numerous celebrity appearances and thrill-seeking automotive activities. Visitors to this year’s event will have the chance to meet: Frank Fritz, star of the History Channel’s “American Pickers”; Courtney Hansen, star of the new automotive programming block “PowerNation” on NBCSN, CBS Sports and Spike TV; and Rick and Kelly Dale, stars of the History Channel’s hit series “American Restoration”, who will all be available for meet and greet and autograph sessions across the weekend. In addition, the Auburn Auction Park will also play host to interactive and high-flying freestyle ATV and dirt bike shows, monster truck shows and rides, and provide sky high views of all the Auburn excitement via onsite helicopter rides, providing fun for the whole family. Complete dates and times for celebrity appearances and autograph sessions, along with ancillary events are available at auctionsamerica.com.

For those unable to be part of the fun, NBCSN (NBC Sports Network) will once again put the Labor Day tradition on a national stage, bringing four days of select Auburn Fall highlights to more than 80 million homes across the U.S., including over six hours of live, gavel-to-gavel action. A full coverage schedule is available here: http://www.auctionsamerica.com/NBCSports.

For further information on Auburn Fall or to view the digital catalog please contact an Auctions America car specialist toll free at 877-906-2437 (+1 260-927-9797 outside of North America) or visit auctionsamerica.com.