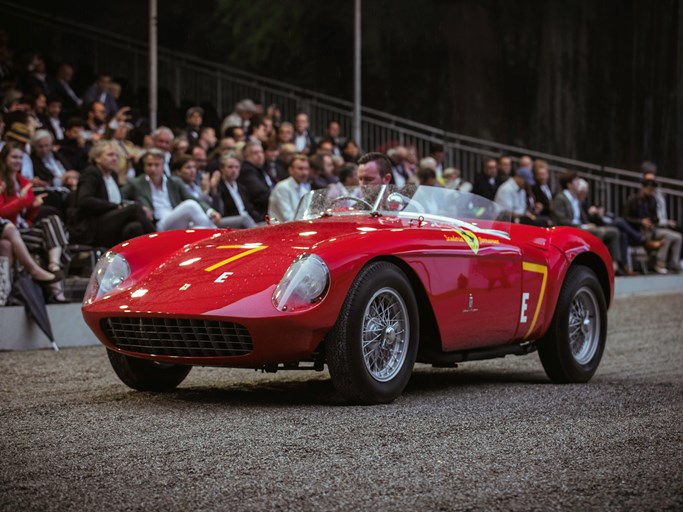 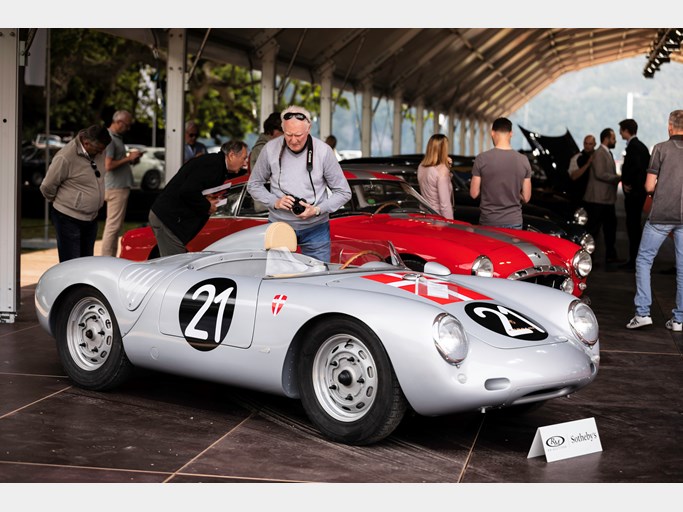 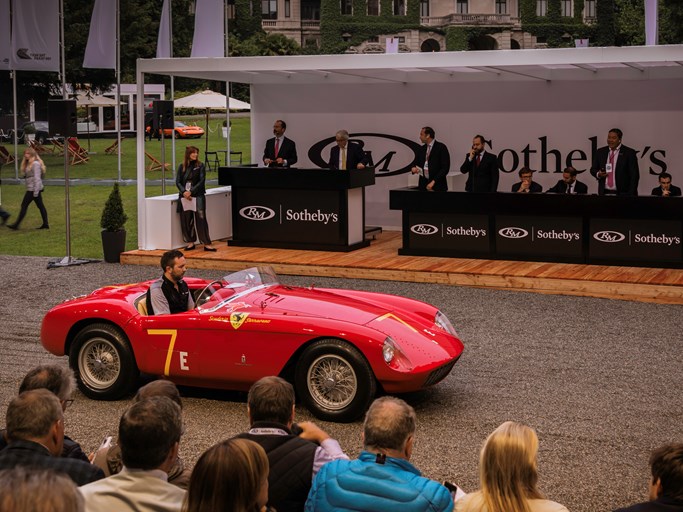 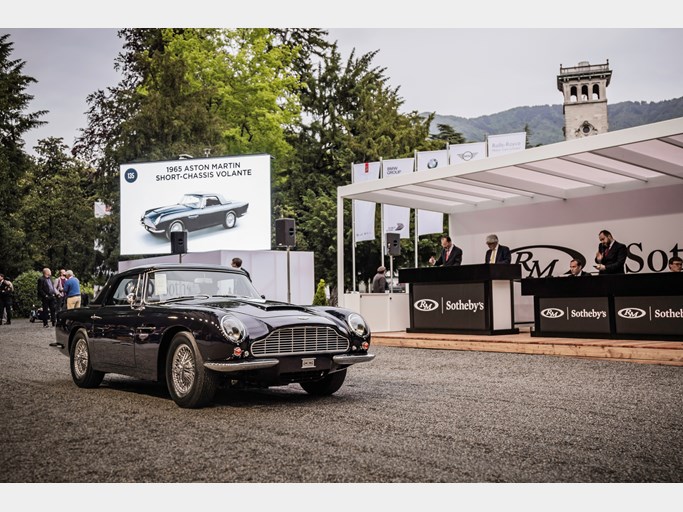 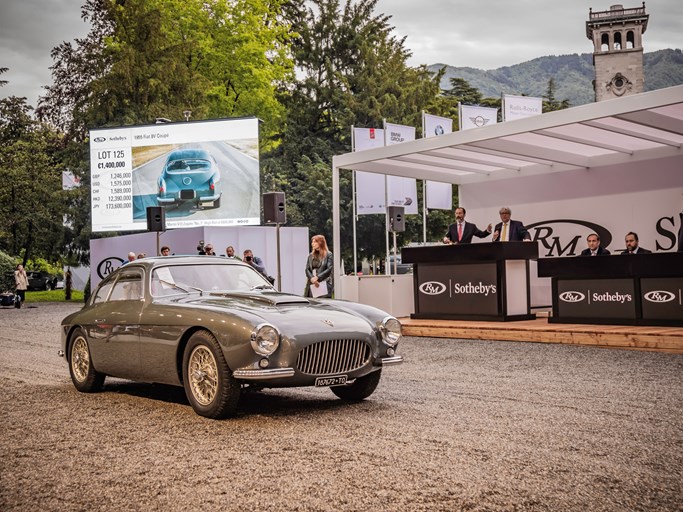 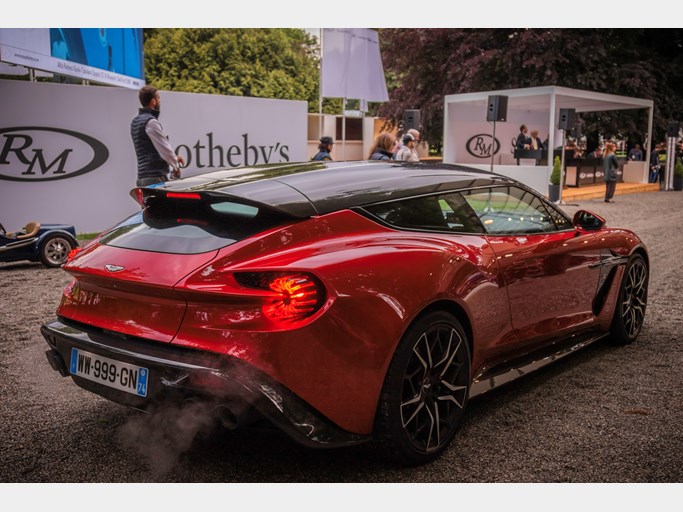 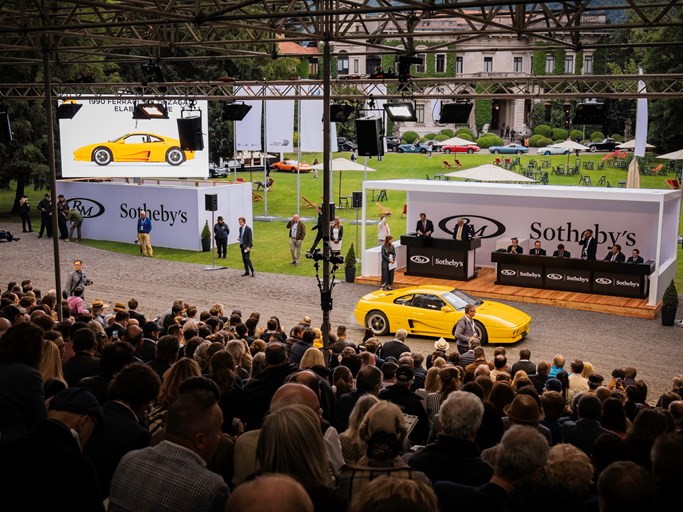 LAKE COMO, Italy (27 May 2019) – RM Sotheby’s, the official auction house of the esteemed Concorso d’Eleganza Villa d’Este, concluded its fifth, successful Villa Erba sale on the shores of Lake Como, Italy, grossing an impressive €19,798,085 and with five cars achieving figures in excess of €1,000,000. Bidders at the exclusive event represented no less than 30 countries, with more than 25 percent being first-time RM Sotheby’s clientele.

Pre-sale, it was two incredible sports racing machines from the 1950s which had garnered significant attention, and on the night it was the same two cars which stole the show. The top seller was the original, matching-numbers 1954 Ferrari 500 Mondial Spider, chassis no. 0448 MD, the 12th of just 13 Pinin Farina Spiders built. The car boasts extensive period racing history and is an exceptionally eligible car for historic racing and concours events. Fully restored and Ferrari Classiche certified, the car was deservedly bought for €3,717,500.

No car exemplifies the appeal of a 1950s sports racing car more than a 1957 Porsche 550A Spyder, providing exceptional usability and ultimate eligibility for historic events. The car sold at Villa Erba is one of only 40 cars made and benefits from a well-known and highly documented history. Chassis no. 550A-0121 was first delivered to Denmark in 1957 and enjoyed competition history there as well as in Africa where it went on to be sold. The car has undergone a complete, body-off restoration by leading Porsche specialists and has only covered 100km on the road since returning from the workshop. This wonderful piece of Porsche history achieved €3,380,000.

1960s Aston Martins are always desirable and none more so than the rare 1965 Aston Martin Short-Chassis Volante, which is one of the final examples of a mere 37 built. Offered after a period of long-term ownership and beautifully restored in Switzerland by renowned experts, the car is matching numbers and features a rare and desirable hardtop. It fully deserved to be the night’s third highest seller, achieving an impressive €1,805,000. The sale was notable for featuring an incredible collection of rare Zagato-bodied cars in celebration of the coachbuilder’s 100th anniversary, and leading the group was a stunning 1955 Fiat 8V Coupé by Zagato, a car highly coveted by collectors. The car sold, chassis no. 000076, is one of 26 coupes built, and brought a worthy €1,771,250.

Augustin Sabatié-Garat, Car Specialist and the Villa Erba Auction Manager, RM Sotheby’s, says: “To achieve nearly €20 million in gross sales is a great result, and it’s testament to the high-quality cars that were on offer at Villa Erba. We have once again demonstrated that the best 1950s sports racing cars with strong provenance remain the most highly prized collector cars in this hobby-driven market, while cars such as the Aston Martin Volante and Fiat 8V Coupe demonstrate how the appeal of timeless design and low production numbers are key factors in driving demand among enthusiasts and collectors.”

It was the absolutely stunning 1931 Bugatti Type 50 Roadster that rounded out the top five sellers on the night. This incredible supercharged, eight-cylinder engined touring car, is one of two remaining examples with original Jean Bugatti-designed factory coachwork and was offered in beautiful restored condition. With factory records including the original bill of sale, this pre-war great achieved €1,411,250.

The RM Sotheby’s Group continues its 2019 auction calendar in Auburn, Indiana, USA, 29 May-1 June, where more than 300 collector cars and hundreds of lots of memorabilia are on offer. Further information on upcoming events, along with complete results from RM Sotheby’s 2019 Villa Erba sale, can be found at rmsothebys.com.