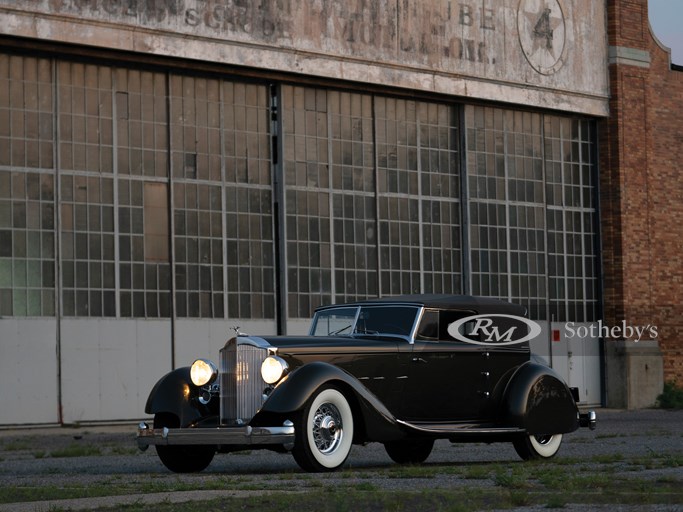 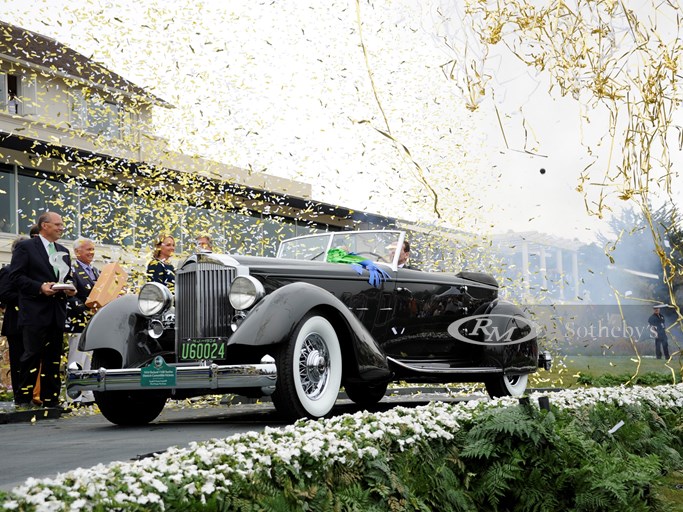 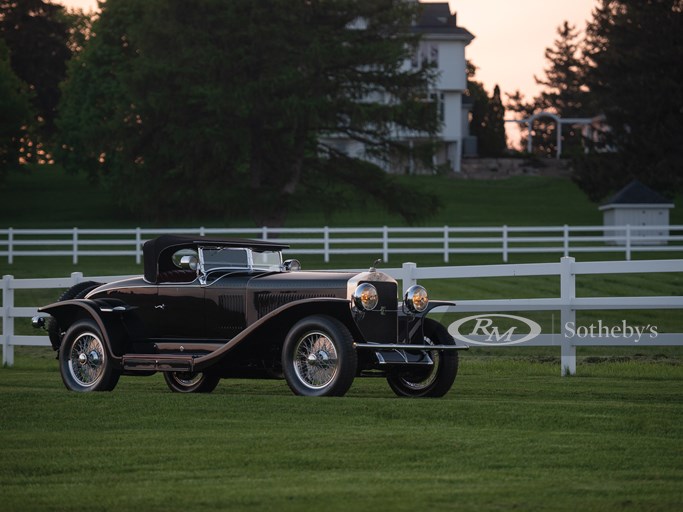 BLENHEIM, Ontario (5 June 2018) – RM Sotheby’s is honored to announce the return of two Pebble Beach award-winning motor cars to the Monterey Peninsula for the company’s flagship sale at the Monterey Conference Center, 24-25 August. Offered from the esteemed collection of Judge Joseph and Margie Cassini, the 2013 Pebble Beach Best of Show-winning 1934 Packard Twelve Individual Custom Convertible Victoria by Dietrich is inarguably the world’s most beautiful example and is now available to a new home.

The 1934 Packard Twelve Individual Custom Convertible Victoria on offer, vehicle no. 1108-65, is one of four extant Dietrich Individual Custom Convertible Victoria examples on the ultimate Packard chassis of the Classic Era, the Eleventh Series Twelve of 1934. The car bears all the typical spectacular Dietrich design cues, with one unique addition in the remarkably curvaceous fenders. The dramatic tapered fenders, with full “skirts” over the rear wheels and streamlined running boards, are known to have been installed on only two cars, this convertible victoria and a phaeton.

The Packard is believed to have been part of the marque’s “Traveling Salon,” a group of special show cars that made appearances in numerous locales between Detroit and New York. At the end of its tour, the car was acquired by Ricardo LaCosta II, a prominent attorney and future judge from a well-known Puerto Rican family. Following LaCosta’s passing, the car was sold and served as a taxi cab in Puerto Rico, eventually making it back to the U.S. in the early 1960s. The Packard would spend time in the collections of two noted restorers, who began work on the car, before it was sold in 2012 to Joseph – himself a New Jersey Superior Court Judge – and Margie Cassini, collectors of many of the greatest known American and European Full Classics. The pair are known to acquire one or two important cars at a time, carefully restoring them to their very best possible condition, and then showing them at the concours events they so enjoy all over the country. They are frequent Best of Show winners for a reason: only perfection is acceptable.

The Cassinis commissioned RM Auto Restoration to complete the Packard’s precise, full restoration. The body is finished in a subtle charcoal hue, with a complementary leather interior in the original Dietrich style. The trim is correct to the car’s surviving period photographs, including the unique dual rear-mounted spares and “bumperettes,” and the car retains much of the original Dietrich body hardware with which it was delivered, as well as its original chassis, engine, and firewall tag.

Following 14,000 hours of craftsmanship, the Packard made its debut at none other than the Pebble Beach Concours d’Elegance, where it landed 1st in Class and the lauded Best of Show, instantly becoming perhaps the world’s best-known Packard. Following this great honor, the car has been selectively exhibited at other prestigious events throughout North America, earning Best in Class and Best of Show at the 2016 Concours d’Elegance of America at St. John’s, and Best in Class at the Amelia Island Concours d’Elegance in the same year. Numerous judging opportunities remain on both sides of the Atlantic for the new owner. Accompanied by tremendous documentation, the Packard would be the sure crown jewel of any collection of great American Classics (Est. $4,500,000 - $6,000,000).

“This Dietrich-bodied Packard Twelve is one of the most important and rarest American Classics to ever come up for sale,” says Gord Duff, Global Head of Auctions, RM Sotheby’s Group. “The one-off fenders give the car a considerably sportier design, clearly pulling inspiration from the Auburn speedster and French coachbuilding of the period. The quality of the restoration is nothing short of over the top, and with known history from new, it simply doesn’t get any better than this. The Dietrich Twelve is among the most significant American Classics, and quite possibly the world’s best Packard.”

From a great American Classic to an exceptional European Classic, RM Sotheby’s will also present the 1927 Isotta Fraschini Tipo 8A S Roadster by Fleetwood from the Cassini Collection at Monterey. The Isotta was originally commissioned by legendary film star, Rudolph Valentino. Known to be an involved owner, Valentino was reportedly personally involved in the car’s design, carried out by LeBaron of New York City, with the actual body construction handed over to the Fleetwood Metal Body Company, also of New York.

With its long, flared open fenders and low-slung lines, accentuated by classic “long hood/short deck” proportions, it was a showstopper deserving of a Hollywood icon. Unfortunately, Valentino passed suddenly at the age of 31, and would never have a chance to drive the car. His roadster was completed and debuted at the 1926 New York Auto Salon at the Commodore Hotel and then put on display in the front window of Isotta Motors, to be admired by throngs of Valentino’s adoring, mourning fans.

The car was eventually sold and gifted to American socialite Peggy Hopkins Joyce. The Isotta would go on to be a part of several important American collections before it was purchased by the Cassinis in 2001, who soon commissioned RM Auto Restoration to restore every nut and bolt to authentic, original condition. Completed in 2003, the restoration earned the car several significant awards, including Best of Show at the Meadowbrook, Greenwich, Lehigh, and St. Michael’s Concours d’Elegance, the Elegance at Hershey, and of course, Best in Class at Pebble Beach.

This would not be the car’s only appearance on the Peninsula. Following additional careful research by RM Auto Restoration and RM Sotheby’s, a correct pleated interior and a proper top in the original design and material were installed and the car returned to the Pebble Beach Concours in 2017 as part of a featured class of Isotta Fraschinis. A testament to the Cassinis’ superb care and the workmanship involved, the car was awarded Best in Class again, a remarkable achievement for any important automobile. The most iconic and significant surviving Isotta Fraschini, it is estimated to bring $1,500,000 - $2,000,000 when it crosses the Monterey podium.

Held during the world-famous Pebble Beach Concours d’Elegance motoring week, RM Sotheby’s Monterey sale has been the pinnacle of collector car auctions for more than 30 years, leading the field and raising the bar with its consistent, record-setting results. This year’s Monterey sale is set at the newly reopened Monterey Conference Center following its $60-million-dollar renovation, offering collectors a stunning new experience and a beautiful space for the display and offering of 120 of the world’s most important motor cars in the ultimate collector car destination.

As RM Sotheby’s prepare to return to the newly-renovated Monterey Conference Center for the company’s flagship sale, take a look back at exceptional cars sold and auction records shattered over the years at Monterey—the pinnacle of collector car auctions, in this brief video. For further event information and an updated list of entries for the Monterey sale, please visit rmsothebys.com. To speak with an RM Sotheby’s car specialist about entering an exceptional car in the auction, please call +1 519 352 4575.