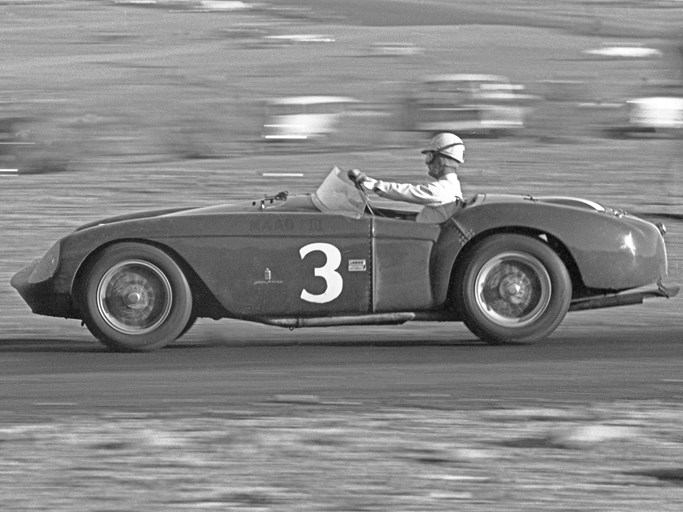 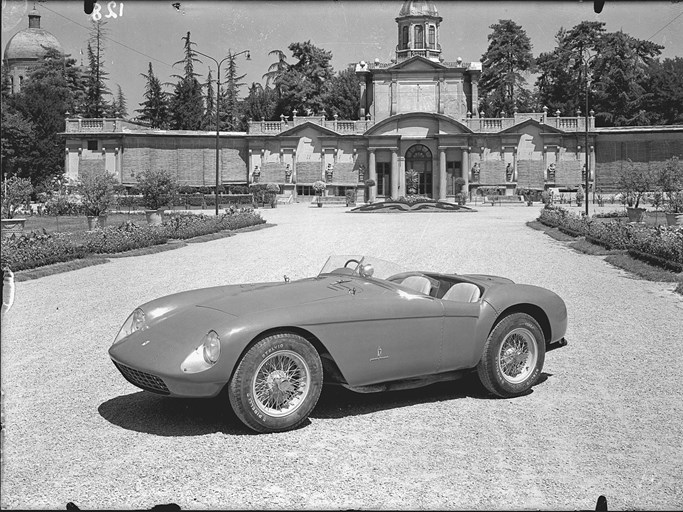 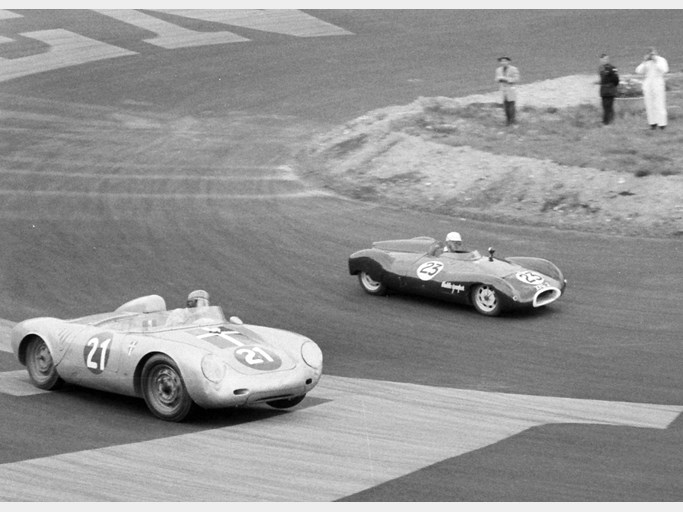 Julius Voigt-Neilsen in 550A-0121 chases Ian Raby in his Cooper Climax at Roskilde, Denmark in September of 1957. 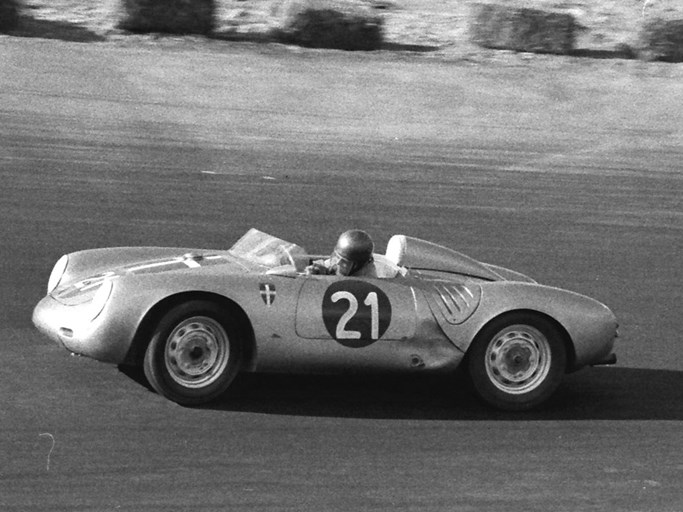 Chassis number 550A-0121 as seen at Roskilde at the Midsummer Races in Roskilde, Denmark in June of 1957.

LONDON (10 April 2019) – RM Sotheby’s is delighted to announce the addition of two important sports racing cars ahead of the company’s highly anticipated biennial Villa Erba sale, due to take place on 25 May during the revered Concorso d’Eleganza Villa d’Este weekend. At the auction on the shores of Lake Como, an original, matching-numbers 1954 Ferrari 500 Mondial Spider will join a 1957 Porsche 550A Spyder, one of 40 cars made by the German marque exclusively for racing and with a documented global competition history.

The 500 Mondial – chassis no. 0448 MD – was completed by the factory in October of 1954, the 12th of only 13 Pinin Farina Spiders built and one of only five with covered headlights, placing it in the first series of cars. It was sold new to Anthony “Tony” Parravano of Inglewood, California. Parravano quickly made himself known as an entrant of numerous exotic Italian sports cars in Californian racing circles. In February 1955, at Willow Springs, it placed 4th overall and 1st in class with Bob Drake at the wheel. In March of 1956, at the same venue, 0448 MD was driven to a 3rd place finish by Pat O’Connor.

The car has been lovingly owned by a number of North American collectors and has enjoyed periods of long-term ownership, although it has seldom been seen since leaving the race track in the late 1950s, making it highly eligible for historic racing and concours events. More recently, the car has returned home to Maranello, where it was inspected by Ferrari Classiche and granted red-book certification. Furthermore, the car’s certification binder confirms that it retains its original engine, gearbox, and bodywork, truly affirming its status as one of the finest 500 Mondials in existence. The car is estimated to achieve between €4.250.000 to €4.750.000 at auction next month.

With an equally impressive racing pedigree, the 1957 Porsche 550A Spyder is offered at Villa Erba with a fascinating ownership and competition history, having been entered in events all over the world. Chassis no. 550A-0121 was first delivered to Denmark in 1957 and would become the only 550A Spyder delivered to that country, where it raced in a number of events before it was sold to an owner in Kenya, where it also ran as a competition car. In the late-1970s, the Porsche was sold to Giuseppe Freschi in Italy, who entered the car into many iterations of the famous Mille Miglia endurance race for classic cars.

In 2011, the Porsche 550A Spyder was sold to its current owner, and the car has undergone a complete, body-off restoration led by Porsche specialists, returning the Spyder to its original configuration and livery. With its recent restoration work, the 550A Spyder is ready for vintage racing or concours events, having only covered 100km on the road since returning from the workshop. This incredibly rare and sought-after Porsche is estimated to achieve between €3.400.000 to €3.800.000 at auction.

Augustin Sabatié-Garat, Auction Manager, RM Sotheby’s Europe, said: “Each of these consignments adds to the high sense of occasion we have come to associate with RM Sotheby’s Villa Erba auction, which always attracts the finest collectible sports and racing automobiles in the world. The rare Ferrari 550 Mondial Spider is fitting of an exclusive bracket of prestige collector car, from its charming condition to its considerable history and recent blessing by Ferrari itself. Similarly, the Porsche 550A Spyder is presented as it would have been delivered new in the 1950s, complete with its reimagined livery that is true to the car’s competition pedigree.”

Ahead of the Villa Erba auction on 25 May, RM Sotheby’s has already consigned a selection of world-class automobiles. A 1931 Aston Martin 1.5-litre International ‘LM5’ was announced along with four Zagato-designed collector cars, including a 1955 Fiat 8V Coupe by Zagato, a 1959 Fiat-Abarth 750 GT ‘Double Bubble’ by Zagato, a 1966 Lancia Flaminia Super Sport 3C 2.8 by Zagato and a 2019 Aston Martin Vanquish Zagato Shooting Brake.

The official auction house of the Concorso d’Eleganza Villa d’Este, RM Sotheby’s exclusive Villa Erba sale will lift the gavel on a carefully curated roster of 40 of the world’s finest automobiles. To speak with a car specialist, please call RM Sotheby’s London office at +44 (0) 20 7851 7070 or visit rmsothebys.com for further information, to view a frequently updated list of entries, and to register to bid.