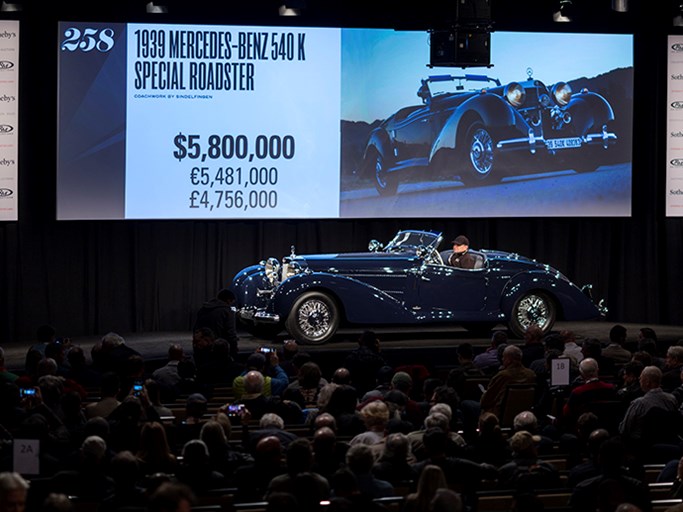 PHOENIX, Arizona (21 January, 2017) – RM Sotheby’s ushered in 2017 with another strong performance in Arizona, generating $53,772,775 in total sales with 89 percent of all lots sold at the Arizona Biltmore. The company’s 18th annual Phoenix sale, held 19-20 January, was a truly global event, attracting bidders from 30 countries—20 percent of which were new RM Sotheby’s clientele—once again illustrating that Arizona is the epicenter of the collector car world in January.

“Our Arizona sale is consistently a bellwether for the collector car market, setting the pace for the auction season to come,” says Ian Kelleher, Managing Director of RM Sotheby’s West Coast Division. “This year’s top ten sales clearly indicate that demand for modern supercars remains strong, while exceptional pre-war classics—such as the 540 K—anchor the strength and resilience of the market. When it comes to specific marques, four decades of Ferrari production were represented in our catalogue, from the 400 Superamerica through to the Enzo, each of which attracted multiple bidders and achieved impressive results – a reflection of their outstanding provenance, restorations and condition. We now turn our attention to Paris, where we’ll open our European calendar next month.”

To cater to the growing appetite for modern high performance motor cars, RM’s Arizona offering had a strong emphasis on vehicles from 1980 and later. As a group, these examples comprised approximately 25 percent of the catalogue. In addition to the F50, leading this segment was Thursday’s headliner, a 2003 Ferrari Enzo, purchased new and offered by renowned designer, Tommy Hilfiger. Fastidiously maintained and driven just 3,620 miles, the 218 mph hypercar roared onto the auction stage before selling for a final $2,695,000. Among other notable modern collectibles, a 2003 Aston Martin DB AR1 Zagato with 800 actual miles exceeded estimate at $379,500; a U.S.-specification 2005 Porsche Carrera GT, showing just 1,132 miles from new, garnered $742,500; and a F22 Raptor-inspired 2008 Lamborghini Reventón, the third of only 20 examples built, realized $1,320,000.

With more than 60 percent of catalogue entries offered without reserve, the Arizona auction catered to a variety of collector tastes and budgets. Additional stand out lots include a much-admired 1965 Jaguar E-Type Series 1 4.2-Litre Roadster, striking in Opalescent Dark Blue, which exceeded pre-sale expectations at $308,000, while a 1938 Mercedes-Benz 200 V Sport Roadster, offered from the Jules Barsotti Collection, far-surpassed its pre-sale estimate of $50,000 - $70,000 at a final $176,000.

RM Sotheby’s focus now turns to France, where the company kicks off its 2017 European calendar with its annual Paris sale, 8 February during the world-famous Rétromobile week. Held at Place Vauban immediately after Festival Automobile International (www.festivaluautomobile.com), this thrilling evening sale will present a curated roster of 78 vehicles, all of which can be viewed in the digital catalogue: http://bit.ly/2j8RyxC.

RM Sotheby’s continues its 2017 North American calendar in Amelia Island, Florida, 10-11 March. The official auction of the Amelia Island Concours d’Elegance, RM’s Ritz-Carlton sale has been extended to two days this year with the addition of A Gentleman’s Collection: The Pride and Passion of Orin Smith. A superlative group of Rolls-Royces, Bentleys and other sporting icons, the Smith collection will be offered  largely without reserve during an exclusive evening sale on 10 March, ahead of RM’s traditional Amelia Island day auction on 11 March.

Further information on upcoming events, along with complete results from RM Sotheby’s Arizona sale, can be found at www.rmsothebys.com.

*Results are listed in USD and inclusive of 10 percent buyer’s premium for automobiles and 15 percent for all other lots. Results tally includes auction and post-auction transactions.