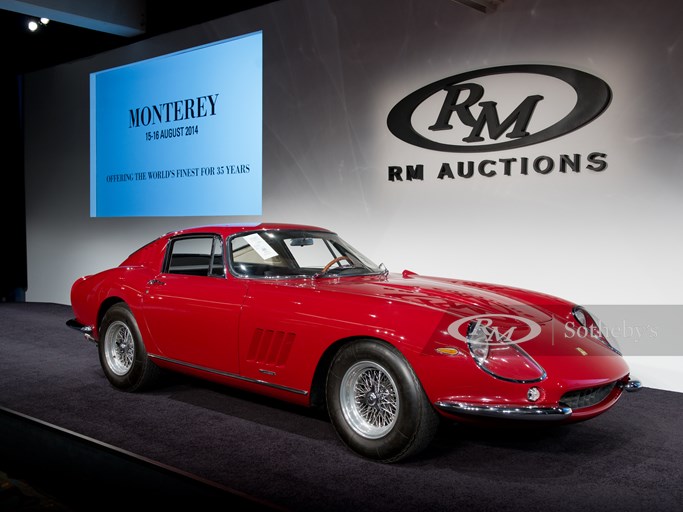 Delivered new to Hollywood and motoring icon Steve McQueen on the set of Bullitt, the 275 GTB/4 spurred a spirited contest between bidders in the room and on the phone, more than tripling the previous auction record for the model (video: http://youtu.be/f2kqcKcRafQ?list=UU).

While the McQueen four-cam lent star power to the RM sale, the true highlight of the night was a 1964 Ferrari 275 GTB/C Speciale, one of just three built. Dubbed the ’65 GTO, the extraordinarily rare Speciale roared onto the auction stage, with bidding opening at $15 million. The final sale price – an outstanding $26,400,000 – cements its place in the pantheon of the most valuable automobiles ever offered at public auction (video: http://youtu.be/t3kJq1WJx1g?list=UUNiTBZZrGcok8fuWlDQ-_yA).

In total, six Ferraris led a string of 21 individual million-dollar-plus sales during the Saturday sale. Among other highlights were the Austie Clark 1911 Mercer Type 35R Raceabout, offered from single-family ownership since 1949, which realized a superb $2,530,000; and a 1971 Lamborghini Miura SV, which sold for $2,090,000.

The RM group of companies rounds out a tremendous week on California’s Monterey Peninsula today (Sunday, August 17) with four motor cars freshly prepared by RM Auto Restoration set for display at the Pebble Beach Concours d’Elegance. In 2013, RM’s restoration division cemented its reputation as the world’s leading restorer of fine automobiles when the 1934 Packard 1108 Twelve Dietrich Convertible Victoria restored by the company was judged Best of Show. The accolade marked the fifth time RM Auto Restoration has been awarded the event’s top honor in the new millennium—an unprecedented achievement.

Complete official results for RM’s Monterey sale will be posted online at www.rmauctions.com early next week.

(All figures are reported in U.S. dollars and include the 10 percent buyer’s premium)