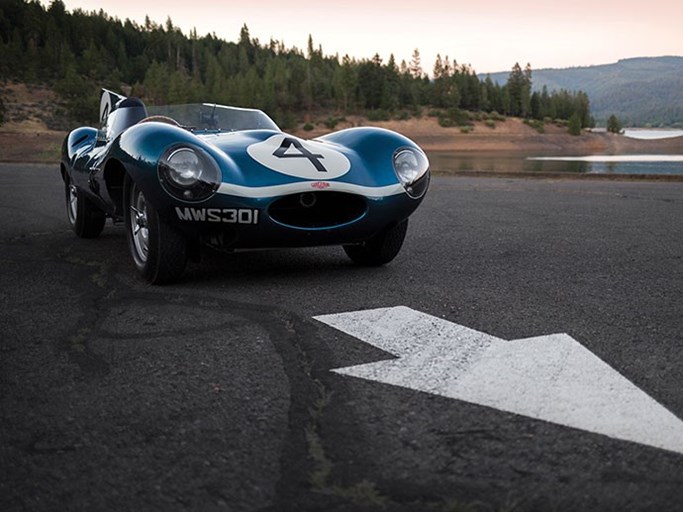 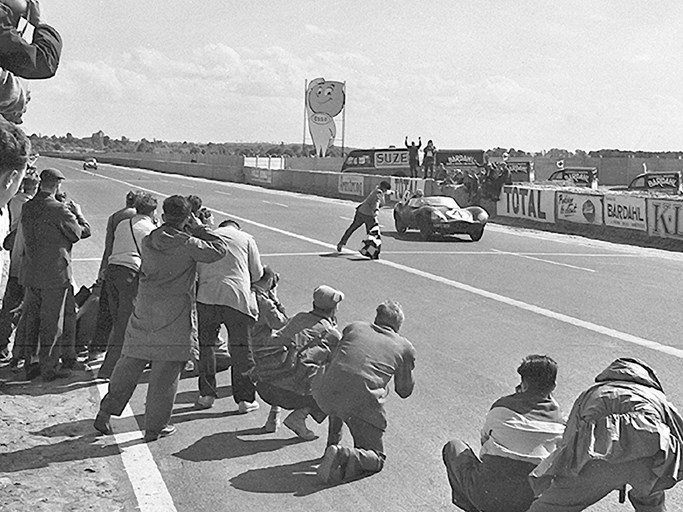 courtesy of the Klemantaski Collection 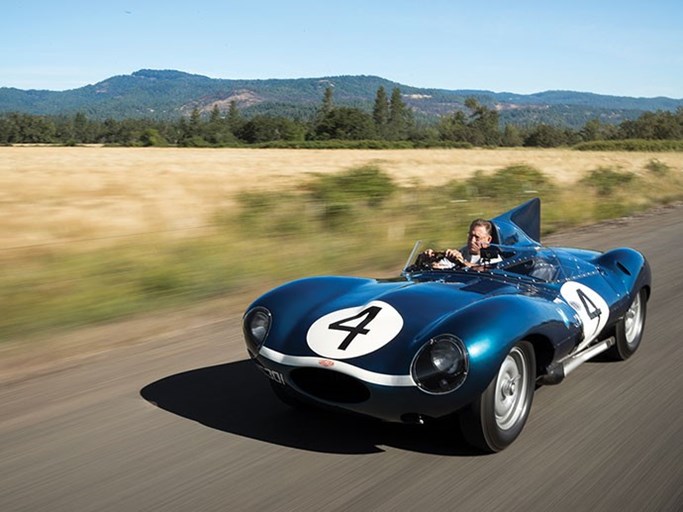 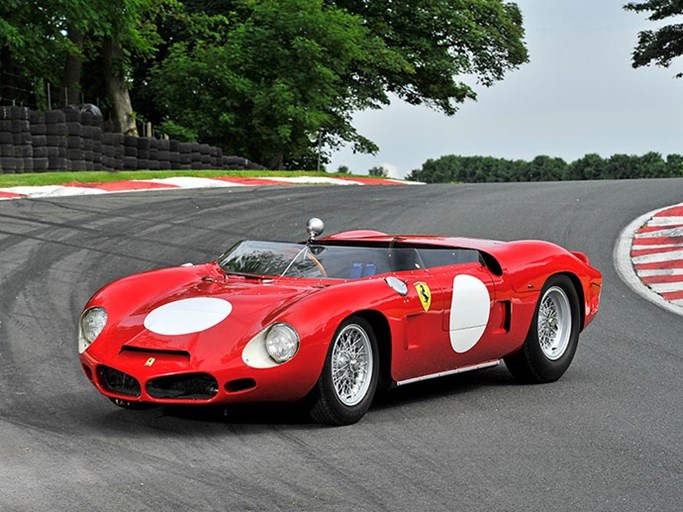 BLENHEIM, Ontario (July 7, 2016) – Offered for public sale for the first time in nearly two decades, RM Sotheby’s has announced that one of the most important and original Jaguar D-Types in existence will headline its flagship Monterey sale, August 19–20 in California. The first D-Type supplied by Jaguar to a privateer team, chassis no. XKD 501 heads to the auction block as a permanent part of Le Mans lore, having claimed the overall victory at the grueling 24-hour race in 1956.

Born to succeed the famous Jaguar C-Type’s dominance at Le Mans in the 1950s, the D-Type had purposeful and beautiful looks, pioneering engineering and outright fire power. In its day, no-one had seen anything like the revolutionary curved body penned by Malcolm Sayer. Not only a thing of beauty, it also was the first to incorporate a unique monocoque construction, combining the body and frame to form structural integrity. Its 3.4-litre engine was rated at 245bhp, propelling the car to a blistering 169 mph at Le Mans during testing.

The immensely significant Jaguar D-Type on offer, chassis no. XKD 501, was sold new to Ecurie Ecosse and dispatched on May 5, 1955; it was easily identified as part of the famed Scottish racing team’s stable by its signature Scottish Flag Metallic Blue livery with the St. Andrews cross emblazoned on the front fenders, a guise it continues to wear to this day. Designed to excel in the crucible of motorsport, the car’s greatest performance was registered at the famed 1956 Le Mans 24 Hours, where, piloted by Ninian Sanderson and Ron Flockhart, it competed alongside three factory longnose cars. By the race’s final lap, only 14 entries remained in the field with the Ecurie Ecosse D-Type going on to claim a comfortable victory, having averaged 104 mph for over 2,500 miles. The car later went on to race at Goodwood, Aintree and the 1957 Mille Miglia, prior to being retired from competition in June that year.

Since retirement, XKD 501 has been in the custodianship of just three private owners and has been meticulously maintained. A part of one of America’s most respected collections since 1999, it has been featured at many of the world’s leading concours events, including the 2002 Pebble Beach Concours d’Elegance, where it won the Jaguar Competition class and the Road & Track award. It returns to the Monterey Peninsula in August – this time to the auction stage – where it is set to comfortably eclipse the current record for a British automobile sold at auction. A vehicle notable for not only its incredible history and rarity, but also its beautifully authentic presentation, its offering presents an exclusive opportunity to not only acquire the most important Jaguar racing car ever made, but an incredible piece of Le Mans heritage.

“XKD 501 is without question one of the world’s most significant competition cars,” comments Shelby Myers, Car Specialist, RM Sotheby’s. “It has an incredible racing pedigree, having won the most grueling contest in sports car racing, the famed 24 Hours of Le Mans, and importantly, is without any stories. What’s more is its amazing originality; pure in terms of body, chassis and engine, there is no other Le Mans winner from this period that is as original as this car.  We are extremely honored to have been entrusted with XKD 501 by its important caretaker for our Monterey sale; it’s a decision that again reaffirms RM as the auction house of choice for the sale of the world’s most important automobiles.”

Another important competition car with Le Mans history and slated for RM Monterey is the 1962 Ferrari 268 SP, chassis no. 0798. Like the D-Type, this Ferrari 268 SP has an enviable and well-documented racing pedigree.

Chassis no. 0798 claims extreme rarity in the Ferrari lineage; it is the third of just six 268 SP examples originally produced, of which only five remain, and one of only two originally fitted with the outstanding 2.6-liter eight-cylinder engine. It is further differentiated from its peers by its unique shark nose along with its cut down windscreen and lowered tail which make for a sleek profile. The car was integral to Ferrari’s testing at Le Mans in 1962, being the factory racing and development car and subsequent Works entry at the 24 Hours of Le Mans that same year. It was later sold to North American Racing Team (NART) owner, Luigi Chinetti, who campaigned it under the NART banner from late–1962 through 1963, including at such events as Bahamas Speed Week, Sebring and the Canadian Grand Prix.

After passing through the hands of various noted collectors, 0798 eventually found its way into Pierre Bardinon’s esteemed Mas du Clos Collection in 1969, where it remained for the next 27 years. Its current gentleman owner has fastidiously maintained the car for nearly two decades, during which time it has been displayed at select major events around the world, including the Goodwood Festival of Speed, Ferrari Days at Spa-Francorchamps, the Cavallino Classic and the Ferrari 60th Anniversary Concours. An exceptional matching-numbers car, it comes to auction with the all-important Ferrari Classiche certification (Estimate available upon request).

“The Ferrari 268 SP is a groundbreaking automobile in every regard,” states Gord Duff, Car Specialist, RM Sotheby’s. “Not only was it rare to start with, but only five examples remain in existence. Its dramatic Fantuzzi spider coachwork represented a complete departure from prior Maranello coachwork and included design cues that became instrumental to seminal Ferrari racers such as the 250 P and 330 P, and even influenced Scaglietti-built berlinettas such as the 250 LM. All this, combined with an exceptional provenance, make it one of the finest and most desirable 1960s Ferrari sports-racers to be offered in many years.”

A tradition spanning more than 30 years, RM Sotheby’s annual Monterey auction, held during the Pebble Beach Concours d’Elegance week, returns to the Portola Hotel & Spa and Monterey Conference Center, August 19-20. In total, some 100 blue-chip automobiles are expected to go under the gavel during the two-evening sale. For further event information and to view a frequently updated list of entries, please visit www.rmsothebys.com or call +1 519 352 4575.

RM Sotheby’s (formerly RM Auctions) is the world's largest auction house for investment-quality automobiles. With 35 years’ experience in the collector car industry, RM's vertically integrated range of services, from private treaty sales and auctions to estate planning, and financial services, coupled with an expert team of car specialists and an international footprint, provide an unsurpassed level of service to the global collector car market. In February 2015, RM formed a strategic partnership with Sotheby’s, uniting the two companies for the full calendar of future automobile auctions. For further information, visit www.rmsothebys.com.

High res images are available for downloading for media use from the RM Sotheby’s website.  If you are interested in attending an RM Sotheby’s event as a member of the media, please visit www.rmsothebys.com/credentials to register for media credentials.