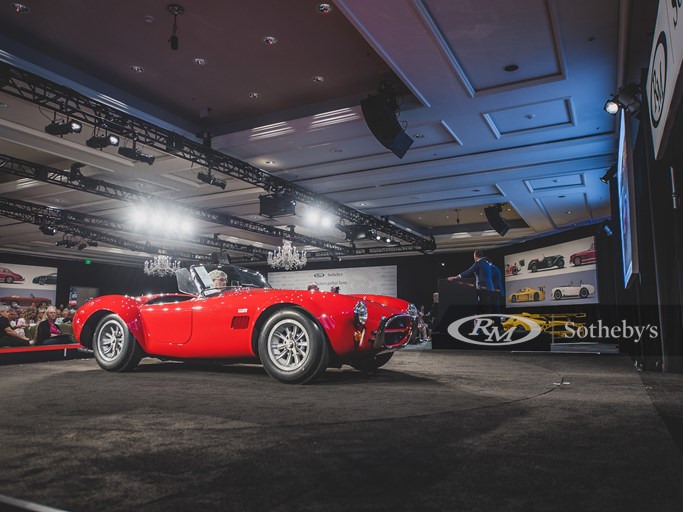 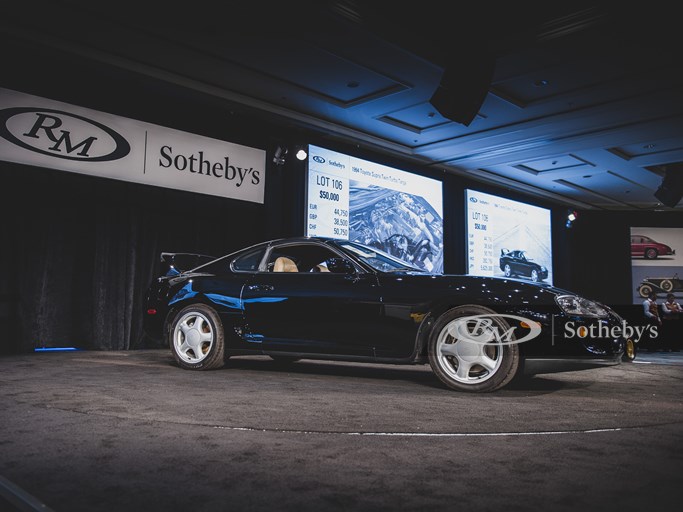 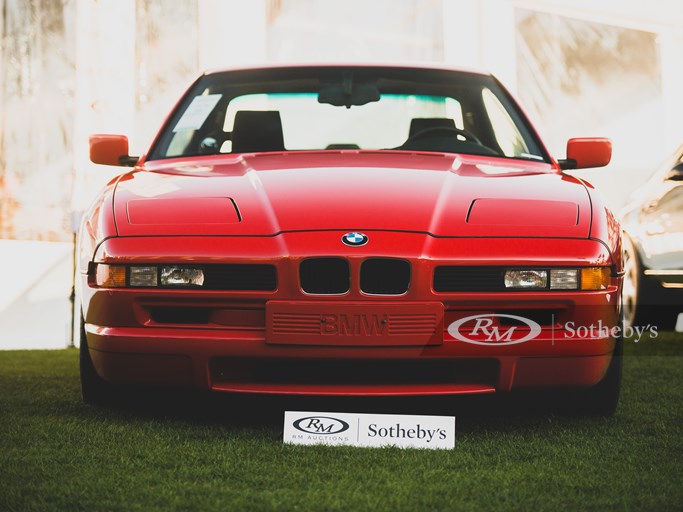 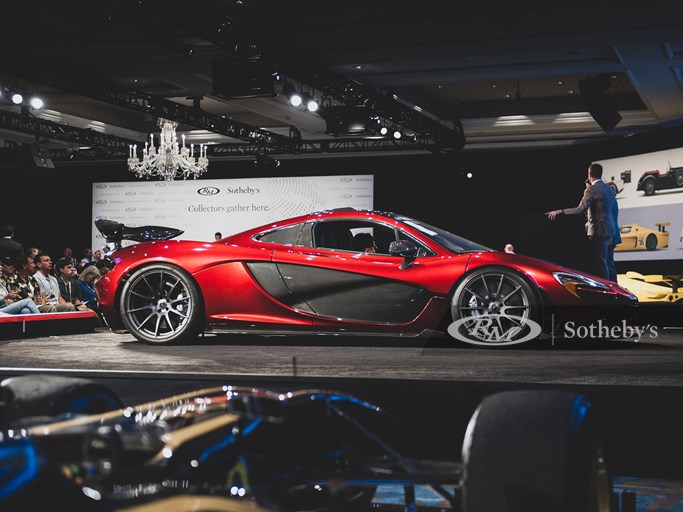 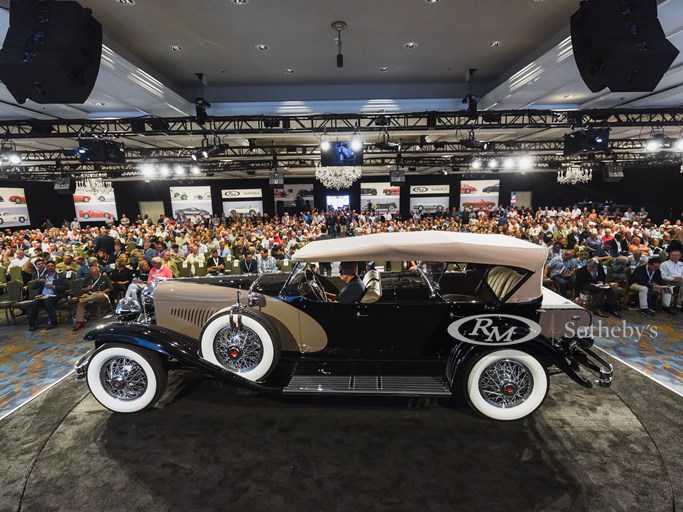 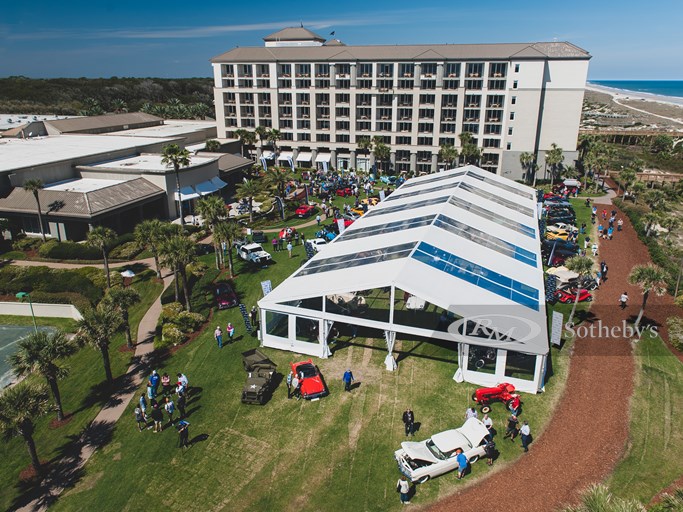 RM Sotheby’s saw strong attendance throughout the Thursday and Friday preview on the oceanfront lawn, which translated to a lively auction room energy during the first sale session on Friday evening. Additional lots from the highly anticipated single-owner Youngtimer Collection opened the sale to tremendous interest, with the very first lot, a 1993 Mazda RX-7, bringing an above-estimate $50,400 to set a record for the model at auction. Also from within the Collection, a 1996 Nissan 300ZX Twin Turbo sold for $53,200, a 1989 Mercedes-Benz 560 SEC AMG 6.0 “Wide-Body” reached $179,200, and a 1994 BMW 850 CSi achieved $184,800, all eclipsing or reaching the top end of high estimate. The most exciting moment during the Youngtimer cars arose when a highly original 1994 Toyota Supra Twin Turbo Targa, showing less than 11,200 miles from new, incited a contest between numerous bidders in the room and on the phones, eventually selling for a final $173,600 to well-exceed the current auction record for the stock model and cement the Supra as a staple of the next generation of collector cars (est. $100/120k).

RM Sotheby’s Saturday sale session was led by the top sale of the entire week, a 1965 Ferrari 275 GTB, which sold for a final price of $2,205,000. Meticulously restored by Motion Products, Inc., the award-winning 275 GTB retains its original, matching-numbers engine and is an ideal concours or rally competitor. Additional sports and racing highlights from Saturday include an incredibly authentic 1966 Shelby 427 Cobra with a mere 1,900 original miles, which sold for a final $1,792,500 to become the most valuable non-competition spec 427 Cobra ever sold at auction.

The remainder of the Saturday sale was highlighted by American and European Classic and Brass Era motor cars, a segment of the market which continues to bring healthy prices for exceptional examples. The 1930 Duesenberg Model J 'Sweep Panel' Dual-Cowl Phaeton, featuring a concours-quality restoration by the renowned Fran Roxas, was sold just after it crossed the auction podium for a final $1,650,000 to lead the group, while a stunning 1934 Packard Twelve Individual Custom Convertible Sedan brought a strong $1,325,000. European classics also performed well in Amelia Island, with an elegant 1926 Hispano-Suiza H6B Cabriolet Le Dandy achieving $1,353,500, and a highly attractive 1931 Rolls-Royce Phantom II Henley Roadster prompting a ten-minute bidding contest between multiple bidders in the room and on the phone before selling at a final $566,000 (est. $225/325k). Pre-war motor cars offered from the Richard L. Burdick Collection also brought significant interest on Saturday, with a unique wicker-bodied 1911 Napier 15 HP Victoria tripling its pre-sale estimate at a final $156,800 to great excitement from the packed auction room (est. $40/60k), while a 1924 Bentley 3-Litre Sports Two-Seater, a perennial winner of the Great American Race, also soared past estimate to $434,000 (est. $200/300k).

"We are pleased with the strong results of our sale this past weekend, which demonstrated once again that our Amelia Island auction remains the right venue for the successful sale of great cars across all segments of the market,” said Gord Duff, Global Head of Auctions, RM Sotheby’s, following the sale. “While certain staple cars of the auction market are experiencing softer demand in 2019, exceptional Classics and emerging collectibles are drawing sustained and new interest to the market. The next generation of collectors, whose tastes are exemplified by the cars of the Youngtimer Collection, not only expands the collector car auction market, but the hobby at large.”

The RM Sotheby’s Group returns to Florida, 29-30 March, for the company’s 17th annual Fort Lauderdale auction at the Broward County Convention Center. The two-day sale will present more than 350 quality collector cars, including several single-owner private collections offered without reserve. The digital preview catalogue for the Fort Lauderdale auction is now available at rmsothebys.com. The European calendar continues just weeks later as RM Sotheby’s stages the company’s first-ever German sale during Techno-Classica Essen, 11-12 April at the Messe Essen exhibition center. The Essen sale is set to present more than 200 diverse collector cars during the long-running Techno-Classica fair, recognized as the first great German car salon for vintage cars and collector vehicles. The complete Essen digital catalogue will be released in the coming week.

Complete results from RM Sotheby’s Amelia Island sale, as well as further details on upcoming auctions are available at rmsothebys.com.

1. Results are listed in USD and include buyer’s premium.
2. Results include select transactions that occurred immediately following the sale.