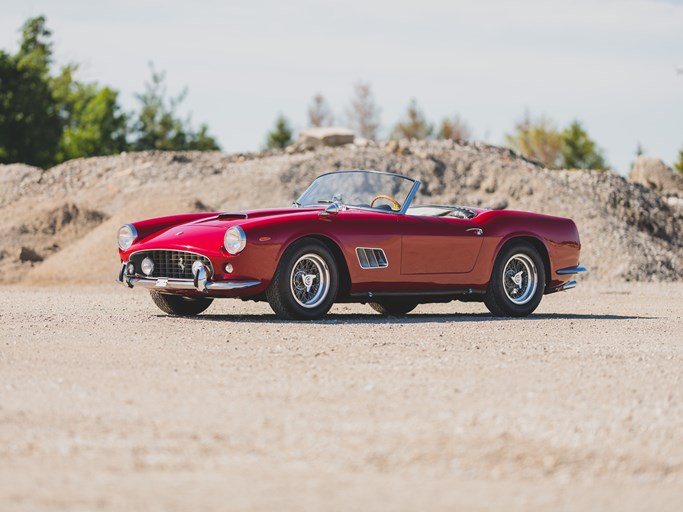 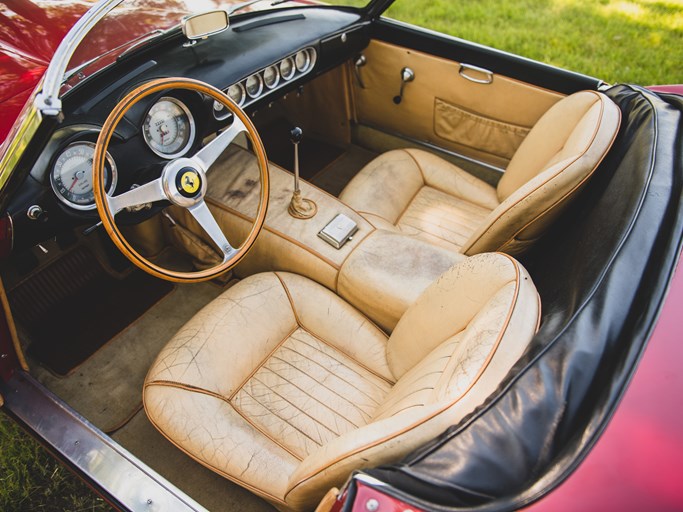 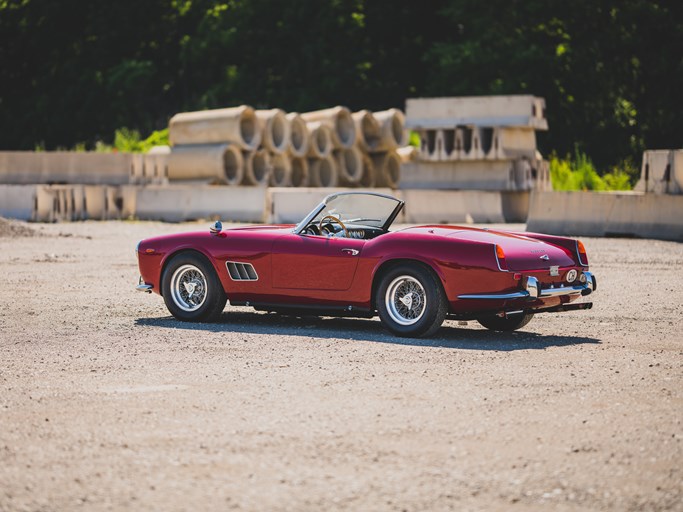 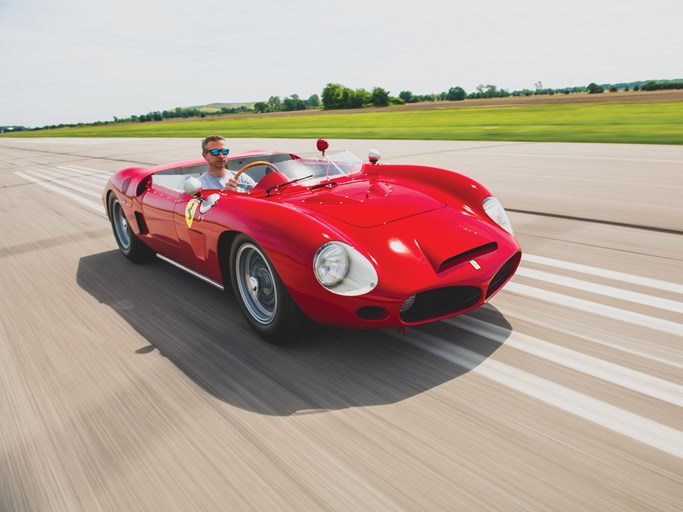 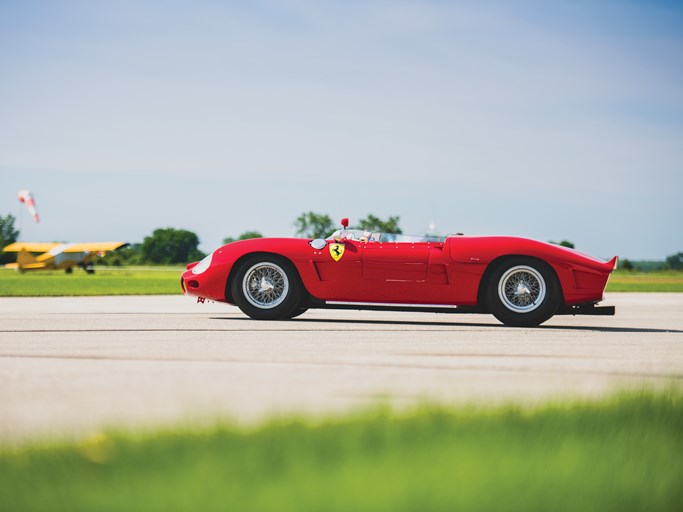 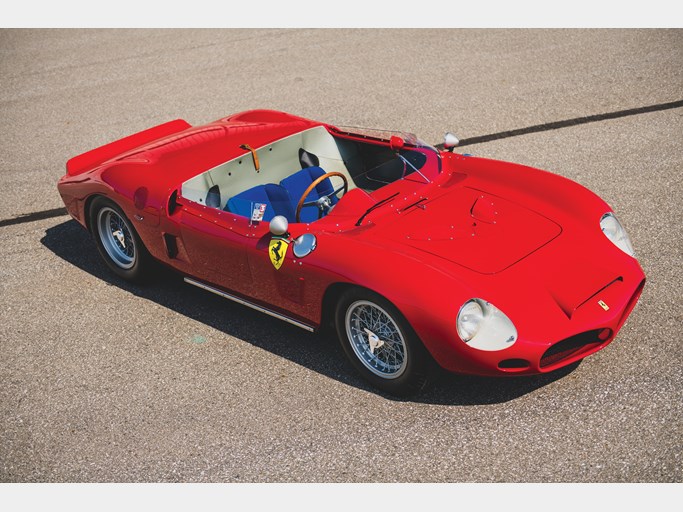 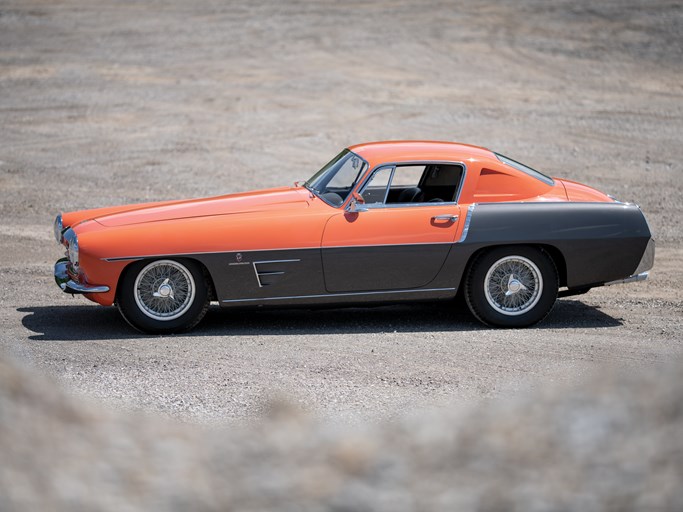 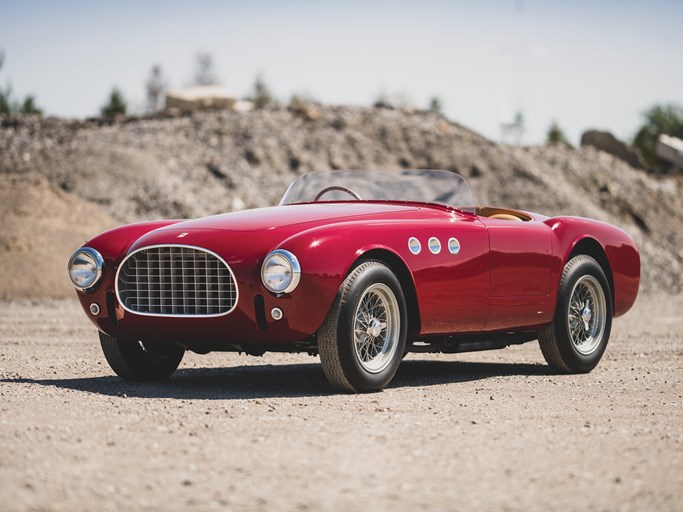 BLENHEIM, Ontario (28 June 2019) – RM Sotheby’s has secured a powerhouse lineup of Ferrari sports and racing cars of the 1950s and 60s for the company’s flagship Monterey auction, 15-17 August at the Monterey Conference Center in California. Each offered fresh to the market, all four cars represent some of the rarest models in the marque’s seven-decade history.

Leading the group is a 1962 Ferrari 250 SWB California Spider, chassis no. 4131, the second to last of all examples built and the only remaining unrestored SWB Cal Spider. Undoubtedly the most original, well-preserved example in the world, the Cal Spider is presented in its original colors and with its original interior. Delivered new to Switzerland, in 1971 the car passed to Canadian George Carrick, who used the car as the inspiration for his book The Spyder California, one of the first Ferrari books ever published on a particular model, which would go on to become the go-to resource for the car. Having had just four owners in the last 50 years, the SWB California Spider is offered in Monterey from more than 25 years of single ownership, in fully numbers-matching, Ferrari Classiche Certified condition (Est. $10,500,000 - $13,000,000).

From the road to the track, joining the California Spider is a 1962 Ferrari 196 SP, chassis no. 0806, the final of just six examples ever built and a mere five survivors. The 196 SP was campaigned initially by Luigi Chinetti’s North American Racing Team (N.A.R.T.) at the 1962 12 Hours of Sebring, where it finished 3rd in Class, and at the 1000KM Nürburgring piloted by Pedro and Ricardo Rodríguez as a Scuderia Ferrari Works entry. The car went on to enjoy a successful North American racing career in privateer hands, achieving a half dozen podium finishes and multiple class victories across nearly 20 races in period. The SP cars were Ferrari’s first mid-engine prototype cars and were integral to the evolution of the marque’s famed P-car series. This example is the last of its breed and has had just four private owners in the last 50 years, including time spent in some of the most significant private collections in the world, such as Pierre Bardinon’s former Mas du Clos Collection. The 196 SP is presented in concours-quality, race-ready condition, complete with its matching-numbers engine and worthy of the hobby’s finest events (Est. $8,000,000 - $10,000,000).

“Our Monterey sale has long been a venue associated with some of the rarest, most important Ferraris ever built, and 2019 continues the tradition,” says Gord Duff, Global Head of Auctions, RM Sotheby’s. “The Cal Spider is fascinating as the most original example in existence, and the 196 SP is an incredible racing machine that I’ve had the chance to drive and can say it’s on the button and ready to race again. Adding these special Ferraris to the already announced SWB Berlinetta—offered without reserve, the modern performance of the Ming Collection, the LaFerrari, the 275 GTB, 365 GTS, and more, has allowed us to put together a lineup of nearly 30 of the most significant Ferraris, period.”

The California Spider and the 196 SP will be offered alongside two additional sports and racing Ferraris of exceptional rarity; a 1955 Ferrari 375 MM Coupe Speciale and a 1952 Ferrari 225 Sport Spider. The 375 MM, chassis no. 0476 AM, wears a one-off, alloy body by Ghia, and is the final Ferrari ever bodied by the famed coachbuilder. One of just four 375 MM Berlinettas featuring special coachwork, the car is built on a full racing-spec 375 MM chassis and drivetrain and made its debut at the 1955 Turin Motor Show on the Ghia stand. Finished in its original configuration and complete with its original interior, the 375 MM appears to have covered just 13,000 original kilometers and is offered on the Peninsula from more than a decade of ownership in fully matching numbers, Ferrari Classiche Certified condition (Est. $5,000,000 - $7,000,000).

Finally, the 225 Sport Spider rounds out the prancing horses on offer. Chassis no. 0214 ED is one of just 12 examples of the model built with Vignale Spider coachwork and was originally raced in the UK by Irish publisher William ‘Bobbie’ Baird. Baird found success at the 1952 9 Hours of Goodwood, where the car finished 3rd Overall, co-driven by Roy Salvadori, as well as at the Daily Mail International Trophy, where it finished 4th Overall and 2nd in Class. The 225 was subsequently sold to Argentina, where it was raced successfully into the mid-1950s. The car is now offered from nearly two decades of single ownership and interestingly is one of a mere three Ferrari models that are eligible for all major vintage events; the Tour Auto, Le Mans Classic, Mille Miglia, and the Monaco Grand Prix Historique (Est. $4,000,000 - $5,000,000).

The sports and racing Ferraris join RM Sotheby’s exceptional Monterey lineup, which already includes the oldest car to wear the Porsche name, a 1939 Porsche Type 64, alongside an original James Bond Aston Martin DB5. Held during the world-famous Pebble Beach Concours d’Elegance motoring week, RM Sotheby’s Monterey sale (15-17 August) has been the pinnacle of collector car auctions for more than 30 years, leading the field and raising the bar with its consistent, record-setting results. This year’s Monterey sale will once again present more than 150 of the world’s most important motor cars in the ultimate collector car destination, featuring a special third auction evening on 15 August. ‘An Evening with Aston Martin’ will feature more than 30 of the world’s most sought-after road-going and track-ready Aston Martin sports cars from across the marque’s illustrious history.

For further information on RM Sotheby’s 2019 Monterey auction and to view a frequently updated list of entries, please visit rmsothebys.com. Interested consignors are invited to call RM Sotheby’s global headquarters at +1 519 352 4575 to speak with a car specialist about very limited remaining availability.