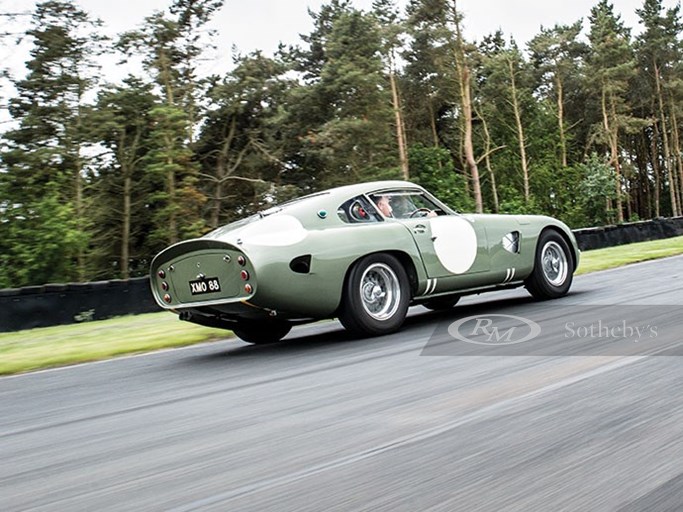 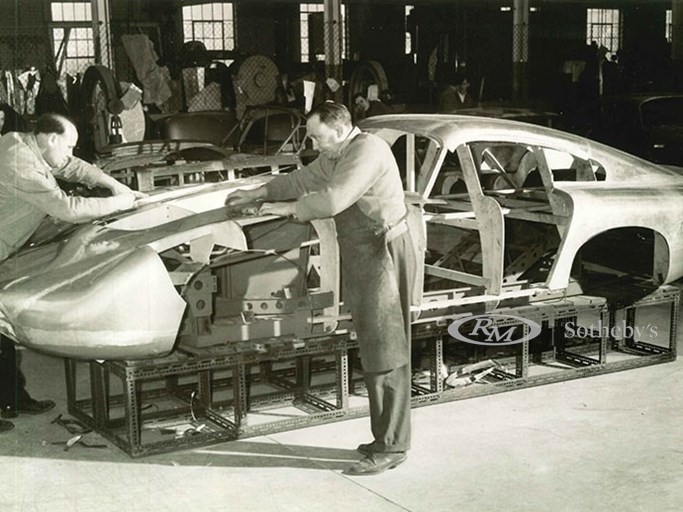 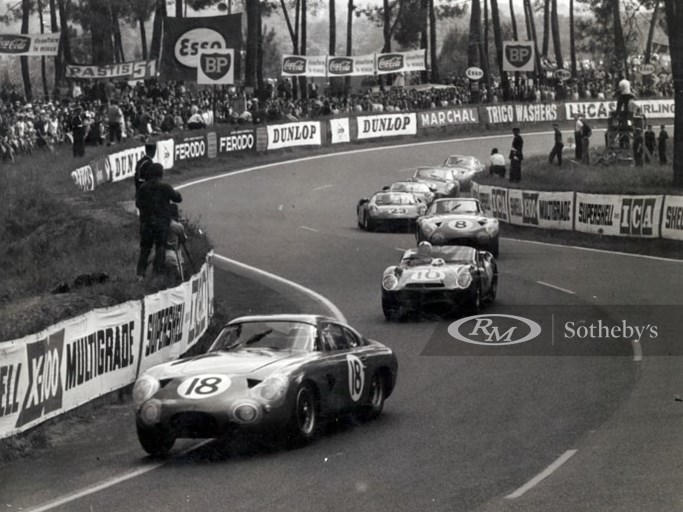 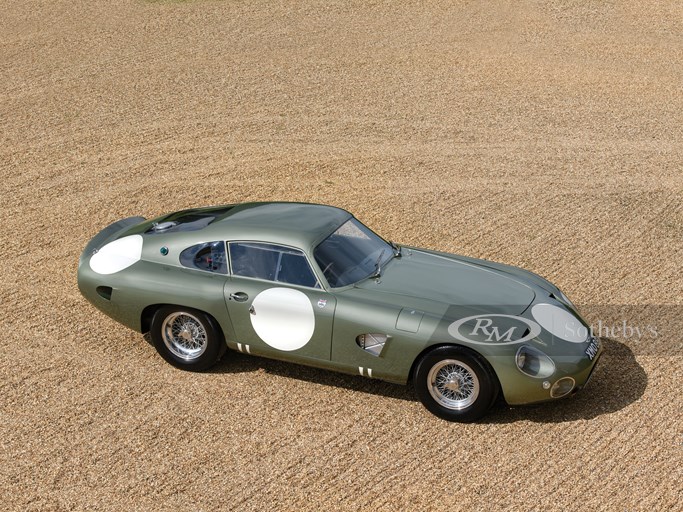 Another view of the stunning 1963 Aston Martin DP215 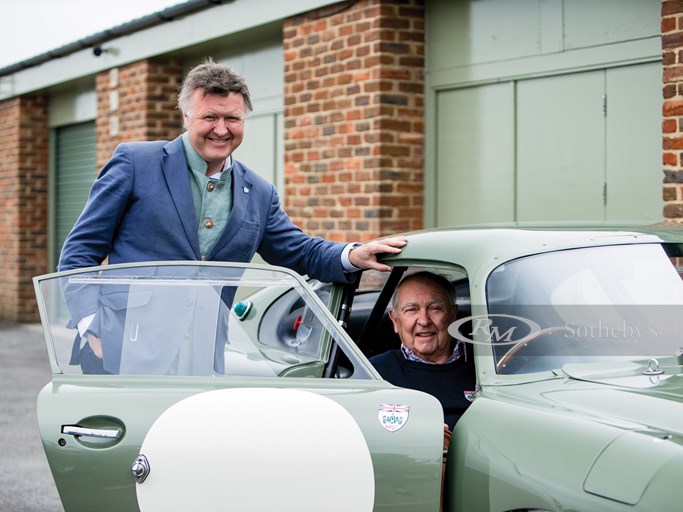 BLENHEIM, Ontario (10 July 2018) – In what is to be its most historic lineup to date, RM Sotheby’s has announced the addition of the 1963 Aston Martin DP215 Grand Touring Competition Prototype to its flagship Monterey sale, set for 24-25 August at the Monterey Conference Center in California. The Aston Martin joins the previously announced 1962 Ferrari 250 GTO and 1966 Ford GT40 to represent the pinnacle of racing performance for each of these legendary marques from the golden age of motorsport.

DP215 was the pinnacle achievement for Aston Martin’s racing program, approved by David Brown in March 1963, ordered directly by John Wyer, designed by chief engineer Ted Cutting and fitted with an engine by Tadek Marek as the final racing car built by the factory in the Brown era. By no means a converted road car, this was the ultimate evolution of Aston Martin’s racing program, and the last of the four completely one-off “Development Project” cars, with its sights set squarely on the famed 24 Hours of Le Mans just two months away. Ultra-lightweight, with a four-liter version of the DP212 engine set farther back in the chassis and cutting-edge wind tunnel-tested aerodynamics, the car was piloted by American ace driver Phil Hill, a three-time Le Mans-winner and the first ever American Formula 1 World Champion, paired with Belgian Grand Prix and endurance-racing veteran Lucien Bianchi. What the pair achieved is almost unfathomable, clocking a staggering 198.6 mph along the famed Mulsanne Straight—becoming the first car to officially break the 300 kph barrier at Le Mans.

Following its racing career, DP215 has always enjoyed a well-documented and illustrious chain of enthusiast owners, who in later years even engaged Ted Cutting himself to consult on and approve the authenticity of the car’s long-term restoration. The current owners, Neil and Nigel Corner, vintage racing drivers of considerable renown and expertise, perfected the car’s restoration by reuniting DP215 with its original engine, 400/215/1, which was separated from the chassis very early in the car’s history but is indeed the very powerplant with which Phil Hill raced at Le Mans. DP215 is expected to bring $18,000,000 to $22,000,000 when it crosses the podium at Monterey.

Neil Corner comments: “Ted Cutting designed these project cars and has fully blessed DP215’s restoration. I will always remember when I asked him what his proudest achievement was during his magnificent career with Aston Martin and he replied that DP215’s design and its recorded speed at Le Mans eclipsed even his pride in winning the World Sports Car Championship in 1959 with the DBR1s. This was the fastest speed ever recorded by a front engine car on the old course at Le Mans.”

“The lines of the car are absolute perfection. You can see where its outstanding maximum speed came from. What’s more, its performance cannot be overemphasized - from a driving point of view, the acceleration in 2nd and 3rd gears always caused the hairs on the back of my hand to stand up. The car feels like a thoroughbred to drive – the steering is delightfully light, the brakes are outstanding for the era, and there’s nothing quite like the bark of its incredible exhaust note. I’ve driven DP215 everywhere, from rush hour traffic in the busy streets of Paris to full speed on some of the world’s greatest circuits, and I can attest that its performance is unbelievable on road or track. I hope that DP215’s next custodian drives and enjoys the car as much as I have.”

Alain Squindo, Chief Operating Officer, RM Sotheby’s Group adds: “The DP cars are completely one-off competition projects and are essentially on their own level when it comes to Aston Martin racing royalty. DP215 is the pinnacle of the Works team’s racing development, and the new owner will acquire a car that is not only extraordinarily special but also more capable of running at the front of the pack than virtually any other racing car on the market. We’ve had the pleasure of offering some of the world’s most important Aston Martins at auction, including the record-setting DBR1/1 and the DB4GT Prototype at Monterey just last year, and we’re tremendously honored to add DP215 to that list.”

Held during the world-famous Pebble Beach Concours d’Elegance motoring week, RM Sotheby’s Monterey sale (24-25 August), has been the pinnacle of collector car auctions for more than 30 years, leading the field and raising the bar with its consistent, record-setting results. This year’s Monterey sale is set at the newly reopened Monterey Conference Center following its $60-million-dollar renovation, offering collectors a stunning new experience and a beautiful space for the display and offering of more than 120 of the world’s most important motor cars in the ultimate collector car destination. For additional information on DP215, further event information, and an updated list of entries, or to register to bid for the Monterey sale, please visit rmsothebys.com. To speak with an RM Sotheby’s car specialist about final opportunities to enter an exceptional car in the auction, please call +1 519 352 4575.